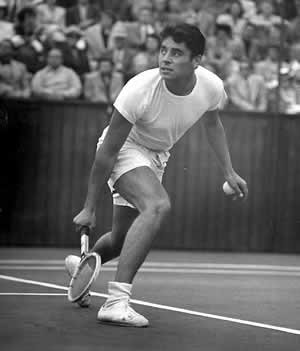 Ricardo Alonso González (1928 – 1995),  usually known as Pancho Gonzales, was an American tennis player. He was a successful amateur player in the late-1940s, twice winning the United States Championships.  He went on to be the World No. 1 professional tennis player for an unequalled eight years in the 1950s and early 1960s. He won two Major titles and fifteen Pro Slam titles, the Wembley professional title in London four times, and the Tournament of Champions three times.  He is still widely considered to be one of the greatest players in the history of the game.

During this time Gonzales was known for his fiery will to win, his cannonball serve, and his all-conquering net game, a combination so potent that the rules on the professional tour were briefly changed to prohibit him from advancing to the net immediately after serving. Under the new rules, the returned serve had to bounce before the server could make his own first shot, thereby keeping Gonzales from playing his usual serve-and-volley game. He won even so, and the rules were changed back. 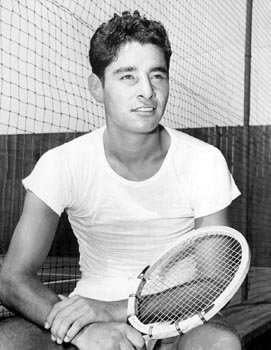 Gonzales was largely self-taught.  He was given a 51-cent racquet by his mother when he was 12 years old and  taught himself to play by watching other players on the public courts at nearby Exposition Park in Los Angeles. He was ostracised for his Mexican roots by the Los Angeles tennis club and spent some time rebelling.  He was arrested for burglary at age 15 and spent a year in detention. He then joined the Navy just as World War II was ending and served for two years, finally receiving a bad-conduct discharge in 1947.  He had a reputation for being a loner and somewhat difficult.  His private life ended up as controversial as his public one.  Gonzales married and divorced six times and had eight children.

I have not put many athletes on this website, even though it is clear that inspiration comes to athletes just as it does to artists.  The reason is that it is more difficult with an athlete to separate sheer hard graft from inspiration, the slog of endless hours of practise from natural talent.  But Gonzales had natural talent and was at times inspired and 'helped'.

So great was his ability to raise his game to the highest possible level, particularly in the fifth set of long matches, Allen Fox has said that he never once saw Gonzales lose service when serving for the set or the match.

Gonzales is the greatest natural athlete tennis has ever known. The way he can move that 6-foot-3-inch frame of his around the court is almost unbelievable. He's just like a big cat... Pancho's reflexes and reactions are God-given talents. He can be moving in one direction and in the split second it takes him to see that the ball is hit to his weak side, he's able to throw his physical mechanism in reverse and get to the ball in time to reach it with his racket.

There is a sad ending to this story of 'God given talent'.  Gonzales died of cancer in Las Vegas on July 3, 1995, in poverty and almost friendless, estranged from his ex-wives and children.