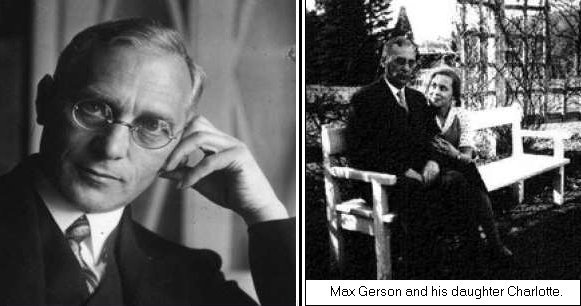 Max Gerson (October 18, 1881– March 8, 1959) was a German-born American physician who developed the Gerson Therapy, a dietary therapy.  Gerson originally had considerable success using the therapy with tuberculosis and migraine and then extended the approach to help and provide support for cancer patients.  The diet is principally a vegetarian diet, based on vegetable juices, [vegetable smoothies], liver and eggs.

Gerson believed that most illnesses and diseases are caused by ‘invaders’ - toxins, parasites, bacteria, viruses and fungi [and pharmaceuticals].  Thus in order to help the patient you had to attack the cause, and one way was to ‘flush’ the culprits out of the system using juices and water, and boost the immune system to the point where it could fight all these invaders.  There were admittedly some rather more unsavoury aspects to this flushing approach which involved enemas [not colonic irrigation but simply enemas to reduce blockages in the rectal passage]. But the principle is not dissimilar to that promoted in chelation therapy.

If you read the Wikipedia entry for Gerson they hammer him, calling the therapy unproven, dangerous, that his methodology is ‘unconvincing’, that his therapy has not been independently tested or subjected to randomized controlled trials, and noting it is illegal to market in the United States.  So scary is the description, that one starts to wonder, firstly who the writers were being paid by to write such vitriol about what is essentially a vegetarian diet and secondly, whether what is written is true.

One of the main problems appears to be that the Institute founded by Gerson’s daughter, and now running as a separate entity, appears to issue statements that they have ‘cured’ cancer.  When Gerson originally tried his therapy with cancer patients, they were dying.  What appears to have happened is that if not cured, their lives were extended without the use of pharmaceuticals.  And so it is today:
“An investigation found that the institute's claims of cure were based not on actual documentation of survival, but on a combination of the doctor's estimate that the departing patient had a 'reasonable chance of surviving', plus feelings that the Institute staff have about the status of people who call in.”

So they aren’t cured, but they go away feeling better.  Gerson described his approach in the book A Cancer Therapy: Results of 50 Cases.   And note that he does not call his book cancer cures, simply cancer therapy.  By the time someone has cancer, the invading substance has got a considerable hold on the system and ‘cure’ is often almost impossible.  Chemotherapy, which is a great deal more unpleasant than a vegetarian diet and an enema, rarely cures either.  It buys time.  And it appears this was Gerson’s aim originally too.  It is worth quoting this medical paper from the International Journal of cancer and to be found on Pubmed

Int J Cancer Suppl. 1998;11:69-72.  Alternative nutritional cancer therapies.  Weitzman S.
Increasing attention is being paid to the role of nutrition in cancer. Dietary measures, such as decreased consumption of calories, fat, alcohol and smoked or pickled foods have been shown to reduce the incidence of specific "adult" cancers, while increased dietary fiber appears to have a protective role. However, no clear scientific evidence exists that dietary manipulation is a successful primary therapy for established cancer. A significant percentage of adult and child cancer patients take unproven therapies during their illness. Alternative nutritional therapies, of which there is a wide variety, are the commonest of these reflecting current public interest in "natural" remedies. The efficacy and potential toxicity of commonly utilized dietary therapies are here reviewed, in particular the macrobiotic philosophy, the Gerson diet, the Livingstone diet, and the use of vitamin and mineral therapy. While details may differ, most alternative approaches involve fresh whole foods, with strong emphasis on low-fat vegetarian diet. Most are nutritionally adequate, at least for adults.
No anti-cancer diet has been shown to cure established cancers, even those whose incidence is decreased by dietary changes.
Careful dietary manipulation may at least improve quality of life for adult cancer patients, and, together with conventional therapy, may prolong survival in selected cancer patients.
Assessment by carefully controlled prospective clinical trials is essential; those in pediatric patients must be controlled very strictly, since tumors in children have not been shown to be influenced by diet, and the diets described may be inadequate for children with malignant disease.  PMID:  9876483

Gerson was born in Wongrowitz (Wągrowiec, now in Poland) on October 18, 1881. In 1909, he graduated from the Albert-Ludwigs-Universität Freiburg. He began practicing medicine at age 28 in Breslau (Wrocław, now in Poland), later specializing in internal medicine and nerve diseases in Bielefeld.  He left Germany in 1933 and emigrated first to Vienna, where he worked in the West End Sanatorium. Gerson spent two years in Vienna, then in 1935 he went to France, associating with a clinic near Paris before moving to London in 1936.   Gerson emigrated to the United States in 1936, passed his medical board examination, and became a U.S. citizen in 1942.

In the U.S., Gerson applied his dietary therapy to several cancer patients, claiming ‘good results’, not a cure note, but good results meaning alleviation, reprieve.  But the USA is not a good place to be practising medicine based on vegetables, vegetables are inexpensive and require no expensive medical treatment or pharmaceuticals, - no one is likely to become rich from prescribing vegetables - as such he was bound to come in conflict with the vested interests of the pharmaceutical/medical community.  There are claims and counter claims about what happened but he was never going to win this battle.  In 1953, Gerson's malpractice insurance was discontinued and, in 1958, his medical license in New York was suspended for two years.  Gerson died March 8, 1959 of pneumonia.

Let us look objectively at what Gerson proposed.

The belief that disease is caused by the accumulation of ‘toxins’ is well proven as is evident from this site.  Look at any disease I have listed and the cause is indeed ‘invaders’ - toxins, parasites, bacteria, viruses and fungi and pharmaceuticals, so he was proven correct.  The use of a predominantly vegetarian diet including hourly glasses of organic juice, is also sound, as the flushing process is then continuous and there are no peaks and troughs in energy supply and blood glucose levels.  You need no dietary supplements as long as you can find the right fruit and vegetables, but in 1930s Europe and in Germany, things were pretty bad and dietary supplements probably were needed.  They would not be needed today as long as the source of the vegetables was organic. 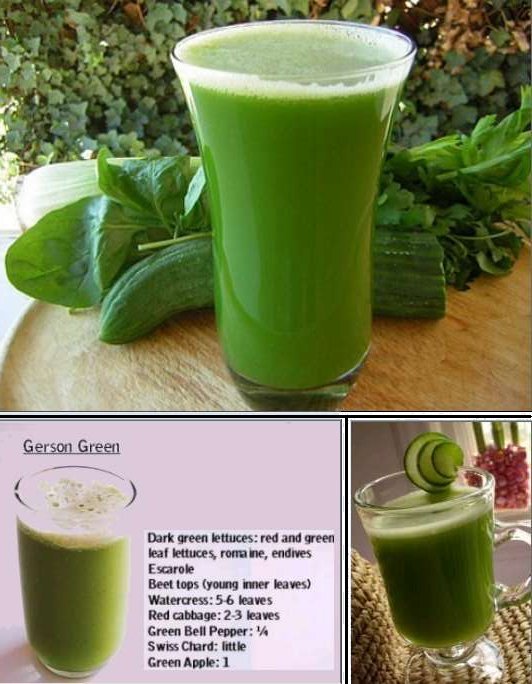 Although the diet is initially vegetarian, meat fish and dairy products are gradually reintroduced after a few weeks, once the immune system has been bolstered and the lymph system has been activated to remove the toxins.  The problem with any all vegetarian diet is that some essential vitamins and amino acids are not present.

Why did Gerson propose a vegetarian diet?  I have no proof, but healing of anyone requires one to be open to spiritual input and meat is well known to ‘ground’ you, especially red meat.  I don’t know why, but it just does.  Thus Gerson was trying to get people more spiritually open and by being spiritually open, they were more open to heal themselves.

No doctor in the USA at the time would have understood this, although the entire Native American population plus the healers active there would have done.  People like Edgar Cayce went almost entirely vegetarian.

One of the key vitamins for healing is Vitamin B12.  Vitamin B12 is a water-soluble vitamin with a key role in the normal functioning of the brain and nervous system, and for the formation of blood. It is involved in the metabolism of every cell of the human body, especially affecting DNA synthesis and regulation, but also fatty acid synthesis (especially odd chain fatty acids) and energy production.  It is found in red meat, thus if you exclude red meat from the diet you risk being Vitamin B12 deficient.

But other sources include eggs and offal, fish and shellfish.  And the Gerson diet includes liver and eggs.  Both eggs and liver have the added benefit of containing choline.  Choline is an absolutely key mineral in the fight against disease.

Another key mineral to help with cell problems and the boosting of the immune system is Zinc.  Zinc too is to be found in red meat, but it is also plentiful in seeds, oysters, offal especially liver and eggs.

In effect the whole Gerson diet involves the use of vitamins and minerals to repair damaged cells and boost the immune system, together with the use of spiritual input to help the healing process, plus water to help in the flushing out of the invaders attacking the system.

It is based on the wish to cure, but whether it cures is dependent on the immune system of the patient and how open they are to getting healing energy.  These days the suppression techniques on this site – laughing, relaxation, being naked in the sun, gentle exercise, would be a good adjunct to help.

Perhaps the only practise I found a bit dubious in his approach was the use of some very odd enemas, the logic of which I cannot at the moment work out.  But if there really is a blockage of the lower rectal passage, water is as good as anything else to help soften up any blocked faeces and remove them and help the removal of all those nasty dead bacteria, viruses and parasites your immune system has killed.

Gerson was thus a rather special pioneer.  It hardly matters if his diet has been banned in the USA, you can use this site to find out from the foods and medicines in the suppression section, which vitamins and minerals you need and where to get them.  And this site is free.   If you have access to a clinic, then the advantage with a clinic is that you will be given a nutritionally balanced diet suited to your needs and monitored, and someone will prepare your food for you - a chance to relax.