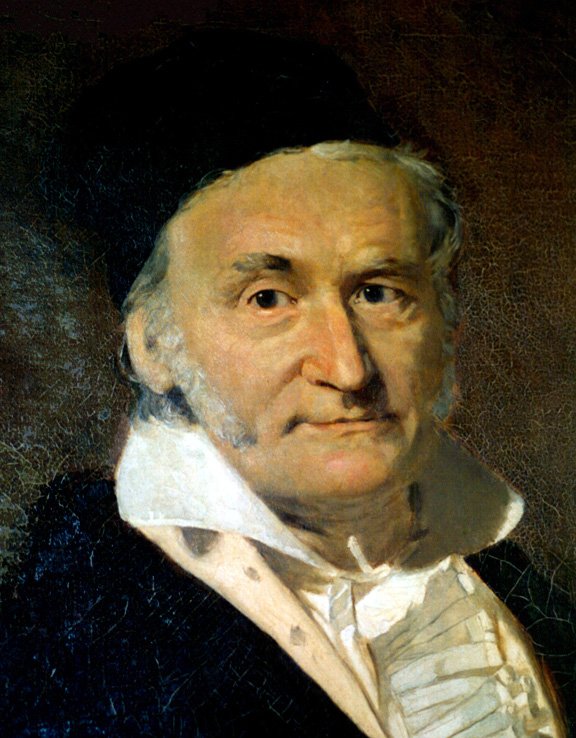 There are two things worth pointing out from his portrait.  Firstly despite the hat, we can see he is left handed by his parting.  Second his face shape is most uneven leading one to suspect his was a difficult birth – meaning he would have had an unusual brain configuration – more right than left. The right brain is the one that favours mathematics and music.

Carl Friedrich Gauss was born on 30 April 1777 in Brunswick (Braunschweig), in the Duchy of Brunswick-Wolfenbüttel (now part of Lower Saxony, Germany), as the son of poor working-class parents. His mother was illiterate and never recorded the date of his birth, remembering only that he had been born on a Wednesday, eight days before the Feast of the Ascension, which itself occurs 40 days after Easter. Gauss would later solve this puzzle about his birthdate in the context of finding the date of Easter, deriving methods to compute the date in both past and future years. 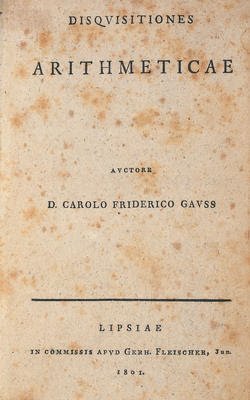 Gauss was a child prodigy. There are many anecdotes about his precocity while a toddler, and he made his first ground-breaking mathematical discoveries while still a teenager. He completed Disquisitiones Arithmeticae, his magnum opus, in 1798 at the age of 21, though it was not published until 1801. This work was fundamental in consolidating number theory as a discipline and has shaped the field to the present day.

Gauss's intellectual abilities attracted the attention of the Duke of Brunswick, who sent him to the Collegium Carolinum, which he attended from 1792 to 1795, and to the University of Göttingen from 1795 to 1798. While at university, Gauss independently rediscovered several important theorems; his breakthrough occurred in 1796 when he showed that any regular polygon with a number of sides which is a Fermat prime can be constructed by compass and straightedge. This was a major discovery in an important field of mathematics; construction problems had occupied mathematicians since the days of the Ancient Greeks, and the discovery ultimately led Gauss to choose mathematics instead of philology as a career.

Gauss's genius was marked by personal tragedy.  First there was the early death in 1809, of his first wife, Johanna Osthoff with whom he had three children.  This was soon followed by the death of one child, Louis. Gauss plunged into a depression from which he never fully recovered. He married again, to Johanna's best friend Friederica Wilhelmine Waldeck with whom he also had three children. When his second wife died in 1831 after a long illness, one of his daughters, Therese, took over the household and cared for Gauss until the end of his life. 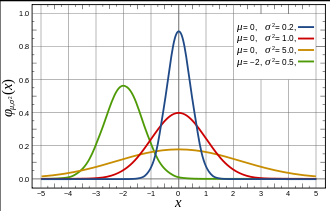 What was he like as a man?  Firstly, Gauss was a generous man with his praise and support.  In 1854, for example, Gauss selected the topic for Bernhard Riemann's Habilitationvortrag.  On the way home from Riemann's lecture, Weber reported that Gauss was full of praise and excitement.  Gauss was also lacking in any ego regarding his discoveries and was more than willing to collaborate with others.  In 1831, for example, he developed a fruitful collaboration with the physics professor Wilhelm Weber, leading to new knowledge in magnetism and the discovery of Kirchhoff's circuit laws in electricity.  He also made deep life long friendships – Gauss, for example, swore "brotherhood and the banner of truth" as a student with his friend Farkas Wolfgang Bolyai. 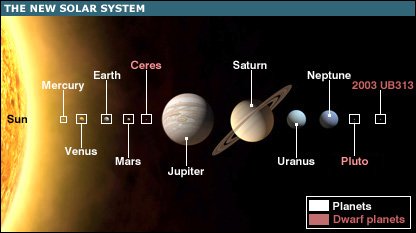 Then he was also driven by a need to help people, he liked to help in solving problems for people and rarely if ever wanted any credit.  He helped Italian astronomer Giuseppe Piazzi, for example, re-discover the dwarf planet Ceres. Piazzi discovered the planet, but could only track Ceres for about a month, then it disappeared temporarily behind the Sun. Several months later, when Ceres should have reappeared, Piazzi could not locate it: the mathematical methods of the time were not able to help him extrapolate a position.  Gauss, who was 24 at the time, heard about the problem and tackled it for him. After three months of intense work, he predicted a position for Ceres about a year after its first sighting—and it was rediscovered by Franz Xaver von Zach.  Zach noted that "without the intelligent work and calculations of Doctor Gauss we might not have found Ceres again".

Gauss made numerous discoveries which he seems to have never publicised nor taken credit for.  The fast Fourier transform is traditionally attributed to a 1965 paper by J. W. Cooley and J. W. Tukey, but Gauss developed it as a trigonometric interpolation method. His paper, Theoria Interpolationis Methodo Nova Tractata, was only published posthumously in Volume 3 of his collected works. This paper predates the first presentation by Joseph Fourier on the subject in 1807. 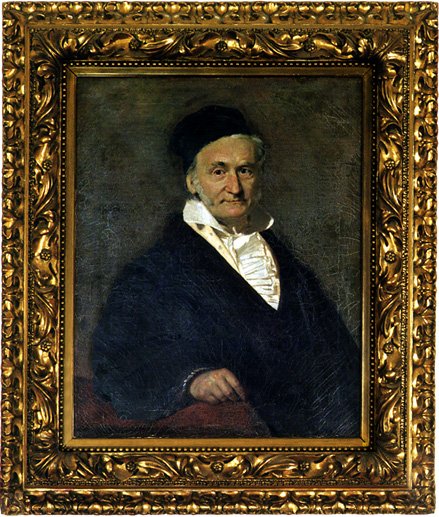 Gauss was an ardent perfectionist and a hard worker. He was never a prolific writer, refusing to publish work which he did not consider complete and above criticism. This was in keeping with his personal motto pauca sed matura ("few, but ripe"). His personal diaries indicate that he had made several important mathematical discoveries years or decades before his contemporaries published them. Mathematical historian Eric Temple Bell estimated that, had Gauss published all of his discoveries in a timely manner, he would have advanced mathematics by fifty years.

Perhaps of greatest importance is that Gauss believed fervently in the existence of a spiritual world.

Guy Waldo Dunnington (1955). Carl Friedrich Gauss, Titan of Science: A Study of His Life and Work.

For him science was the means of exposing the immortal nucleus of the human soul. In the days of his full strength it furnished him recreation and, by the prospects which it opened up to him, gave consolation. Toward the end of his life it brought him confidence. Gauss' God was not a cold and distant figment of metaphysics, nor a distorted caricature of embittered theology. To man is not vouchsafed that fullness of knowledge which would warrant his arrogantly holding that his blurred vision is the full light and that there can be none other which might report truth as does his. For Gauss, not he who mumbles his creed, but he who lives it, is accepted. He believed that a life worthily spent here on earth is the best, the only, preparation for heaven. Religion is not a question of literature, but of life. God's revelation is continuous, not contained in tablets of stone or sacred parchment. A book is inspired when it inspires. The unshakeable idea of personal continuance after death, the firm belief in a last regulator of things, in an eternal, just, omniscient, omnipotent God, formed the basis of his religious life, which harmonized completely with his scientific research.


Overall one gets the impression of a practising Christian, uninterested in dogma and creeds, but one who recognised the benefits of following the teachings of Jesus as opposed to theologians:

Gauss …..devoted considerable time to the New Testament in the original Greek.  [His] religious consciousness was based on an insatiable thirst for truth and a deep feeling of justice extending to intellectual as well as material goods. He conceived spiritual life in the whole universe as a great system of law penetrated by eternal truth, and from this source he gained the firm confidence that death does not end all.

Gauss also strongly upheld religious tolerance, believing "that one is not justified in disturbing another's religious belief, in which they find consolation for earthly sorrows, in time of trouble."

Gauss declared he firmly believed in the afterlife, and saw spirituality as something essentially important for human beings.  He was quoted stating:  "The world would be nonsense, the whole creation an absurdity without immortality." 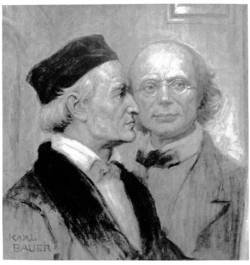 The observation I have for him also confirms that he used inspiration as a principle means of scientific discovery.  He did not invent, he discovered truths already in existence.  His methods were based on suppressing desires, suppressing the ego; eliminating, on a temporary basis, all reasoning and intellectual pursuit and then letting the solution come to him in a moment of relaxation or recreation.

And by this method he discovered some extraordinary things.

On 8 April 1796, for example, he became the first to prove the quadratic reciprocity law. This remarkably general law allows mathematicians to determine the solvability of any quadratic equation in modular arithmetic.

Gauss also discovered that every positive integer is representable as a sum of at most three triangular numbers on 10 July and then jotted down in his diary the note: "ΕΥΡΗΚΑ! num = Δ + Δ + Δ". On October 1 he published a result on the number of solutions of polynomials with coefficients in finite fields, which 150 years later led to the Weil conjectures.

Gauss also made important contributions to number theory with his 1801 book Disquisitiones Arithmeticae (Latin, Arithmetical Investigations), which, among other things, introduced the symbol ≡ for congruence and used it in a clean presentation of modular arithmetic, contained the first two proofs of the law of quadratic reciprocity, developed the theories of binary and ternary quadratic forms, stated the class number problem for them, and showed that a regular heptadecagon (17-sided polygon) can be constructed with straightedge and compass.

A lot can be achieved by belief in the spiritual realm and the squashing of the ego.

Gauss died in Göttingen, in the Kingdom of Hanover (now part of Lower Saxony, Germany) on 23 February 1855.