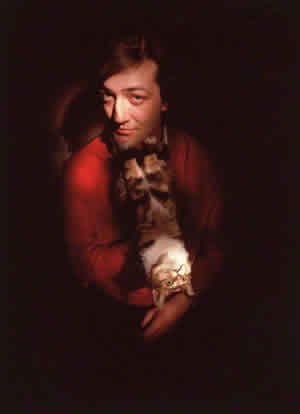 With Hugh Laurie, as the comedy double act Fry and Laurie, he co-wrote and co-starred in A Bit of Fry & Laurie, and the duo also played the title roles in Jeeves and Wooster.  As a solo actor, Fry played the lead in the film Wilde, was Melchett in the BBC television series Blackadder, starred as the title character Peter Kingdom in the ITV series Kingdom, and was the host of the quiz show QI. Apart from his work in television, Fry has contributed columns and articles for newspapers and magazines, and has written four novels and two volumes of autobiography.

He also has bipolar disorder possibly brought on by his schooling.

Fry briefly attended Cawston Primary School, Cawston, Norfolk, described later in his 1997 book Moab Is My Washpot, before going on to Stouts Hill Preparatory School at the age of seven, and then to Uppingham School, Rutland, where he joined Fircroft house. His time there was deeply unhappy.

He was expelled from Uppingham when he was 15, and subsequently from Paston School.