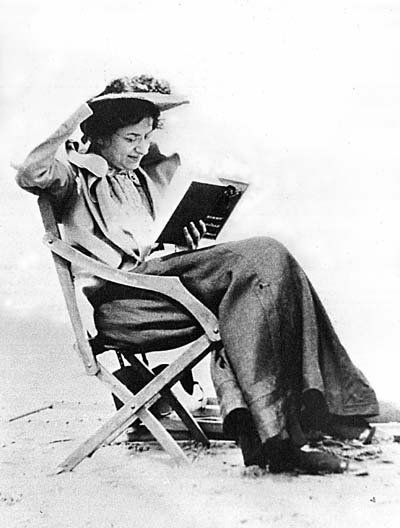 She won many literary awards and the Eleanor Farjeon Award for children's literature is presented annually in her memory by the Children's Book Circle, a society of publishers.

Her work is cited as an influence by the Japanese animator Hayao Miyazaki, which is significant in the context of this site, as all his films have spiritual themes.

Today, Eleanor Farjeon's most widely known musical work is the children's hymn "Morning has Broken", written in 1931, but she was multi-talented.  One of Farjeon's talents was to make history easy and memorable for children by using poetry.  Farjeon's plays for children were popular for school performances throughout the 1950s and '60s because they were well within the capabilities of young children to perform and of teachers to direct. Eleanor Farjeon's most notable books are Martin Pippin in the Apple Orchard (1921) and its sequel, Martin Pippin in the Daisy Field (1937). 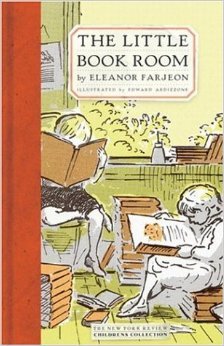 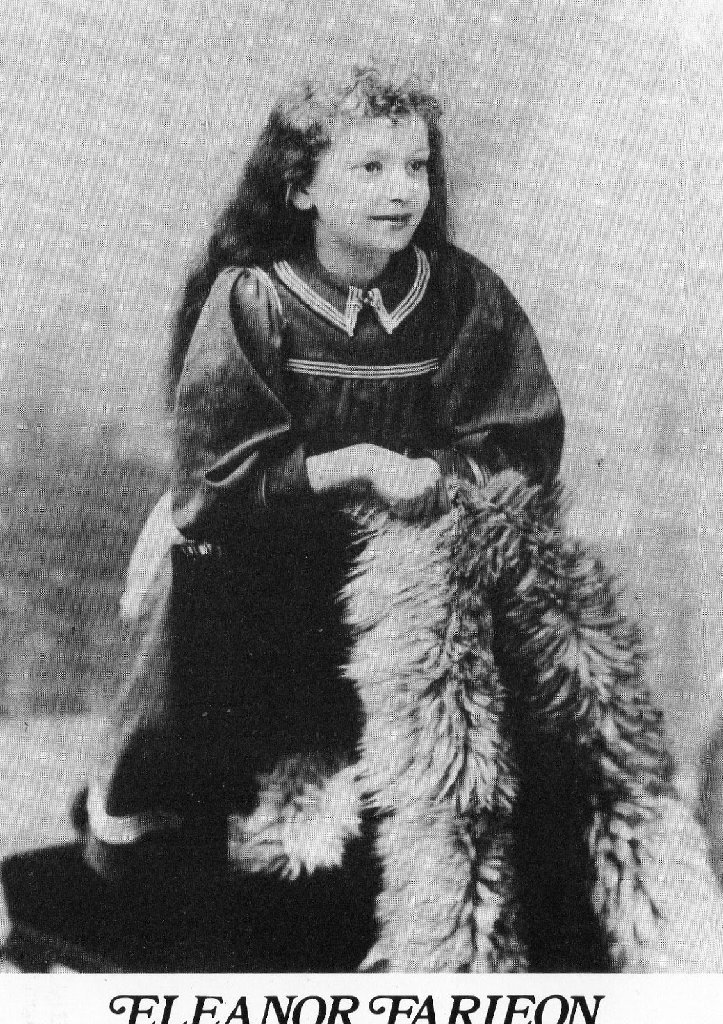 Eleanor Farjeon was born in London, England on 13 February 1881. Eleanor came from a literary family, her two younger brothers, Joseph and Herbert Farjeon, being writers, while the oldest, Harry Farjeon, was a composer.

Eleanor, known to the family as "Nellie", was a small timid child, who had poor eyesight and suffered from ill-health throughout her childhood. She was educated at home, spending much of her time in the attic, surrounded by books. Her father encouraged her writing from the age of five. She describes her family and her childhood in the autobiographical, A Nursery in the Nineties (1935).

She and her brother Harry were especially close. Beginning when Eleanor was five, they began a sustained imaginative game in which they became various characters from theatrical plays and literature. This game, called T.A.R. after the initials of two of the original characters, lasted into their mid-twenties. Eleanor credited this game with giving her "the flow of ease which makes writing a delight". 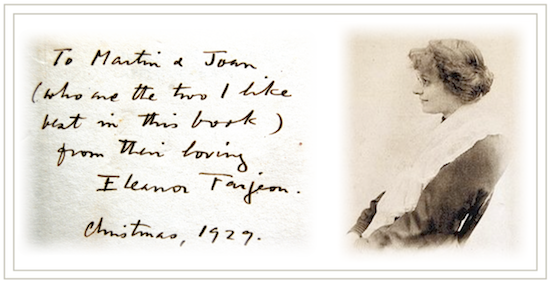 Although she lived much of her life among the literary and theatrical circles of London, much of Eleanor's inspiration came from her childhood and from family holidays. A holiday in France in 1907 was to inspire her to create a story of a troubadour, later refashioned as the wandering minstrel of her most famous book, Martin Pippin in the Apple Orchard. Among her earliest publications is a volume of poems called Pan Worship, published in 1908, and Nursery Rhymes of London Town from 1916. During World War I, the family moved to Sussex where the landscape, villages and local traditions were to have a profound effect upon her later writing. It was in Sussex that the Martin Pippin stories were eventually to be located.

Eleanor had a wide range of friends with great literary talent including D. H. Lawrence, Walter de la Mare and Robert Frost.  After World War I Eleanor earned a living as a poet, journalist and broadcaster. 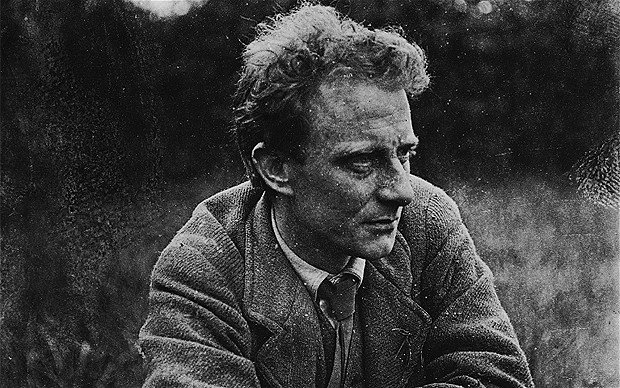 So what was her inspiration?

For several years she had a ‘close friendship’ with the poet Edward Thomas and his wife. He was not an easy person to be with, but Eleanor loved Edward, but knew that expressing her feelings to him would mean the immediate end of their friendship.

Unfulfilled, ... convinced he was a failure in both his career and his marriage, Thomas was prey to fits of black depression ......But though his raging discontent made him monstrously cruel to his wife - ‘Your sympathy and your love are both hateful to me. Hate me, but for God’s sake don’t stand there, pale and suffering’ - he was, when in full command of himself, a gentle and sweet-hearted man.

Eleanor and Edward often visited each other and went on long country walks together. She typed his poems for him and submitted them, on his behalf, under the pseudonym of Edward Eastaway, to various publications.

Helen was aware of Eleanor's feelings towards Edward and was 'perfectly content' with the situation, believing that it might help to make Edward a little happier.  But tragedy struck. 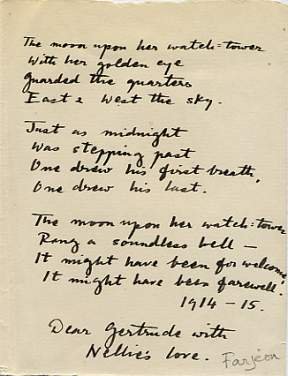 On July 19, 1915, at the age of 37, and hiding the diabetes that would have led to his rejection, he enlisted as a private in the British Army. He wrote a series of haunting, deathstruck poems during his training and then went to fight in France.  Edward Thomas was killed at Arras on Easter Monday, 1917. He had left his dugout for a moment to fill his pipe; a shell passed so close that the rush of air stopped his heart and he fell to the ground, not a mark on his body.

In Eleanor's book  Apple Orchard, the wandering minstrel Martin Pippin finds a lovelorn ploughman who begs him to visit the orchard where his beloved has been locked in the mill-house with six sworn virgins to guard her. Martin Pippin goes to the rescue and wins the confidence of the young women by telling them love stories. Although ostensibly a children's book, the six love stories have a depth which is adult in sentiment. Among the stories, themes include the apparent loss of a loved one, betrayal, and the yearning of a woman for whom it appears that love will never come.

Eleanor remained close to Edward’s wife, Helen. She later published much of their correspondence, and gave a definitive account of their relationship in Edward Thomas: The Last Four Years (1958).

Eleanor never married, but had a thirty-year friendship with George Earle, an English teacher. After his death in 1949, she had a long friendship with the actor Denys Blakelock, who wrote of it in the book, Eleanor, Portrait of a Farjeon (1966).

In 1951, she became a Roman Catholic.   Farjeon died in Hampstead, London on 5 June 1965. She is buried in the churchyard of St John-at-Hampstead. 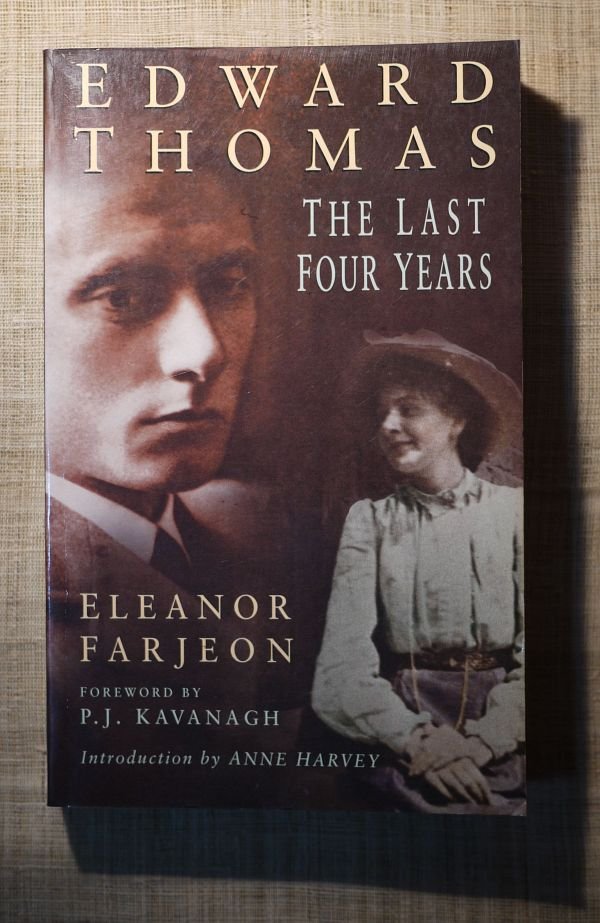