Epic of Gilgamesh, the 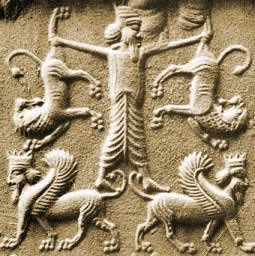 The Epic of Gilgamesh is a poem from Mesopotamia and amongst the earliest surviving works of literature.  It consists of a series of poems, and the story of Gilgamesh himself, in tablet form.

The earliest Sumerian poems are now generally considered to be distinct stories rather than parts of a single epic. They date from as early as the Third Dynasty of Ur (2150-2000 BC). The earliest Akkadian versions are dated to the early second millennium, most probably in the eighteenth or seventeenth century BC, when one or more authors drew upon existing literary material to create a single epic.  This first, "Old Babylonian" version of the epic is titled Shūtur eli sharrī ("Surpassing All Other Kings"). Only a few fragments of it survive. 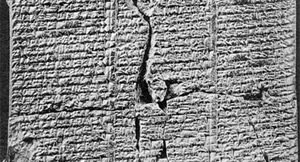 The later, Standard Babylonian version dates from the 13th to the tenth centuries BC and bears the title Sha naqba īmuru ("He who Saw the Deep"). Fragments of approximately two thirds of this longer, twelve-tablet version have been recovered. Some of the best copies were discovered in the library ruins of the 7th-century BC Assyrian king Ashurbanipal in Ninevah.  The standard version was discovered in the library of Ashurbanipal in Nineveh in 1849. It was written in standard Babylonian, a dialect of Akkadian that was used for literary purposes. 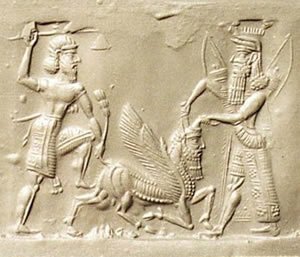 The standard version, and earlier version, have different opening words. The older version begins with the words "Surpassing all other kings", while the standard version has "He who saw the deep" (ša nagba īmuru).  In effect these myths are not dissimilar to the myths of Beowulf telling of ‘kings’ in the old sense of the word – that is shaman kings, who had the ability to go out of body and have visions – they gained their power by being ’gods’.  This is further reinforced by the content of the tablets.  For example, in Tablet 12, Gilgamesh sends Enkidu to retrieve some objects of his from the Underworld, and he returns in the form of a spirit to relate the nature of the Underworld to Gilgamesh.

The story is in some senses an allegorical tale about the battle of the Conscious Will based man with the primitive Subconscious.  Here the Subconscious is not made female, but is male, representing more primitive almost animal like desires and urges.  In the course of the Epic, the various functions of each part of this pairing is explored - sexual urges, and other autonomic urges like hunger.  There is also an allegorical exploration of the functions of Gilgamesh - representing the intellect. The story is told in the allegorical form of a spiritual path.

Many statues of him are shown with him holding a lion - showing he has suppressed the lion in him - see the symbolism of the Lion.

Tablet one
The story begins by introducing Gilgamesh, king of Uruk. Gilgamesh is oppressing his people, who are crying out to the gods for help. The gods respond to their pleas by creating an equal to Gilgamesh in order to distract him. They create a primitive man, Enkidu, who is covered in hair and lives in the wild with the animals. He is spotted by a trapper, who tells Gilgamesh of the man, and it is arranged for Enkidu to be seduced by Shamhat, a temple prostitute and after seven days of making love with him, she proposes to take him back to Uruk. Gilgamesh, meanwhile, has been having dreams that relate to the imminent arrival of a loved new companion.

Tablet two
Shamhat brings Enkidu to a shepherds' camp, where he is introduced to a human diet. Learning from a passing stranger about Gilgamesh's treatment of new brides, Enkidu is incensed and travels to Uruk to intervene at a wedding. When Gilgamesh attempts to visit the wedding chamber, Enkidu blocks his way, and they fight. After a fierce battle, Enkidu acknowledges Gilgamesh's superior strength [at that stage] and they become friends. Gilgamesh proposes a journey to the Cedar Forest to slay the monstrous  Humbaba.

Tablet three
The elders give Gilgamesh advice for his journey. Gilgamesh visits his mother, the goddess Ninsun, who seeks the support and protection of the sun-god Shamash for their adventure. Gilgamesh leaves instructions for the governance of Uruk in his absence.

Tablet four
Gilgamesh and Enkidu journey to the Forest. From this point we have considerable use of all the standard symbols of the spiritual path - mountains, thunder, bulls, thunderbirds, fire and so on.  Gilgamesh, for example, has five terrifying dreams about falling mountains, thunderstorms, wild bulls, and a thunderbird that breathes fire.

Tablet five
The heroes enter the cedar forest. Humbaba, the ogre-guardian of the Cedar Forest, insults and threatens them. In effect he is a demon.   He accuses Enkidu of betrayal, and vows to disembowel Gilgamesh and feed his flesh to the birds. Gilgamesh is afraid, but with some encouraging words from Enkidu the battle commences. The god Shamash sends 13 winds to bind Humbaba, and he is captured. The monster pleads for his life, and Gilgamesh at first pities him. Enkidu, however, is enraged and asks Gilgamesh to kill it. So Gilgamesh dispatches him with a blow to the neck. The two build a raft and return home along the river with a giant tree and the head of Humbaba.  Note here, that this is also a description of rebirth and beheading.

Tablet six
Gilgamesh rejects the advances of the goddess Ishtar. Ishtar asks her father Anu to send Gugalanna the Bull of Heaven to avenge her. When Anu rejects her complaints, Ishtar threatens to raise the dead who will "outnumber the living" and "devour them". Ishtar leads the bull of heaven to Uruk, and it causes widespread devastation. It lowers the level of the river, and dries up the marshes. It opens up huge pits that swallow 300 men. Without any divine assistance, Enkidu and Gilgamesh attack and slay it, and offer up its heart to Shamash. When Ishtar cries out, Enkidu hurls one of the hindquarters of the bull at her. The city of Uruk celebrates, but Enkidu has an ominous dream.

Tablet seven
In Enkidu's dream, the gods decide that one of the heroes must die because they killed  the Bull of Heaven. Despite the protestations of Shamash, Enkidu is marked for death. Enkidu, understandably, is none too pleased about this. Shamash tells him that Gilgamesh will bestow great honors upon him at his funeral, Enkidu regrets his curses and blesses Shamhat. In a dream however he sees himself being taken captive to the Underworld by a terrifying Angel of Death. The underworld is a "house of dust" and darkness whose inhabitants eat clay, and are clothed in bird feathers, supervised by terrifying beings. For 12 days, Enkidu's condition worsens. Finally, after a lament that he could not meet a heroic death in battle, he dies.

Tablet eight
Gilgamesh delivers a lamentation for Enkidu, in which he calls upon mountains, forests, fields, rivers, wild animals, and all of Uruk to mourn for his friend. Gilgamesh even tears at his hair and clothes in grief.  A great banquet is held where the treasures are offered to the gods of the Netherworld.  I quote "Just before a break in the text there is a suggestion that a river is being dammed".  This is a standard symbolic reference to the preparation for the kundalini experience.

Tablet nine opens with Gilgamesh roaming the wild clothed in animal skins, grieving for Enkidu. Fearful of his own death, he decides to seek Utnapishtim ("the Faraway"), and learn the secret of eternal life. Among the few survivors of the Great Flood, Utnapishtim and his wife are the only humans to have been granted immortality by the gods. After a long and perilous journey, Gilgamesh arrives at the twin peaks of Mount Mashu at the end of the earth. He comes across a tunnel,  guarded by two terrible scorpion-men. After questioning him, they allow him to enter it, and he passes under the mountains along the Road of the Sun. In complete darkness he follows the road for 12 "double hours". He arrives at the Garden of the gods, a paradise full of jewel-laden trees.

Tablet ten
Meeting Siduri, she sends him to Urshanabi the ferryman, who will help him cross the sea to Utnapishtim. Gilgamesh out of spontaneous rage destroys the stone-giants that live with Urshanabi. He tells him his story, but when he asks for his help Urshanabi informs him that he has just destroyed the only creatures who can cross the Waters of Death.  When they reach the island where Utnapishtim lives, Gilgamesh recounts his story. Utnapishtim reprimands him, declaring that fighting the common fate of humans is futile and diminishes life's joys.

Tablet eleven
Gilgamesh observes that Utnapishtim seems no different from himself, and asks him how he obtained his immortality. Utnapishtim explains that the gods decided to send a great flood. To save Utnapishtim the god Ea told him to build a boat. He gave him precise dimensions, and it was sealed with pitch and bitumen. His entire family went aboard, together with his craftsmen and "all the animals of the field". A violent storm then arose which caused the terrified gods to retreat to the heavens.  The storm lasted six days and nights, after which "all the human beings turned to clay". Utnapishtim weeps when he sees the destruction. His boat lodges on a mountain, and he releases a dove, a swallow, and a raven. When the raven fails to return, he opens the ark and frees its inhabitants. Utnapishtim offers a sacrifice to the gods, who smell the sweet savor and gather around.  When Enlil arrives, angry that there are survivors, she condemns him for instigating the flood. Ea also castigates him for sending a disproportionate punishment. Enlil blesses Utnapishtim and his wife, and rewards them with eternal life. This account matches the flood story that concludes the Epic of Atrahasis and of course that of Noah.

Utnapishtim challenges Gilgamesh to stay awake for six days and seven nights. Gilgamesh falls asleep, and Utnapishtim instructs his wife to bake a loaf of bread on each of the days he is asleep, so that he cannot deny his failure to keep awake. Gilgamesh, who is seeking to overcome death, cannot even conquer sleep! After instructing Urshanabi the ferryman to wash Gilgamesh, and clothe him in royal robes, they return back to Uruk.

Utnapishtim tells Gilgamesh that at the bottom of the sea there lives a plant that will make him young again. Gilgamesh, by binding stones to his feet so he can walk on the bottom, manages to obtain the plant but when Gilgamesh stops to bathe, it is stolen by a serpent. Gilgamesh weeps at the futility of his efforts, because he has now lost all chance of immortality. He returns to Uruk.

Tablet twelve
This tablet is mainly an Akkadian translation of an earlier Sumerian poem, Gilgamesh and the Netherworld. 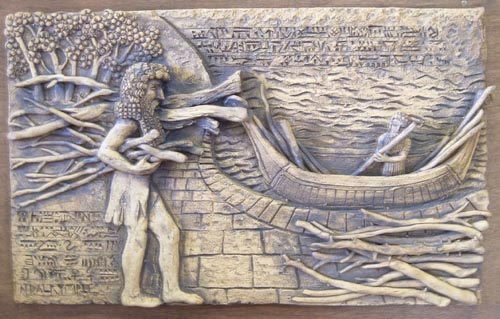