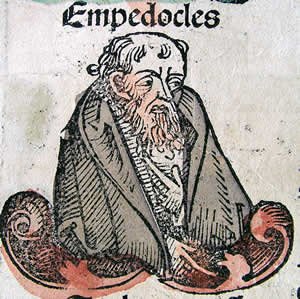 Empedocles ( c. 490–430 BC) is classified these days as a Greek pre-Socratic philosopher and a citizen of Agrigentum, a Greek city in Sicily, but as we shall see, this classification is not entirely accurate. Empedocles is better classified as a mystic.

What we know about him personally is somewhat vague. He came from a 'distinguished family' [meaning a family with spiritual roots]. Empedocles' father Meto seems to have been instrumental in overthrowing the 'tyrant of Agrigentum' in 470 BC. Empedocles continued this tradition by helping to overthrow the succeeding oligarchic government. He is said to have been 'magnanimous in his support of the poor'; severe in punishing the overbearing conduct of the oligarchs; but he declined the sovereignty of the city when it was offered to him. He was also described as a brilliant orator.

One intriguing ability he had, for which I have an observation, is that he was capable of curing diseases and 'averting epidemics' and he appeared to use music and spells to do so. So he was a magician and a healer. He was also capable of controlling the weather and was known as 'a controller of storms'.

“He himself, in his famous poem Purifications seems to have promised miraculous powers, including the destruction of evil, the curing of old age, and the controlling of wind and rain”.

Empedocles is considered the last Greek philosopher to write in verse and the surviving fragments of his teaching are from two poems, Purifications and On Nature.
“Empedocles surpassed both Xenophanes and Parmenides in the animation and richness of his style, and in the clearness of his descriptions”.
Some scholars believe that there was only one poem, and that the Purifications merely formed the beginning of On Nature. He is one of the last Greek philosophers to record their ideas in verse. We are lucky in that more of his work has survived than it has of many early Greek philosophers, whose 'fragments' allow only a tantalising glimpse of what they produced. 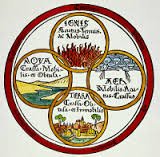 Philosophically, Empedocles was the first to explain the four elements [the levels and layers – Fire, Air, Water and Earth] to a Greek audience. As you should be able to see from the site observations, the levels and layers were widely known and used in the east within Hindu and Chinese cultures as well as numerous other shamanic cultures. Empedocles introduced the principle to the Greeks and the western world. 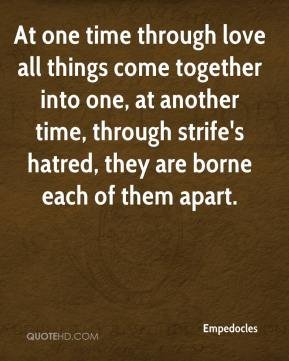 He also embraced the principle of contrast as the driver of creation. In this he recognised the two principle opposing powers or functions – Love and Hate – which he called Love and Strife. In effect it is contrast that enables creation to take place or “bring about the mixture and separation of the elements”.

Even more intriguing was his support for reincarnation. In this he was influenced by Pythagorus, but it is fruitful to wonder what his other sources were - as his philosophy is extraordinarily 'eastern' in flavour. To add a speculative note it is almost as if he could go out of body and meet the originators of the theories he adopted and explained – the thought is not that far fetched given his magic abilities.

“Timaeus and Dicaearchus spoke of the journey of Empedocles to the Peloponnese, and of the admiration which was paid to him there; others mentioned his stay at Athens, and in the newly founded colony of Thurii, 446 BC; there are also reports of him travelling far to the east to the lands of the Magi.”

For Empedocles, all living things were on the same spiritual plane, all had souls and their Higher spirits were linked in a chain. Subsequent commentators appear to have added their own two-pennurth to Empedocles views, by stating that an animal is a failed human reincarnated, but Empedocles appears not to have voiced such an opinion. In fact there is little evidence that he regarded anything as 'failed'. [Given that dogs are a darn sight more loyal and loving than human beings there is an argument for saying that human beings are failed dogs – sorry I'm joking – or maybe I'm not].

There are some tantalising hints that Empedocles understood the principles of aggregation in that he appears to describe how the combination of functions at the different levels and layers are used to make structures and thus aggregates which can then be given form. “ It is in the aggregation and segregation of elements thus arising, that Empedocles ... found the real process which corresponds to what is popularly termed growth, increase or decrease”. 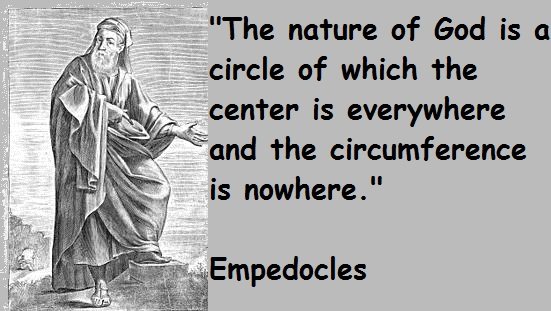 Empedocles also described the Egg , the following quote is not from him but attempts to describe his overall philosophy “there was a time when the pure elements and the two powers co-existed in a condition of rest and inertness in the form of a sphere [Egg ]. The elements [Levels and Layers] existed together in their purity, without mixture and separation, and the uniting power of Love predominated in the sphere: the separating power of Strife guarded the extreme edges of the sphere [Earth, Underworld, Hell]”.

A number of Empedocles explanations have been misconstrued by present day academics, simply because they cannot understand the very spiritual nature of what Empedocles was trying to explain. Empedocles described perception at a functional level. The functions and attributes of form based things are functionally perceived by us. Our whole body is functionally organised via the 5 senses and the nervous system to perceive what else exists in our environment. Empedocles called it 'respiration' meaning that the spirit or breath functionally 'flowed' between everything. 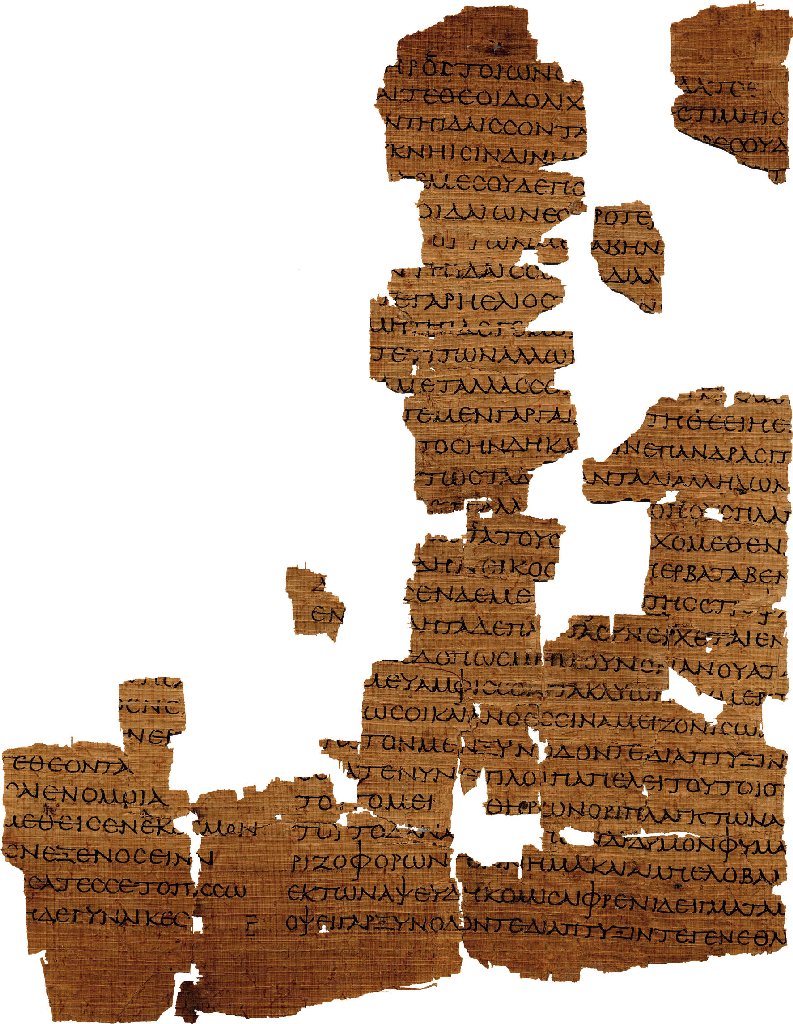 A piece of the Strasbourg Empedocles papyrus in
the Bibliothèque nationale et universitaire, Strasbourg

Perception is not merely a passive physical reflection of external objects, it is an active messaging system between functions [software not hardware]. Empedocles also noted the 'limitation and narrowness' of human perceptions.

“We see only a part, but fancy that we have grasped the whole. But the senses cannot lead to truth, to an understanding of Reality”.

Diogenes Laërtius records the legend that 'he died by throwing himself into an active volcano'. Needless to say this has been presumed by those who are of a materialistic bent, to be Mount Etna in Sicily. But volcanoes are symbolic – Empedocles was consumed by symbolic fire and thus became a 'god' – he achieved annihilation – lucky man.

To the elements it came from
Everything will return.
Our bodies to earth,
Our blood to water,
Heat to fire,
Breath to air.