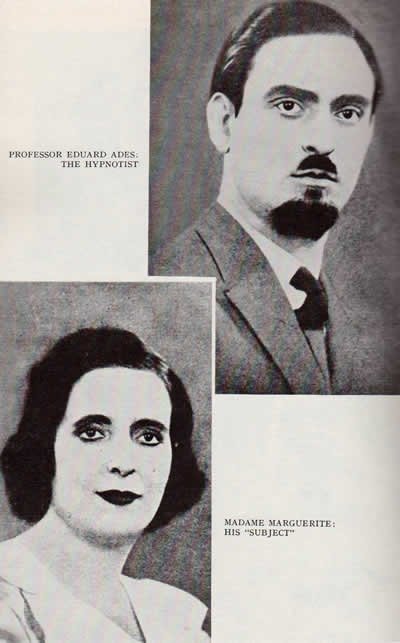 The French are quite prominent in this quarter [of Cairo] and this young couple had lived in Egypt for many years. The husband's name was Monsieur Eduard Ades and his wife was known as Madame Marguerite. He was gifted with some amount of hypnotic power, she being an exceptionally fine subject for his experiments. After some years of practice and training, they had arrived at a certain degree of competence in their power of demonstrating the extraordinary possibilities which lie untapped within the minds and bodies of mankind. I tested them in various ways and, though most of our experiments were quite unsensational and of interest to scientific researchers alone, nevertheless there were two or three feats of a character sufficient to startle any hide-bound materialist who has never explored such possibilities.....even when I invited the slightly sceptical wife of a prominent British official to witness one test, she was compelled to confess that it seemed a perfectly genuine demonstration, and that no theory of trickery could explain it.

Monsieur Ades was a handsome man in the early thirties.  His head was covered with a thick mass of wavy hair, his forehead was high and intellectual , the eyes were steady and penetrating, the nose was Greek in its straightness; while he spoke in the animated manner of his race. Unusually eloquent, he could keep up a torrent of conversation for hours, with the words tumbling over each other in their hurry to escape from his mouth. His entire personality conveyed an impression of
force and strength.
Madame Marguerite, on the other hand, was all that one might expect a good hypnotic subject to be. She was gentle, sensitive, quiet, reserved and wistful. Her body was short and slightly plump, the eyes being noticeably large, soft and dreamy.
She moved with slow, lethargic movements.

Now read on - the observations.