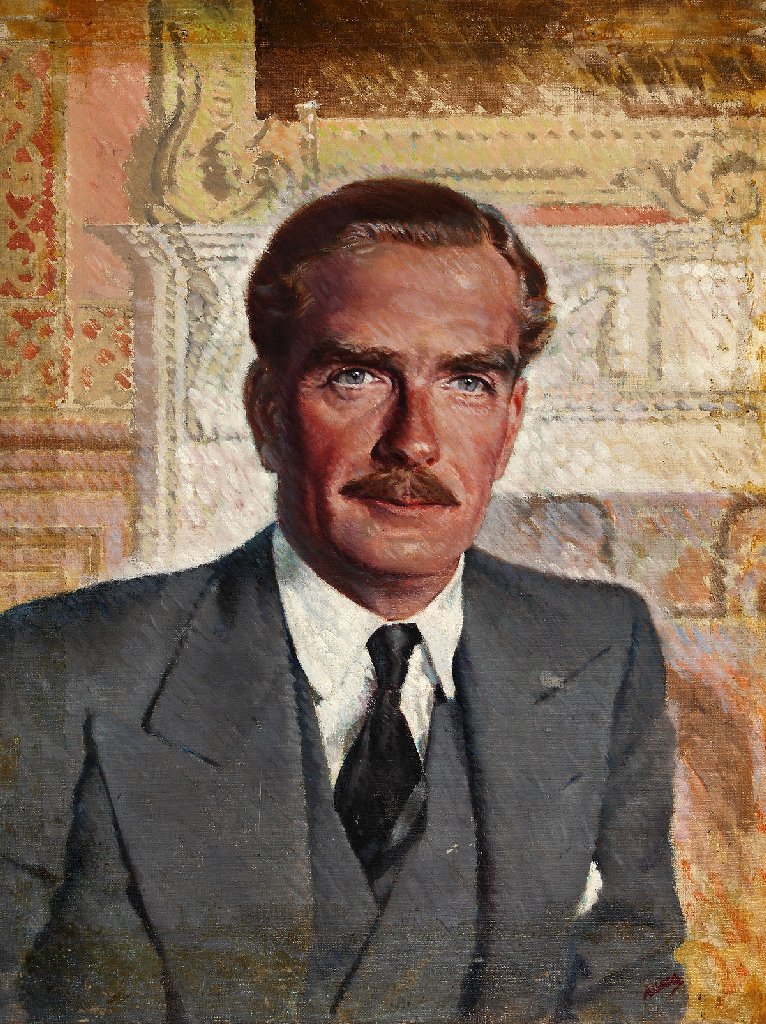 Robert Anthony Eden, 1st Earl of Avon, KG, MC, PC (12 June 1897 – 14 January 1977) was a British Conservative politician who served three periods as Foreign Secretary and then a relatively brief term as Prime Minister of the United Kingdom from 1955 to 1957.

Achieving rapid promotion as a young Member of Parliament, he became Foreign Secretary aged 38, before resigning in protest at Neville Chamberlain's appeasement policy towards Mussolini's Italy.

He again held that position for most of the Second World War, and a third time in the early 1950s.

Having been deputy to Winston Churchill for almost 15 years, he succeeded him as the Leader of the Conservative Party and Prime Minister in April 1955, and a month later won a general election.

Eden's worldwide reputation as an opponent of appeasement, but also as a "man of peace" and a skilled diplomat, was overshadowed in 1956 when the United States refused to support the Anglo-French military response to the Suez Crisis, an action which was not without its own motives, as it resulted in the end of British predominance in the Middle East.

Two months after ordering an end to the Suez operation, he resigned as Prime Minister on the grounds of ill health.  This apparent failure left a permanent cloud over his reputation as a leader.  Biographer D. R. Thorpe described the Suez Crisis as "a truly tragic end to his premiership, and one that came to assume a disproportionate importance in any assessment of his career."

But there is more to this than a tragic political mistake, because Anthony Eden was yet another victim of his doctors.  In the end, he was the equivalent of a drug addict – all as a consequence of medical blunders and prescription medicine.

Anthony Eden and Queen Elizabeth before the Suez Crisis in 1956 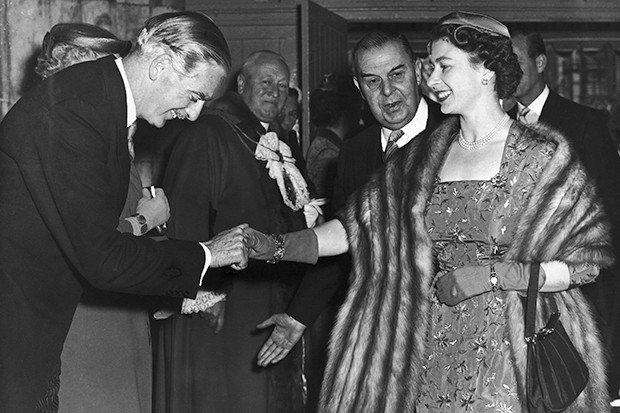 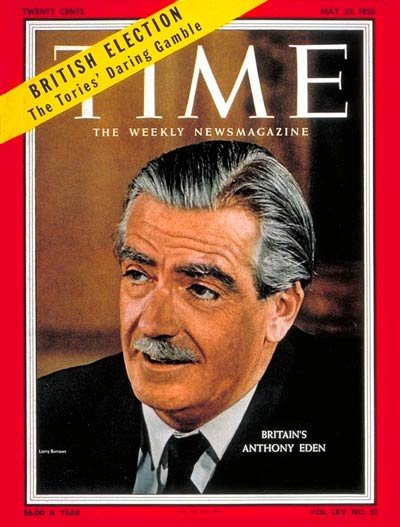 The reasons behind Sir Anthony Eden's mistake in dispatching British troops to Suez are among the most enduring mysteries of modern politics.

Rumours have circulated for decades that Eden, who was Prime Minister from 1955 to 1957 and was suffering from a debilitating illness at the height of the crisis in 1956, was taking addictive, painkilling drugs that could have clouded his judgement.

Private papers just uncovered in the Eden family archives provide a definitive answer, disclosing that he had been prescribed a powerful combination of amphetamines and barbiturates called drinamyl.

Better known in post-war Britain as "purple hearts", they can impair judgement, cause paranoia and even make the person taking them lose contact with reality. Drinamyl was banned in 1978.

The document was obtained by David Owen, the former foreign secretary, as he researched a book on the effects of ill-health on key moments in history. Written by Eden's physician, the document confirms the Tory prime minister had been prescribed drinamyl…… 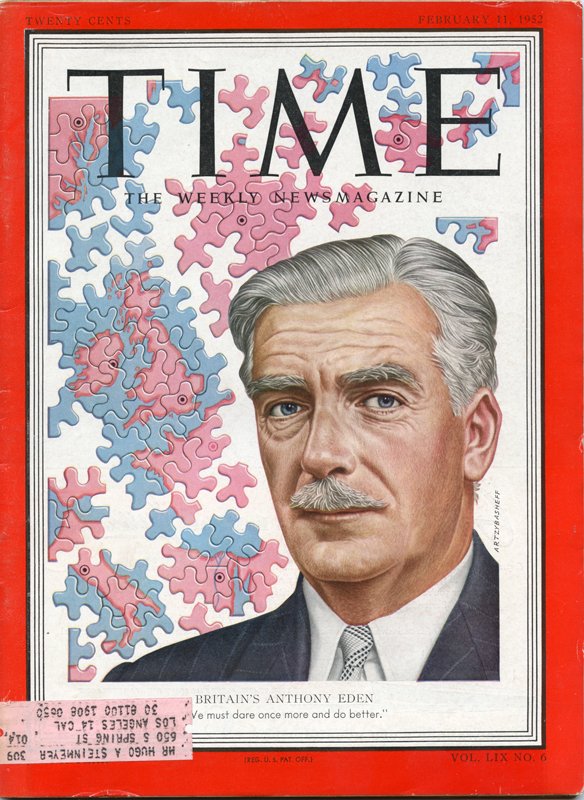 "There have been rumours and suppositions that Eden had been taking these drugs over many years," Lord Owen told the GMTV Sunday Programme. "But no one has been able ever to prove it and some have denied he was even taking these drugs. Everybody knows that when you are taking these drugs and are having a down period or difficulty, it's extremely frequent for patients to up the dose themselves and not tell those closest to them or even their doctors."

The mistake led to years of cholangitis, an abdominal infection which became so agonising three years later that he was admitted to hospital with his temperature reaching 106F.

By this time he had succeeded Sir Winston Churchill and the Suez crisis was coming to a head after the canal was seized by President Nasser of Egypt.

While taking the painkillers, Eden, who was widely believed to be obsessed with the threat from Nasser, secretly formulated a plan with French officials under which Israel would invade Egypt, allowing British and French forces to intervene and seize the canal.

The scheme backfired spectacularly. The military action split the Cabinet, divided public opinion, undermined the economy and was condemned by world leaders, including US President Dwight Eisenhower.

A humiliated Eden was forced to declare a ceasefire and, with his health continuing to decline, he resigned as Prime Minister in the following January.

The Suez debacle, judged by many as marking the end for Britain as a major power in the world, has ever since haunted politicians who saw how it wrecked Eden's reputation.

Lord Owen, who qualified as a doctor before pursuing his political career, said: "Eden would not have contemplated such an action if he had been fit and well." 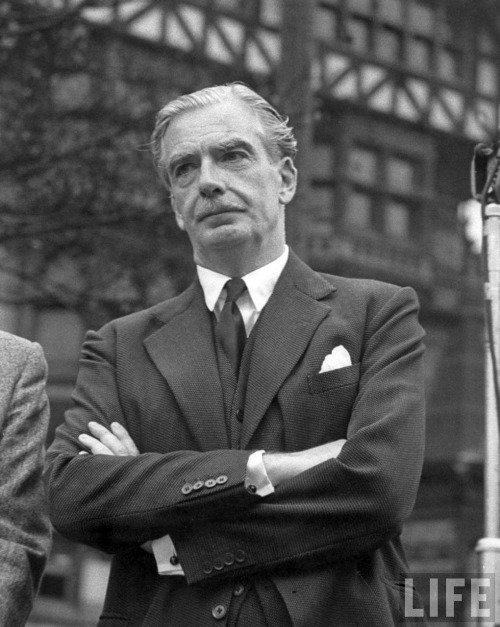 Eden also had an ulcer, and had had an appendicectomy, a sure sign that something – a pathogen of some sort had been on the rampage for some time, but had never been investigated.  In other words, he had hardly ever been a well man and the doctors simply made his life more painful.  The  cholangitis became so agonising that he required major surgery on three or four occasions to alleviate the symptoms.  There was, of course, no attempt to find the cause.

It was thus not Eden who precipitated the political crises, just as it may not even have been Hitler who was responsible for the campaign of aggression that led to WWII, it was their doctors [see the Hitler entry for the incredible mis-prescription being perpetrated on him].

Few take into account the number of other deaths that may be attributable to doctor mis-prescription, malpractice, pharmaceutical company fraud, and so on, of political leaders.  Tony Blair was on doctor prescribed pharms for heart arrhythmia when he went to War with Iraq.  Wars have been fought and political decisions have been made that have caused the death of millions over the years, as a consequence of doctors and their symptom based approach to medicine.

Amphetamines and barbiturates are addictive.  The resignation document written by Eden for release to the Cabinet on 9 January 1957 admitted his dependence on stimulants "... I have been obliged to increase the drugs [taken after the "bad abdominal operations"] considerably and also increase the stimulants necessary to counteract the drugs," he wrote.  Needless to say he would not himself have either admitted or even be aware of the mental effects, people on drugs never are, they think they are perfectly OK, omnipotent even, until the hallucinations become even more frightening and the voices in their head more insistent and evil.

In December 1976, Eden traveled with his wife to the United States to spend Christmas and New Year with Averell and Pamela Harriman, but after reaching the States his health rapidly deteriorated. Prime Minister James Callaghan arranged for an RAF plane that was already in America to divert to Miami, to fly Eden home.  Eden died from liver cancer in Salisbury on 14 January 1977, aged 79.   So the pathogens that caused all the rest of his ills eventually gave him cancer. 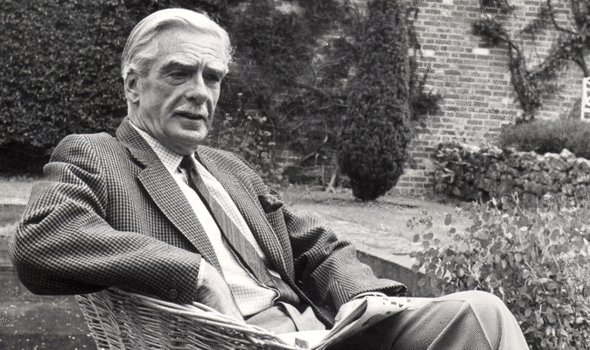