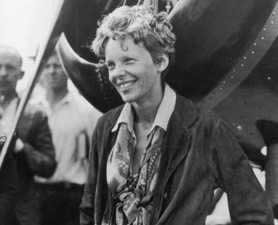 She wrote best-selling books about her flying experiences and was instrumental in the formation of The Ninety-Nines, an organization for female pilots. Earhart joined the faculty of the Purdue University aviation department in 1935  to counsel women on careers and help inspire others with her love for aviation. She was also a member of the National Woman's Party, and an early supporter of the Equal Rights Amendment.   She did marry, but love was clearly not a driver in her life and they had no children.    Furthermore she kept her own name rather than being referred to as Mrs. Putnam.

No, her love was flying and her writing bears testimony to an almost mystical love of the air, a search for transcendence through flight.  There is something very strange when you read her poetry, for example she literally flew like a bird in the heavens, but it seems the symbolic associations were unconsciously also present.  She seemed always to want to go higher – literally and figuratively.  She is an almost allegorical hero on a spiritual path.

She set numerous world records in flying.   On October 22, 1922, Earhart flew the Airster to an altitude of 14,000 feet , setting a world record for female pilots.  In August 1928, Earhart became the first woman to fly solo across the North American continent and back.   In 1931, flying a Pitcairn PCA-2 autogyro, she set a world altitude record of 18,415 feet.

At the age of 34, on the morning of May 20, 1932, Earhart set off from Harbour Grace, Newfoundland with the intention of flying to Paris in her single engine Lockheed Vega 5B.  After a flight lasting 14 hours, 56 minutes during which she contended with strong northerly winds, icy conditions and mechanical problems, Earhart landed in a pasture at Culmore, north of Derry, Northern Ireland.

On January 11, 1935, Earhart became the first person to fly solo from Honolulu, Hawaii to Oakland, California.  The next record  was a nonstop flight from Mexico City to New York.

Early in 1936, Earhart started to plan a round-the-world flight. Not the first to circle the globe, it would be the longest at 29,000 miles, following a grueling equatorial route.

On her second attempt, Fred Noonan was Earhart's only crew member. The pair departed Miami on June 1 and after numerous stops in South America, Africa, the Indian subcontinent and Southeast Asia, arrived at Lae, New Guinea, on June 29, 1937. At this stage about 22,000 miles of the journey had been completed. The remaining 7,000 miles would all be over the Pacific.

The last leg was never completed.  Earhart disappeared over the central Pacific Ocean near Howland Island.

The official search efforts lasted until July 19, 1937.  At $4 million, the air and sea search by the Navy and Coast Guard was the most costly and intensive in U.S. history  Despite this unprecedented search by the United States Navy and Coast Guard, no physical evidence of Earhart, Noonan or the Electra 10E was found. The United States Navy aircraft carrier Lexington and battleship Colorado, the Itasca (and even two Japanese ships, the oceanographic survey vessel Koshu and auxiliary seaplane tender Kamoi) searched for six–seven days each, covering 150,000 square miles .

There does not need to be a reason for a hero's journey, but it is worth mentioning that she achieved all this despite suffering for most of her brief life from very painful sinusitis contracted during the 1918 Spanish flu pandemic.  The sinusitis gave her chronic headaches, pain and pressure around one eye and copious mucus drainage via the nostrils and throat.  Chronic sinusitis was to significantly affect Earhart's flying, and sometimes, even when flying she was forced to use a small drainage tube which she covered using a bandage on her cheek.

So considerable courage.  A real hero.

Her courage and goal-oriented career along with the circumstances of her disappearance at a comparatively early age have driven her lasting fame in popular culture.

Fascination with her life, career and disappearance continues to this day. 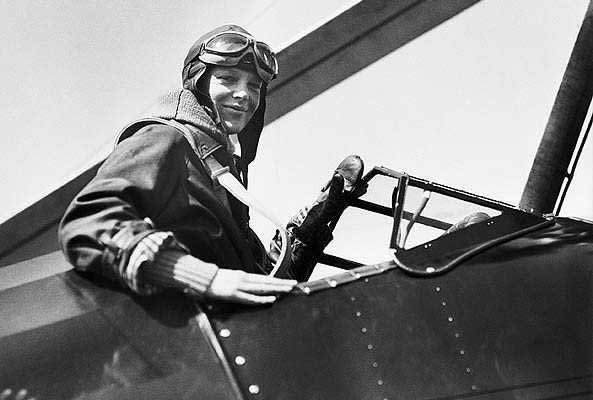