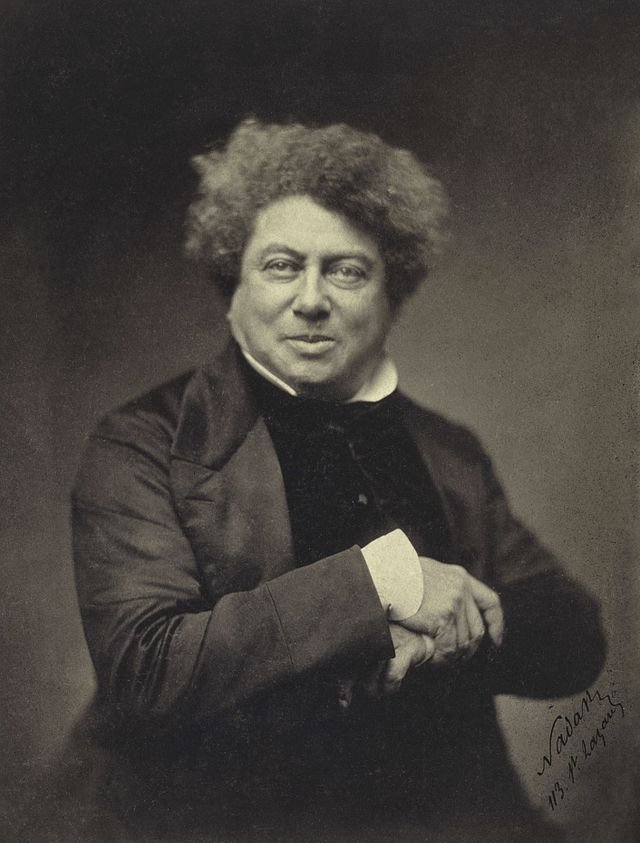 His works have been translated into nearly 100 languages, and he is one of the most widely read French authors.

Many of his historical novels of high adventure were originally published as serials, including The Count of Monte Cristo, The Three Musketeers, Twenty Years After, and The Vicomte de Bragelonne: Ten Years Later.

His novels have been adapted since the early twentieth century for nearly 200 films. Dumas' last novel, The Knight of Sainte-Hermine, unfinished at his death, was completed by a scholar and published in 2005, becoming a bestseller. It was published in English in 2008 as The Last Cavalier.

Prolific in several genres, Dumas began his career by writing plays, which were successfully produced from the first. He also wrote numerous magazine articles and travel books; his published works totaled 100,000 pages. In the 1840s, Dumas founded the Théâtre Historique in Paris.

Dumas' father (general Thomas-Alexandre Davy de la Pailleterie) was born in Saint-Domingue (present-day Haiti) to a French nobleman and an enslaved African woman. At age 14, Thomas-Alexandre was taken by his father to France, where he was educated in a military academy and entered the military for what he made as an illustrious career.

His father's aristocratic rank helped young Alexandre acquire work with Louis-Philippe, Duke of Orléans. He later began working as a writer, finding early success. Decades later, in the election of Louis-Napoléon Bonaparte in 1851, Dumas fell from favour, and left France for Belgium, where he stayed for several years. Upon leaving Belgium, Dumas moved to Russia for a few years, before going to Italy. In 1861 he founded and published the newspaper, L' Indipendente, which supported the Italian unification effort. In 1864 he returned to Paris.

Though married, in the tradition of Frenchmen of higher social class, Dumas had numerous affairs (allegedly as many as forty). He was known to have at least four illegitimate or "natural" children, including a boy named Alexandre Dumas after him. This son became a successful novelist and playwright, and was known as Alexandre Dumas, fils (son), while the elder Dumas became conventionally known in French as Alexandre Dumas, père (father). 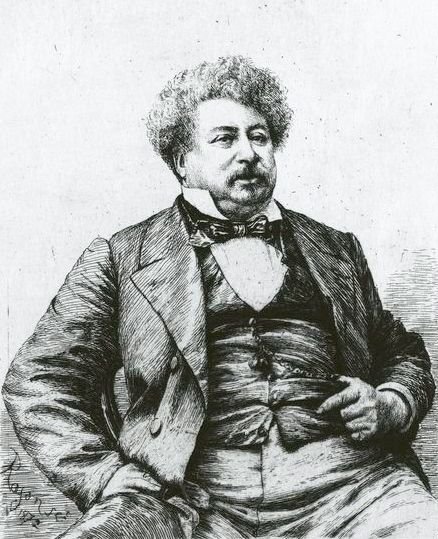 The English playwright Watts Phillips, who knew Dumas in his later life, described him as,

"the most generous, large-hearted being in the world. He also was the most delightfully amusing and egotistical creature on the face of the earth. His tongue was like a windmill – once set in motion, you never knew when he would stop, especially if the theme was himself."

Brought as a boy to France by his father, Thomas-Alexandre Dumas Davy [Dumas’s father] was educated in a military school and joined the army as a young man. As an adult, Thomas-Alexandre used his mother's name, Dumas, as his surname after a break with his father. Dumas was promoted to general by the age of 31, the first soldier of Afro-Antilles origin to reach that rank in the French army. He served with distinction in the French Revolutionary Wars. He became general-in-chief of the Army of the Pyrenees, the first man of colour to reach that rank. Although a general under Bonaparte in the Italian and Egyptian campaigns, Dumas had fallen out of favour by 1800 and requested leave to return to France. On his return, his ship had to put in at Taranto, in the Kingdom of Naples, where he and others were held as prisoners of war. During his two-year imprisonment, his health was ruined. At the time of Alexandre's birth, his father was impoverished.

His father died of cancer in 1806 when Alexandre was four. And it is from his death that we have an observation.