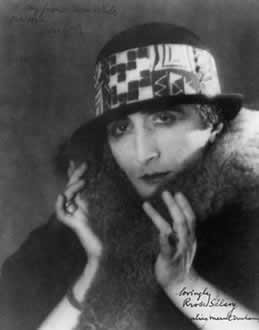 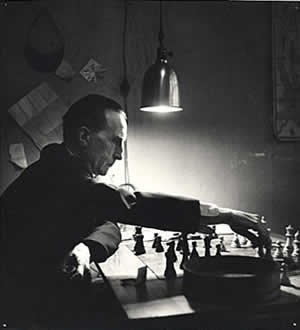 Marcel Duchamp (1887 –1968;) was a French artist whose work  is provocative, misunderstood, deeply symbolic and spiritually inspired.   "Rrose Sélavy", [see above left] also spelled Rose Sélavy, was one of Duchamp's pseudonyms. The name, sounds like the French phrase "Rose, c'est la vie", - a sort of Rosicrucean phrase, don't you think?... With just a touch of androgyny.

Duchamp challenged conventional thought about artistic processes and art marketing, not so much by writing, but through 'subversive actions', but they are not the subversive actions often described by art critics. He famously dubbed a urinal art and named it Fountain – but look at the object itself and understand the symbolism and it is not a subversive act.  I have provided it as an observation so you can see the symbolism employed.

His aim was to try to help us see art in everything – to realise that our classification of a thing as 'art' or 'not art' was arbitrary and damaging.  If this separation is made, the implication is that we fill our lives full of 'no art' and trot along to a museum every so often to see 'art'.  Art according to Duchamp should be present in everything.

The objects he used to get his point over included a bottle drying rack, a snow shovel, and the famous urinal.    At an exhibition of aviation technology  Duchamp said to his friend Constantin Brâncusi, "Painting is washed up. Who will ever do anything better than that propeller? "

Marcel Duchamp was born in the Upper Normandy region of France, and grew up in a family that enjoyed cultural activities. The art of painter and engraver Emile Nicolle, his maternal grandfather, filled the house, and the family liked to play chess, read books, paint, and make music together.  Of Eugene and Lucie Duchamp's seven children, four became successful artists. At school his best subject was mathematics.  In effect he was genetically predisposed to be spiritually inclined.

He experimented with all sorts of styles and techniques in his early years, but when asked about what had influenced him the most, Duchamp cited the work of Symbolist painter Odilon Redon.   Many of the drawings use visual and/or verbal puns. He was intrigued with the concept of depicting a "Fourth dimension" in art.

Duchamp gave a "loose" translation of L.H.O.O.Q. -  his Mona Lisa painting - as "there is fire down below" .  More symbolism, this time partly inspired by sexual stimulation as a technique.  According to Rhonda Roland Shearer, the apparent Mona Lisa reproduction is in fact a copy modeled partly on Duchamp's own face.   Bride (1912), Chocolate Grinder (1914) and Glider are related symbolically.

Duchamp read Max Stirner's philosophical tract, The Ego and Its Own, the study of which he considered another turning point in his artistic and intellectual development. He called it "...a remarkable book ... which advances no formal theories, but just keeps saying that the ego is always in everything.".  Squash the big I am.

Towards the end of 1912, he traveled with Apollinaire and Gabrielle Buffet-Picabia through the Jura mountains. Duchamp's notes from the trip avoid logic and sense.  Suppress reason.

In 1913, Duchamp withdrew from painting circles and began working as a librarian where he studied the work of  Henri Poincaré . Poincaré said "things themselves are not what science can reach..., only the relations between things. Outside of these relations there is no knowable reality".  We do not know Reality.

Duchamp produced one of his favorite pieces, 3 Standard Stoppages (3 stoppages étalon), not long after.  It incorporates the symbolism of Threads and cords, it follows  Poincaré's School of the Thread.

After World War I was declared in 1914,  Duchamp decided to emigrate to the United States.   When he arrived in New York,  he quickly befriended  Man Ray.  Duchamp created the Société Anonyme in 1920, along with Katherine Dreier and Man Ray.

In 1920, with help from Man Ray, Duchamp built a motorized sculpture, Rotative plaques verre, optique de précision ("Rotary Glass Plates, Precision Optics"). The piece used a motor to spin pieces of rectangular glass on which were painted segments of a circle. When the apparatus spins, an optical illusion occurs, in which the segments appear to be closed concentric circles.  Or the Egg and spheres if you prefer. 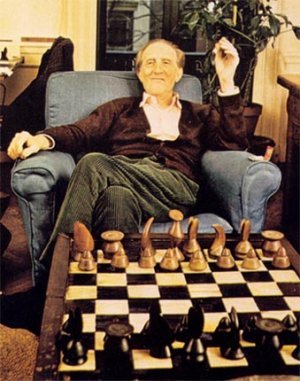 Duchamp also had a passion for chess.  He observed, "I am ... a victim of chess. It has all the beauty of art—and much more. It cannot be commercialized. Chess is much purer than art in its social position.......The chess pieces are the block alphabet which shapes thoughts; and these thoughts, although making a visual design on the chess-board, express their beauty abstractly, like a poem. ... I have come to the personal conclusion that while all artists are not chess players, all chess players are artists."

The theme of the "endgame" is important to an understanding of Duchamp's complex attitude towards his artistic career.

'All black can hope for is a draw'.

Duchamp left a legacy to chess in the form of an enigmatic endgame problem he composed in 1943. The problem was included in the announcement for Julian Levi's gallery exhibition "Through the Big End of the Opera Glass", printed on translucent paper with the faint inscription: "White to play and win". Grandmasters and endgame specialists have since grappled with the problem, with most concluding that there is no solution.

What was his inspiration? He was French.  It was love, making love, romance, passion.  He had a mistress, but he had no wife!

For nearly three decades, Mary Reynolds and Duchamp enjoyed a union that was "thought by their friends to be happier than most marriages." From the late 1920s on, Duchamp had two addresses in Paris: his own small apartment on rue Larrey and Reynolds's house on rue Hallé.

Reynolds and Duchamp initially met in New York when both were living in Greenwich Village. They renewed their acquaintance in Paris in 1923, spending considerable time socializing at the Boeuf sur le Toit and other cafés while their involvement deepened. The relationship did not run smoothly, however, for Reynolds. Duchamp cherished his freedom and “his unconventional, even shocking, life”. He insisted that their relationship be kept secret. If they ran into each other in public, Reynolds was not to acknowledge him. Duchamp continued to see others and expected her to do the same (she did not). This created tremendous conflict for her, that took its toll.

Reynolds began to drink excessively.  She finally confirmed in 1924 to writer and critic Henri-Pierre Roché, one of Duchamp's most intimate friends, that Duchamp was, indeed, her lover, but lamented his lack of fidelity and continued attraction to "very common women."

She suspected Duchamp was "incapable of loving" and unable to commit to one person. But Beatrice Wood captured Duchamp's character most closely when she stated, "Everybody loves him. He belongs to everybody and to nobody."

Though Duchamp remained an enigma to most, he and Reynolds seem to have found their common ground after Duchamp's short-lived marriage to Lydie Sarazin-Levassor in 1927.

Duchamp finally relented and allowed their relationship to become public. He later described it as "a true liaison, over many, many years, and very agreeable"; although he did qualify it by remarking that they "weren't glued together, in the 'married' sense of the word."

Although they never married, from 1928 until the Nazi occupation of Paris separated them, Reynolds and Duchamp were seen together, lived together, vacationed together.

Marcel Duchamp died on 2 October 1968 in Neuilly-sur-Seine, France, and is buried in the Rouen Cemetery, in Rouen, France. His grave bears the epitaph, "D'ailleurs, c'est toujours les autres qui meurent;" or "Besides, it's always the others who die".

In 2004, as a testimony to the legacy of Duchamp's work to the art world, his Fountain was voted "the most influential artwork of the 20th century" by a panel of prominent artists and art historians.

Oh yes, one more thing.  He was left handed.