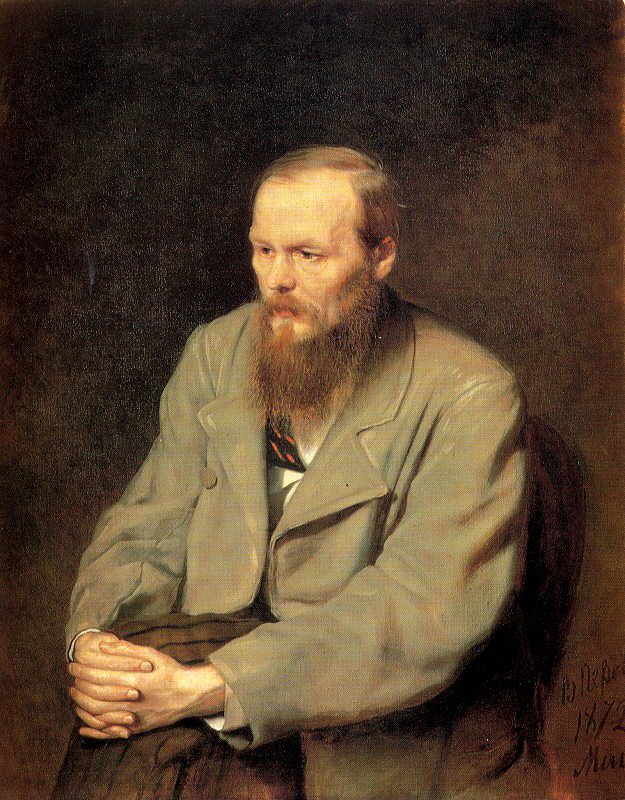 Portrait of Dostoyevsky in 1872

Although Dostoyevsky began writing in the mid-1840s, his most memorable works – including Crime and Punishment, The Idiot and The Brothers Karamazov – are from his later years. Altogether he wrote eleven novels, three novellas, seventeen short novels, and three essays, and has been judged by many literary critics to be one of the greatest and most prominent writers in world literature.

His life was to say the least extremely hard.  Adding to his woes, he suffered from epilepsy.

He was raised in relatively affluent circumstances.  His father, a doctor, was well off and they had both a town home in Moscow and a small estate in the country near Darovoye, a town about 150 km (100 miles) from Moscow.  He had a nanny, Alina Frolovna, and she and a family friend, the serf and farmer Marei from Darovoye, were influential figures in his childhood.  Marei, in particular, helped him deal with his hallucinations.  He was epileptic throughout his life. 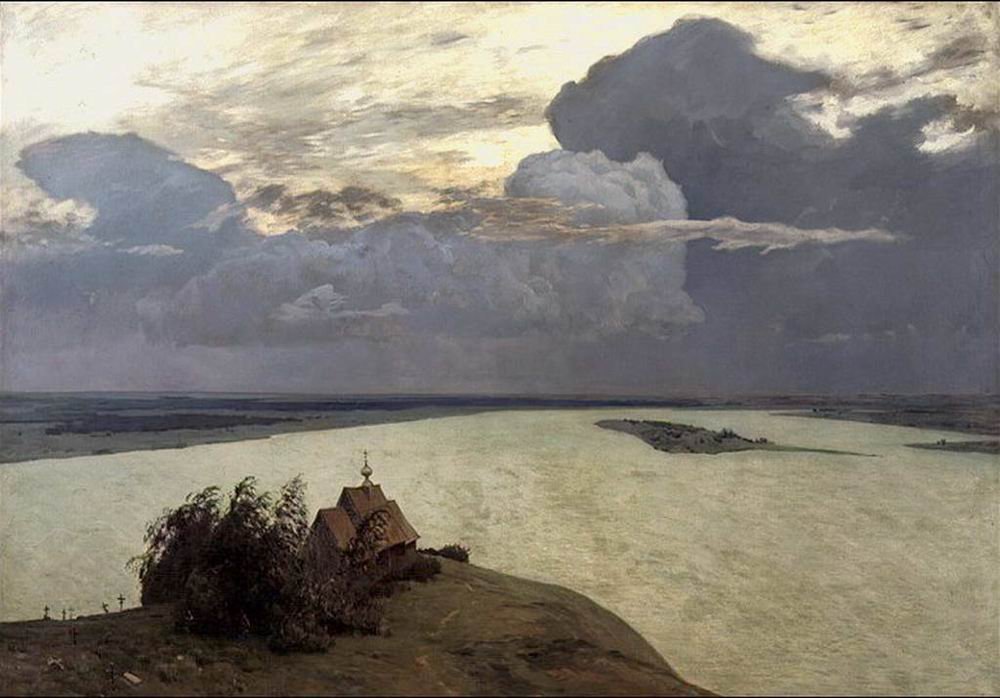 He appears to have been a very sensitive child.  At school he was described as a “pale, introverted dreamer and an over-excitable romantic”.  Dostoyevsky would often talk with his father’s patients, and he once encountered a nine-year-old girl who had been raped, an event that traumatised him.  In later life he became something of  a loner:

he had a strong sense of justice, protected newcomers, aligned himself with teachers, criticised corruption and helped poor farmers. Although he lived in his own literary world, his classmates respected him. His reclusive way of life and his interest in religion earned him the nickname Monk Photius.

His mother's sudden death in 1837, when he was in his early teens, devastated him.

In 1849 he was arrested for his involvement with the Petrashevsky Circle. The future of the convicts was discussed for four months by an investigative commission headed by the Tsar which included the head of the secret police. They decided to execute the convicts. On 23 December 1849, the members of the circle were brought to Semyonov Place in St Petersburg. At the last minute, the execution was stayed by the intervention of the Tsar.  Dostoyevsky's sentence was commuted to four years of exile with hard labour at a katorga prison camp in Omsk, Siberia, followed by a term of compulsory military service.

In summer, intolerable closeness; in winter, unendurable cold. All the floors were rotten. Filth on the floors an inch thick; one could slip and fall ... We were packed like herrings in a barrel ... There was no room to turn around. From dusk to dawn it was impossible not to behave like pigs ... Fleas, lice, and black beetles by the bushel ...
—Fyodor Dostoyevsky, Pisma, I: pp. 135–7.

Above:  Camp in Omsk, Siberia

Classified as "one of the most dangerous convicts", Dostoyevsky had his feet and hands permanently chained until his release.  The House of the Dead was based on his experience in prison.

After his release, Dostoyevsky was forced to serve as a soldier, but was discharged from the military due to his ill health.  He also developed a gambling addiction, which led to financial hardship and several embarrassing periods when he had to beg for money.

He had a succession of relationships and marriages.  He had his first known affair with Avdotya Yakovlevna, the wife of Panayev. Dostoyevsky later admitted that he "fell hopelessly in love with Panayeva, I'm over it now, but I'm not sure".  Another short but intimate affair was with Polina Suslova, Suslova's infidelity with a Spaniard and Dostoyevsky's gambling addiction resulted in the end of that relationship. During all of this he was married.  His first wife, Maria Dostoyevskaya, née Isayevna, died of tuberculosis. Their family life had been unhappy and she had found it difficult to cope with his seizures.

Because of her strange, suspicious and fantastic character, we were definitely not happy together, but we could not stop loving each other; and the more unhappy we were, the more attached to each other we became. 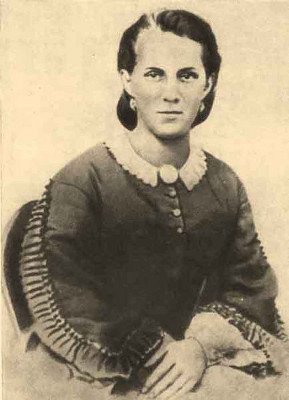 In 1865, Dostoyevsky met and had a relationship with Anna Korvin-Krukovskaya.

Around 1866, Dostoyevsky fell in love with the stenographer Anna Snitkina, a

...very young and rather nice looking twenty-year-old woman with a kind heart... I noticed that my stenographer loved me sincerely, though she never told me about it. I also liked her more and more". He later "proposed to her and... got married".

Anna Snitkina described him in 1866:

I was struck by his eyes, they were different: one was dark brown; in the other, the pupil was so big that you could not see its colour. The strangeness of his eyes gave Dostoyevsky some mysterious appearance. His face was pale, and it looked unhealthy...

Pupil size of this sort can be an indication of brain injury. 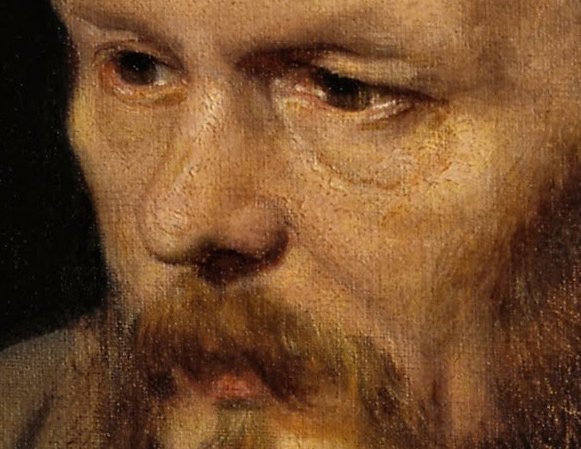 His first child, Sonya born on 5 March 1868 died three months later from pneumonia.  According to Anna, Dostoyevsky was cured of his gambling addiction after the birth of their second daughter.  Whatever caused his seizures it appears to have been hereditary; his son had an extreme epileptic seizure and died.

His first novels gained many sales and critical acclaim, but after his second novel received negative reviews, Dostoyevsky's health declined and he suffered more epileptic seizures, thus there seems to be a link between the worsening of his condition and high levels of negative emotion.  He suffered enough emotional upsets from fear, grief, deprivation, terror, and so on to last him a lifetime, but if this was not enough, he does seem to have suffered greatly from the critical attacks levelled at him by others.  He ignored the praise he received and seems to have taken to heart the vitriol from the few. 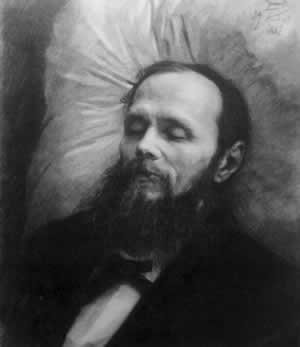 Dostoevsky on his death bed
"He looked as though he were asleep, gently smiling,
as though he could see something beautiful"
– Lyubov Dostoyevskaya

In later years, Dostoevsky suffered not only from epileptic seizures, but had trouble breathing.  In March 1877 alone, he had four epileptic seizures. In early August 1879, he was diagnosed as having early-stage pulmonary emphysema.  In January 1881 Dostoyevksy suffered a  pulmonary haemorrhage.  Following another haemorrhage Anna called the doctors, who gave a grim prognosis. A third haemorrhage followed.  He died shortly afterwards.

Despite all this – or maybe because of it - he eventually became one of the most widely read and renowned Russian writers. His books have been translated into more than 170 languages and have sold around 15 million copies.

Verily, verily, I say unto you, Except a corn of wheat fall into the ground and die, it abideth alone: but if it die, it bringeth forth much fruit.

Some of the pictures on this page have been selected for their beauty rather than their relevance to the text.