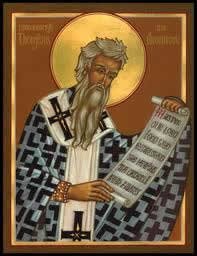 There is some argument about whether the writings attributed to Dionysius the Areopagite were actually written by him, some people now attribute the two texts below to  "Pseudo-Dionysius the Areopagite”.  The two texts were discovered in the early 6th century, as such if they date from this era they were clearly written long after St Paul’s Athenian convert was alive.

The two texts  employ Neoplatonic language to elucidate Christian theological and mystical ideas. One deals with [as its title suggests] a Mystical theology, the second deals with the Angelic hierarchy.

In Studies of Mystical Religion by Professor Rufus Jones, it is postulated that the writer of the texts was either a pupil of Proclus or, as is more probable, of Damascus, the second in succession from Proclus and one of the last teachers of the Athenian school.  It was natural that when this person became a Christian writer, he should assume a name which had sacred memories of Athenian faith and which was also a link with Greek culture.

Whatever the truth, this  ‘Dionysius’ - an anonymous, mysterious monastic man- taught the foremost Christians for 10 centuries both in the East and the West, for nearly every medieval scholar made us of his writings and his authority came to be almost final.  One writer is quoted as saying that even the Summa Theologica of St Thomas Aquina – the Angelic Doctor – is ‘but a hive in whose varied cells he duly stored the honey which he gathered’ from the writings of Dionysius.  The two texts, plus other now lost texts became the basis of all mystical religion within the Christian Church and their influence is discernible in every mystical sect of Christendom.

Dionysius insisted on personal experience as the primary aspect in religion and so became the ‘father’ of a great family of devout mystics who advanced a more realistic portrayal of religious experience.  “He kindled in multitudes of souls a pure passion for the spiritual and taught the very dark ages that the one thing worth seeking with the entire being was ‘heaven’”.