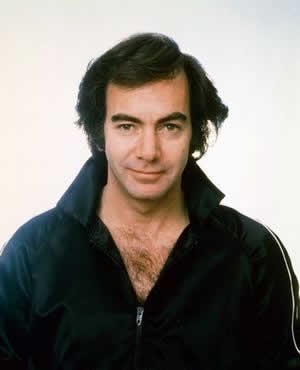 Neil  Diamond (born January 24, 1941) is an American singer-songwriter with a career that began in the 1960s. Diamond has sold over 125 million records worldwide including 48 million in the United States alone. He has had ten number one hit singles: "Cracklin' Rosie", "Song Sung Blue", "Longfellow Serenade", "I've Been This Way Before", "If You Know What I Mean", "Desiree", "You Don't Bring Me Flowers", "America", "Yesterday's Songs", and "Heartlight". Diamond continues to record and release new material and maintains an extensive touring schedule.

He is obviously a very successful singer songwriter, but on the evidence of the songs above, one would not have  placed him in the spiritually aware category.  He appeals to mainstream public American opinion and this is neither spiritual nor even spiritually aware.  Ask the average American to name a spiritual person and they would probably say Jack Daniels.

But Neil Diamond departed from the mainstream with the music for the film Jazz singer, which seemed to touch roots deep within of which he himself was probably unaware.  His songs for this film are in many cases extraordinarily emotional and sincere, from the heart.

There is little in his life that points to any early spiritual yearnings or inclinations.   He was born in Brooklyn, New York, to a Jewish family descended from Russian and Polish immigrants, but his ancestry does not seem to have meant much to him.   He said on a TV show that:

This sounds promising, but hopes are dashed, as during his senior year in New York University, a music publishing company made him an offer to write songs for $50 a week. So his granny's memory got forgotten, never to be revived and he 'started on the road to stardom'.

There is also no indication that his love life was much of a driver.  He is famous for his rather bitter tirade during a concert, concerning an ex girlfriend who dumped him [he seemed to think that she must be regretting it after all the money he made, which shows he does not understand women very well].  He has been married three times. In 1963 he married his high school sweetheart, school teacher Jayne Posner; they had two daughters, Marjorie and Elyn, before they separated in 1967 and divorced in 1969. Diamond then married Marcia Murphey, a production assistant; they also had two children, both sons, Jesse and Micah. Diamond's second marriage ended in about 1994.  In  2011, Diamond announced his engagement to 41-year-old Katie McNeil. McNeil is Diamond's manager.  In 2012, Diamond married McNeil in  Los Angeles, California.  But there is nothing to indicate that any of these relationships had any effect on his song writing at all.

No, where we have to look is a brush with death.

In 1979, Diamond collapsed on stage in San Francisco and was taken to the hospital where he endured a twelve hour operation to remove what turned out to be a tumour on his spine. He  had been losing feeling in his right leg "for a number of years but ignored it". When he collapsed, he had no strength in either leg. He underwent a long rehabilitation process, mentally and physically and all this took place just prior to the filming of the 1980 film The Jazz Singer. He was so convinced he was going to die, he even wrote farewell letters to his friends.  So I think his driver was trauma.

Diamond starred opposite Laurence Olivier and Lucie Arnaz. The movie was not a hit, - at least not in the USA.  In Europe it was more favourably received, we are a more sentimental and soft hearted lot I think.   For his role in the film, Diamond became the first-ever winner of a Worst Actor Razzie Award.  Now this is excellent stuff, because we all know that we have to take the opposite of what the critics say to find out what is 'right' and true.  To have the critics pan him was marvellous – it was probably his only good role.

His songs on this film come from a different place – from the heart.  They are not just good they are inspired.  It is only these songs he will ever be remembered for.  Summer love is particularly lovely as is Songs of life.  But Love on the Rocks is also nice.

Sadly, his brush with death does not appear to have had any lasting positive effects.  Whatever effects they had were but temporary.  On November 24, 2011, for example, he appeared in the Macy's Thanksgiving Day Parade, riding on a replica Mt. Rushmore [the Native American Indians once sacred mountain] float and singing shortened versions of "America" and "Sweet Caroline" to promote tourism for the state of South Dakota.  And if you don't understand why this is not a good sign, then you may be better heading to the EROWID site for your spiritual experience.