In 1898, while studying to be an engineer at the Académie Camillo, he attended painting classes under Eugène Carrière, and there met Matisse. In 1900, he met and shared a studio with Maurice de Vlaminck and together they began to paint scenes in the neighbourhood, but this was interrupted by military service at Commercy from September 1901 to 1904. Following his release from service, Matisse persuaded Derain's parents to allow him to abandon his engineering career and devote himself solely to painting; subsequently Derain attended the Académie Julian.

From this point on, his paintings can be classified into three main styles and periods 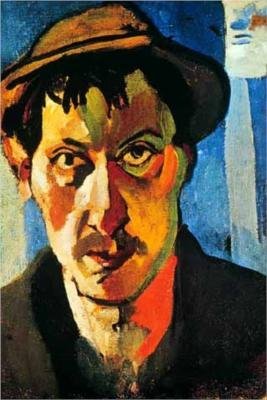 Fauvism –  Derain and Matisse worked together through the summer of 1905 in the Mediterranean village of Collioure and later that year displayed their paintings at the Salon d'Automne. The vivid, colours and wild brush strokes led the critic Louis Vauxcelles to derisively dub their works as les Fauves, or "the wild beasts", marking the start of the Fauvist movement.  But the paintings of this period are stunning – really inspired.  They are highly innovative, beautifully composed and novel without being commercially quirky.  The ideas are fresh and new – a big departure from any other painter of the time.  Derain did not copy Matisse but he was clearly helped by his presence, friendship and enthusiasm.  Derain was still only 25.  In March 1906, the noted art dealer Ambroise Vollard sent Derain to London to produce a series of paintings with the city as subject. In 30 paintings (29 of which are still extant), Derain presented a portrait of London that was radically different from anything done by previous painters. With bold colours and compositions, Derain painted multiple pictures of the Thames and Tower Bridge. These London paintings remain among his most popular work, justifiably so.  Then things started to go very wrong.

Gothic period -  In 1907 art dealer Daniel-Henry Kahnweiler purchased Derain's entire studio, granting Derain financial stability. Derain moved to Montmartre and there became far more influenced by his friend Pablo Picasso and other noted artists. His ‘friends’ introduced him to absinthe and opium and all the other substances of abuse they used.  He had the money, so he could have whatever he wanted.  And Derain’s paintings took a nose dive.  At Montmartre, Derain began to shift from the brilliant Fauvist palette to more muted tones. He lost his inspiration and became gradually more and more influenced by the art of others.  He studied African art and the work of the Old Masters. And colour leeched away from his paintings, as they became more austere.  The years 1911–1914 are sometimes referred to as his gothic period. Derain might well have been an addict by this time, his paintings certainly express an addict’s view of the world.  But then along came the War. 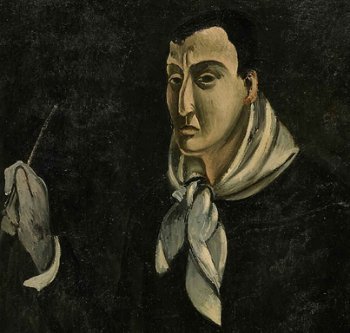 Classic period - In 1914, Derain was mobilized for military service in World War I and until his release in 1919 he would have little time for painting and certainly little opportunity for absinthe drinking or drugs.  After the war, Derain was a changed man.  The war appeared to have had a dramatic effect, he spurned his Fauvist days and his Gothic period and turned instead to ‘traditional’ classic painting.
This period is marked by occasional bursts of real innovation.   In 1919 he designed the ballet La Boutique fantasque for Diaghilev, leader of the Ballets Russes. A major success, it would lead to his creating many ballet designs.  During the 1920s, Derain mainly stayed in Southern France, where he painted his famous pierrots, harlequins and numerous dancers. The style is totally different from his Fauvist days, it has a hard edge, almost a cynical edge, but is technically good and at times inspired.

The 1920s marked the height of his success, he was awarded the Carnegie Prize in 1928 and began to exhibit extensively abroad—in London, Berlin, Frankfurt, Düsseldorf, New York City and Cincinnati, Ohio.  But this was not inspired art, this was commercial art.

Derain seems not to have realised that the style he called his own right at the beginning of his career was ‘right’. Only at this time could he have been really called inspired.  At all other times he was copying and adapting –  using his technical skills to create novel new works.

And in this copying phase he was like a demented butterfly.  He was influenced by the work of Cézanne, then by the early Cubist paintings of Picasso and Braque, by Old Masters, by the pointillism of Seurat, the paintings in the Louvre, ‘where he admired the early Renaissance works in particular’. Talking of his frequent visits there, he once said, ‘That seemed to me then, the true, pure absolute painting.’ Then there was a complete shift back to the past, particularly after 1922 when Lenin had publicly pronounced his disdain for abstract art.  He also collected art according to which style he was most fascinated with, building up an immense collection of paintings, sculpture and objets d’art. His eclectic collection was constantly changing. In 1930 he sold his African collection in exchange for bronzes of antiquity and the Renaissance.  He later pursued Greek ceramic painting.

All artists evolve, all artists admire the work of other true artists, but when inspired their style remains their own, immediately recognisable and they do not waver from it because inspiration comes from the heart and not the head.

During the German occupation of France in World War II, Derain lived primarily in Paris and was much courted by the Germans because he represented the image of what the Nazis considered good art – which ought to tell all.  Derain even accepted an invitation to make an official visit to Germany in 1941, and travelled with other French artists to Berlin. Derain's presence in Germany was used effectively by Nazi propaganda, and after the Liberation he was branded a collaborator and ostracised by many former supporters.

A year before his death, he contracted an eye infection from which he never fully recovered. He died in Garches, Hauts-de-Seine, Île-de-France, France in 1954 when he was struck by a moving vehicle.

So what ultimately inspired Derain when he was inspired?

It was not love or sensuality.  Fernande Olivier, Picasso's mistress at the time that he was sinking into his Gothic phase, described Derain as:
Slim, elegant, with a lively colour and enamelled black hair. With an English chic, somewhat striking. Fancy waistcoats, ties in crude colours, red and green. Always a pipe in his mouth, phlegmatic, mocking, cold, an arguer.
Later in his life he was married [to Alice] and he had a son Andre, but there is no indication that his family was his inspiration and they rarely formed the subject of his paintings.

Derain was born a naturally gifted artist, receiving his first painting lessons from his friend La Noé when only 15.  If we look at a later self portrait we can also see he was left handed - self portraits were done in those days using mirrors, he holds the brush in his right hand - so he is left handed.  He was also naturally spiritually inclined..

Tate Gallery - Derain - notes on 'The family' [the picture of his family]
Derain's views on art and on the function of the artist can be pieced together from the notes he wrote very early in his career….. He believed that in all types of art there were certain recurring features that belied temporal and cultural distinctions ….. Derain studied esoteric subjects such as alchemy and the cabbala, as well as mysticism and Eastern philosophy; and his writings show a gnostic approach to the question of the relationship of spirit and matter. He believed that there was a divine ‘signature’ in all things, and that it was the artist's role to sense this presence and embody it in his work. However, this divine force was never to be revealed: ‘Blessed are those who veil nature’, he wrote, ‘to make others believe in the divine. The divine ought to be veiled and matter ought to be the apparent goal’ In other words, the artist's work was almost as mysterious as the alchemist's dream of transmuting base metal into gold….. Art, Derain argued, should be based on an intuitive rather than rational understanding of the world