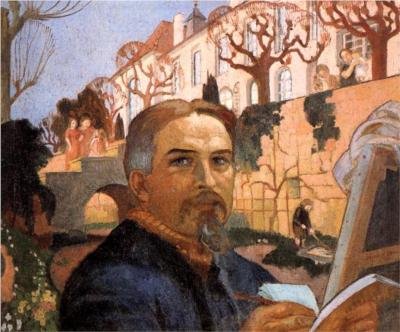 Maurice Denis (November 25, 1870 – November 1943) was a French painter and writer, and for a while was a ‘member of the Symbolist and Les Nabis movements’ along with Bonnard and Vuillard.  Les Nabis were a group of young artists committed to creating work of a symbolic and spiritual nature, as such to call him a member of the Nabis and a symbolist is a bit pointless as the one follows from the other.

Denis was a very religious man throughout his life.  He drew material for his paintings from the Bible and wrote in his notebook at age 15, "Yes, it's necessary that I am a Christian painter, that I celebrate all the miracles of Christianity, I feel it's necessary."  Although the subjects of his mature works include landscapes and figure studies, his primary interest remained the painting of religious subjects, like "The dignity of labour", commissioned in 1931 by the International Federation of Christian Trade Unions to decorate the main staircase of the Centre William Rappard.

He was also a Catholic tertiary.  In relation to religious orders, a third order is an association of persons who live according to the ideals and spirit of [in this case] the established Catholic church.  The "first order"  are the friars, the "second order" are the contemplative nuns associated with the "first order" and the third order, known as tertiaries are men and women who do not take religious vows, but participate in so called ‘good works’.  They may be allowed to wear at least some elements of the order's habit, such as a scapular.   Roman Catholic canon law states:
Associations whose members share in the spirit of some religious institute while in secular life, lead an apostolic life, and strive for Christian perfection under the higher direction of the same institute are called third orders or some other appropriate name.

Maurice Denis was born November 25, 1870, in Granville, Manche, a coastal town in the Normandy region of France.   The Denis family was affluent, and young Maurice attended both the École des Beaux-Arts and the Académie Julian, where he studied with the French figure painter and theorist Jules Joseph Lefebvre.  He was technically not a particularly good artist, so money bought what talent could not. 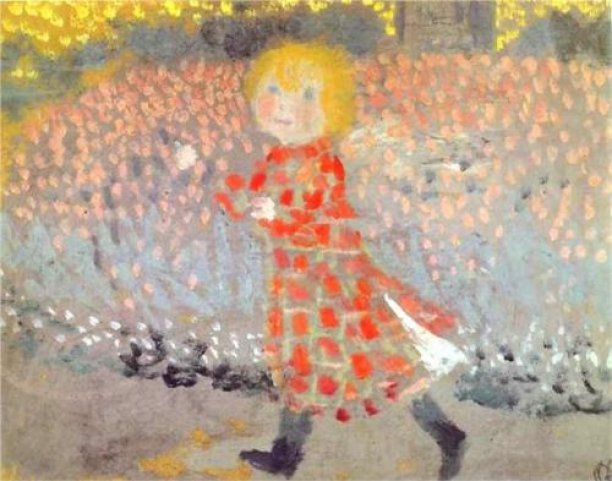 But at the Académie, he met painters and future Nabi members including Paul Sérusier, Pierre Bonnard, Édouard Vuillard and Ker-Xavier Roussel. In 1890, they formed The Nabis. The group would split apart by the end of the decade.  After Les Nabis, Denis went on to focus on religious subjects and murals.

What is somewhat fascinating about Denis is that the only really symbolic and spiritually inspired paintings he did was whilst he was with the Nabis.  He is one of the few painters on this site who were inspired by friendship and companionship.  So, since friendship and camaraderie is a form of love, he was essentially inspired for a short while by love and this was further bolstered by his love for a woman – his wife.  Denis – given his strict Catholic upbringing and views – was unlikely to have ever had a mistress, but Denis married his first wife, Marthe Meurier, in 1893 and the marriage appears to have been a happy one. They had seven children, and she would pose for numerous Denis works.  Following her death in 1919, Denis painted a chapel dedicated to her memory.  So love was the principle driver – love of his fellow Nabis members, love for his children and love for his wife and it produced some really inspired painting – not technically good, but inspired – in a little window of about 10 years.

Although art historians and academics revel in his later works and his theories, art is not about theories and generally it is somewhat difficult to write about them if you are an artist.  In 1922, he published his collected historical and theoretical work as "Nouvelles théories sur l’art moderne, sur l’art sacré"—that is, "New Theories of Modern and Sacred Art."  To give you some idea of how things had degenerated, in his proposal for the definition of painting, offered in 1890, he stated: "Remember that a picture, before being a battle horse, a nude, an anecdote or whatnot, is essentially a flat surface covered with colours assembled in a certain order."  But then so is wallpaper.  There is more.  In 1898, he produced a theory of creativity that found the source for art in the character of the painter: "That which creates a work of art is the power and the will of the artist."  In effect he was denying the existence of inspiration, which for a supposedly religious man is to say the least a little odd.  Or maybe it isn’t.

Denis died in Paris of injuries resulting from an automobile accident in November 1943.