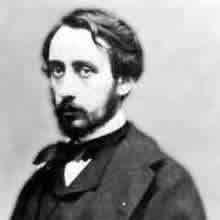 Edgar Degas (1834 – 1917), was a French artist famous for his work in painting, sculpture, printmaking and drawing. His early career was unremarkable.  He obtained a 'rigorous academic training' and made a 'close study of classical art' with a view to becoming a history painter.  But upon his return to Paris in 1859, he changed course.

Degas was left handed [self portraits with cigarettes and brushes show him to be right handed which since painters use a mirror to paint themselves indicates he was left handed] and thus naturally creative and 'right brained'. 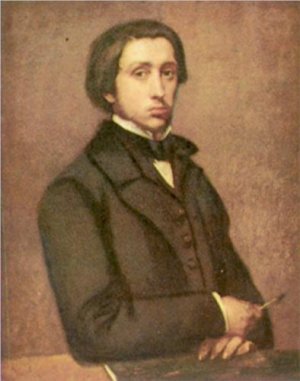 His early paintings were historical as planned.  He  moved into a large Paris studio and began to paint The Bellelli Family— it remained unfinished until 1867. He also began work on Alexander and Bucephalus and The Daughter of Jephthah in 1859–60; Sémiramis Building Babylon in 1860; and Young Spartans around 1860.  He exhibited at the Salon for the first time in 1865, when the jury accepted his painting Scene of War in the Middle Ages.  It attracted little attention.  Technically Degas was always a superb draftsman, but in these early days he was not an inspired painter. 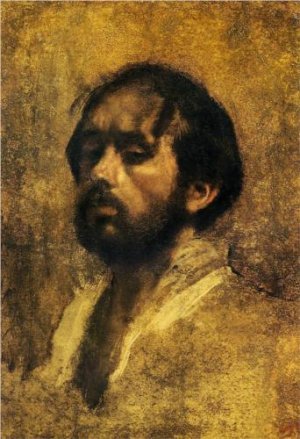 The absinthe started to do its unfortunate work not long afterwards and his Steeplechase—The Fallen Jockey (Salon of 1866) signaled his growing commitment to contemporary subject matter.  He was just 32.

At the outbreak of the Franco-Prussian War in 1870, Degas enlisted in the National Guard, where his defense of Paris left him little time for painting. During rifle training his eyesight was found to be defective, and for the rest of his life his eye problems were a constant worry.  After the war, in 1872, Degas began an extended stay in New Orleans, Louisiana, staying at the home of his Creole uncle, Michel Musson.  Degas returned to Paris in 1873.

Degas produced much of his greatest work during the decade beginning in 1874.  By now thoroughly disenchanted with the Salon, Degas joined forces with a group of young artists who were intent upon organizing an independent exhibiting society. The first of their exhibitions, which were quickly dubbed Impressionist Exhibitions, was in 1874. The Impressionists subsequently held seven additional shows, the last in 1886. Degas took a leading role in organizing the exhibitions, and showed his work in all but one of them, despite his persistent conflicts with others in the group. 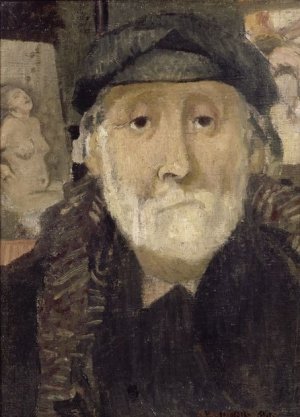 A portrait of Degas by Maurice Denis 1906

As the years passed, Degas became isolated, and even more argumentative.  Renoir said of him: "What a creature he was, that Degas! All his friends had to leave him; I was one of the last to go, but even I couldn't stay till the end."   He never married and spent the last years of his life, nearly blind, restlessly wandering the streets of Paris before dying in September 1917.

Degas is regarded as one of the founders of Impressionism .  His paintings are soft and dreamy and the colours are jewel like and intense.  The compositions were for their time most unusual – large areas of space and blocks of colour, odd perspectives, high centres of interest.  He became inspired.  He is especially identified with the subject of dance, and over half of his works depict dancers. These display his mastery in the depiction of movement, as do his racecourse subjects and female nudes. His portraits are notable for their psychological complexity and depiction of human isolation.

But what a price to pay for such mastery.  The absinthe, along with the lead in the paint,  attacked him in a quite brutal way robbing him of his eyesight, his friends, his home, his peace of mind and eventually his life.

A much fuller description with a gallery can be found on Wikipedia's entry for Degas, follow the LINK.

The Wikipaintings gallery which has a very comprehensive collection of his paintings can be found using this LINK.  The gallery has 619 paintings.

A ballet dancer in Degas's paintings was the embodiment of the feminine, in some cases he elevated her to the role of Higher spirit.  Her dress is a cone, she is a little cone of energy with her head as the Higher spirit, just like the fairy on the Christmas tree.

He also had a fascination with Horses - again the symbolism is constant.