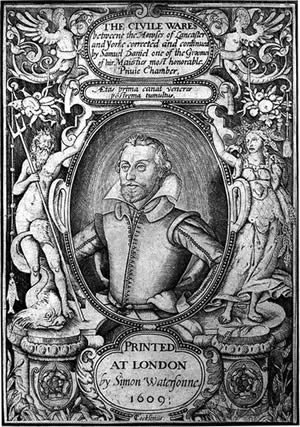 Samuel Daniel (1562 – 1619) was an English poet and historian. He was born near Taunton in Somerset, the son of a music-master. In 1579, he was admitted to Magdalen Hall, Oxford University, where he remained for about three years studying poetry and philosophy.

He was a great innovator in verse. His style is “full, easy and stately, .. musical and coherent encompassing scholarly grace and tender, mournful reverie”. Shakespeare, Selden and Chapman were among his friends. But Fuller tells us, he would "lie hid for some months together, the more retiredly to enjoy the company of the Muses, and then would appear in public to converse with his friends.".  His Muses, however, might not be exactly what one thinks of when using the word 'muse'.

Daniel was inspired by women – love, romance, quite probably making love. He was a prolific poet, but his best and most inspired poems seem to coincide with 'friendships' with women. He was first encouraged and, by his own account, taught in verse, by the famous Countess of Pembroke, “whose honour he was never weary of proclaiming”.  His first known volume of verse is dated 1592; it contains the cycle of sonnets to Delia and the romance called The Complaint of Rosamond. Dedicated to "The Right Honourable the Lady Mary Countess of Pembroke", we learn that Delia lived on the banks of the River Avon—not Shakespeare's Avon, but the one which flowed through "where Delia has her seat" at Wilton in Wiltshire—and that the sonnets to her were inspired by her memory when the poet was in Italy. The Complaint of Rosamond, is a soliloquy in which the ghost of the murdered woman appears and bewails her fate in “stanzas of exquisite pathos”. 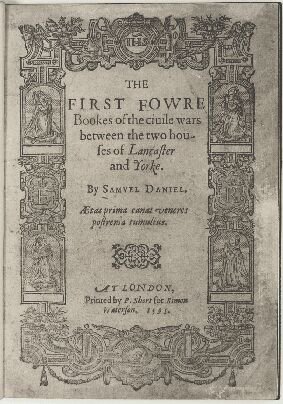 It was not until 1599 that a volume of his poems was published. It was entitled Poetical Essays, which contained, “poems in Daniel's finest and most mature manner.” About this time he became tutor to Lady Anne Clifford, daughter of Margaret Clifford, Countess of Cumberland. The epistle to Lucy, Countess of Bedford, is remarkable among those as being composed in genuine terza rima, till then not used in English. Daniel has been suggested as a possible author of the anonymous play The Maid's Metamorphosis (1600)

In 1603, Daniel was appointed “master of the queen's revels”. In this capacity he brought out a series of masques and pastoral tragi-comedies—of which were printed The Vision of the Twelve Goddesses (1604); The Queen's Arcadia, an adaptation of Guarini's Pastor Fido (1606); Tethys' Festival or the Queenes Wake (1610); and Hymen's Triumph, in honour of Lord Roxburghe's marriage (1615). Hymen's Triumph is considered the best of his dramatic writing.

A 1604 performance of his play Philotas led to his being called before the Privy Council. The hero of the play was perceived to resemble Robert Devereux, 2nd Earl of Essex—“a troubling connection, given the Earl's 1601 execution for treason”.[Doesn't he sound fun?] 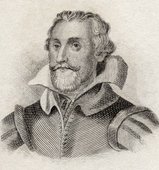 Daniel was eventually made a “gentleman-extraordinary” and groom of the chamber to Queen Anne, sinecure offices which “did not interfere with his literary career”. I'm sure it helped it along rather well.

Late in life Daniel "threw up his titular posts" - so he stopped being a troubador -  at court and retired to a farm called "The Ridge," (in the hamlet now known as "Rudge") near Beckington, in Somerset. Here he died on 14 October 1619.