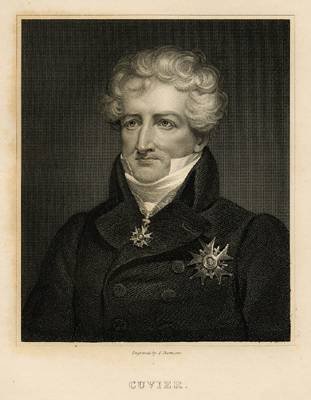 Cuvier was a major figure in natural sciences research in the early 19th century and was instrumental in establishing the fields of comparative anatomy and paleontology through his work in comparing living animals with fossils.

Cuvier's work is considered the foundation of vertebrate paleontology, and he expanded Linnaean taxonomy by grouping classes into phyla and incorporating both fossils and living species into the classification.

Cuvier is also known for establishing extinction as a fact—at the time, extinction was considered by many of Cuvier's contemporaries to be merely controversial speculation. In his Essay on the Theory of the Earth (1813) Cuvier proposed that new species were created after periodic catastrophic floods. His study of the strata of the Paris basin with Alexandre Brongniart established the basic principles of biostratigraphy.

Cuvier was born in Montbéliard, a town attached to the German duchy of Württemberg until the 1790s, when it passed to France. In 1784–88 Cuvier attended the Académie Caroline (Karlsschule) in Württemberg’s capital, Stuttgart, where he studied comparative anatomy and learned to dissect. 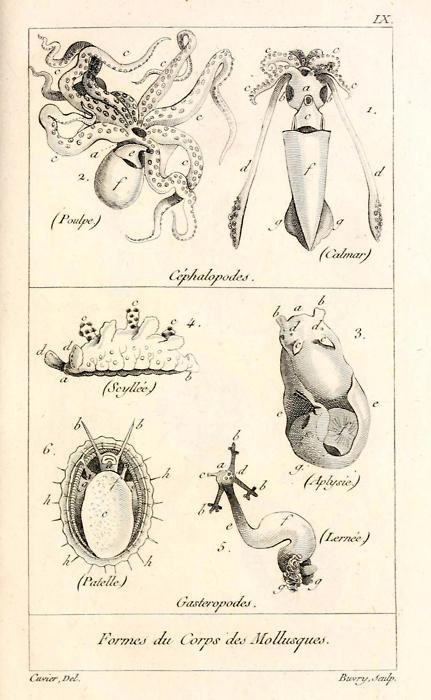 After graduation Cuvier served in 1788–95 as a tutor, during which time he wrote original studies of marine invertebrates, particularly the mollusks. His notes were sent to Étienne Geoffroy Saint-Hilaire, a professor of zoology at the Museum of Natural History in Paris, and at Geoffroy’s urging Cuvier joined the staff of the museum. For a time the two scientists collaborated, and in 1795 they jointly published a study of mammalian classification.

Cuvier refused an invitation to become a naturalist on Napoleon’s expedition to Egypt in 1798–1801, preferring to remain at the museum to continue his research in comparative anatomy. His first result, in 1797, was Tableau élémentaire de l’histoire naturelle des animaux (“Elementary Survey of the Natural History of Animals”), a popular work based on his lectures.

In 1800–05, he published his Leçons d’anatomie comparée (“Lessons on Comparative Anatomy”). In this work, based also on his lectures at the museum, he put forward his principle of the “correlation of parts,” according to which the anatomical structure of every organ is functionally related to all other organs in the body of an animal, and the functional and structural characteristics of organs result from their interaction with their environment. 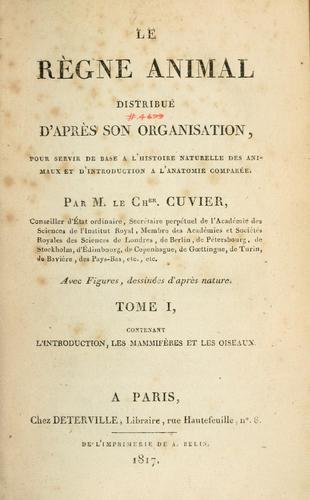 This aspect of Cuvier’s work seems poorly understood by today’s somewhat materialistic scientists.  Cuvier in effect acknowledged the existence of spirit – the software of the universe, that which animates.  He was a religious man, but his religion was based on his understanding of the unseen world, the functions, the function dependencies and the systems of the universe.

Cuvier is remembered for strongly opposing physical evolutionary theories. He believed there was no evidence for the stand-alone evolution of organic forms, but rather evidence for successive spiritual creations after catastrophic extinction events that became physical creations.

It is little wonder that this aspect of his work has been buried in these days of material science, but they are key to his work.  Cuvier believed that form followed function, that function had been ‘designed’ first and that form simply followed on in its design from the functional requirement.  So to use a simple example, the functional requirement is to ‘fly’ and the design solution in physical terms is wings, but wings would not work unless a great number of laws relating to air currents and lift had not also been put in place.  ‘Laws’ are spirit – system, software.

Cuvier extended his ideas to include everything, for example, the functions and habits of an animal determine its anatomical form, [this is in contrast to Geoffroy, who held the reverse theory—that anatomical structure preceded and made necessary a particular mode of life].  He further argued that each species was created for its own special purpose and each organ for its special function.  This is the theory of aggregates. 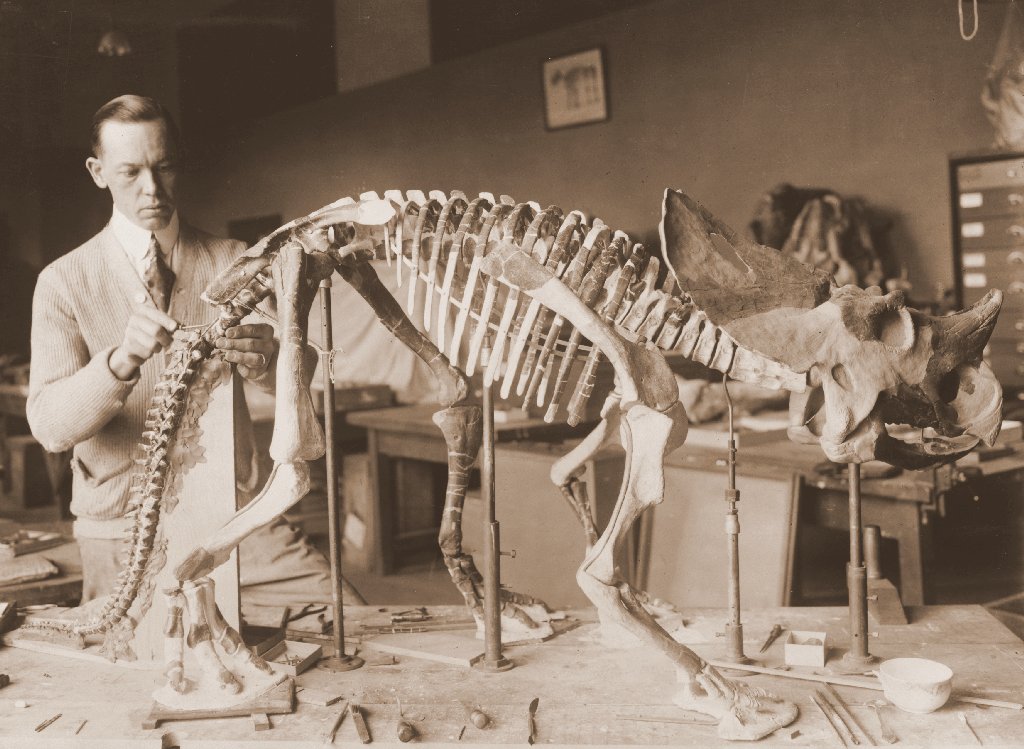 Cuvier also applied his views on the correlation of parts to a systematic study of fossils that he had excavated.

Furthermore, he discerned a remarkable sequence in the creatures he exhumed. The deeper, more remote strata contained animal remains—giant salamanders, flying reptiles, and extinct elephants—that were far less similar to animals now living than those found in the more recent strata.

He summarized his conclusions, first in 1812 in his Recherches sur les ossements fossiles de quadrupèdes (“Researches on the Bones of Fossil Vertebrates”), which included the essay “Discours préliminaire” (“Preliminary Discourse”), as well as in the expansion of this essay in book form in 1825, Discours sur les révolutions de la surface du globe (“Discourse on the Revolutions of the Globe”). 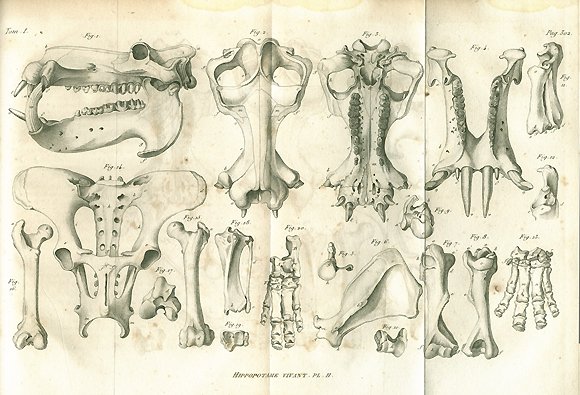 Among his other accomplishments, Cuvier established that elephant-like bones found in the USA belonged to an extinct animal he later would name as a mastodon, and that a large skeleton dug up in Paraguay was of Megatherium, a giant, prehistoric ground sloth.

He named the pterosaur Pterodactylus, described the aquatic reptile Mosasaurus, and was one of the first people to suggest the earth had been dominated by reptiles, rather than mammals, in prehistoric times.

Just before Napoleon abdicated, in 1814, Cuvier was elected to the Council of State, and in 1817 he became a vice president of the Ministry of the Interior. In 1817 he also published Le Règne animal distribué d’après son organisation (“The Animal Kingdom, Distributed According to Its Organization”), which, with its many subsequent editions, was a significant advance over the systems of classification established by Linnaeus.

Cuvier showed that animals possess so many diverse anatomical traits that they could not be arranged in a single linear system. Instead, he arranged animals into four large groups—vertebrates, mollusks, articulates, and radiates—each of which had a special type of anatomical organization. All animals within the same group were classified together, as he believed they were all modifications of one particular anatomical type. Although his classification is no longer used, Cuvier broke away from the 18th-century idea that all living things were arranged in a continuous series from the simplest up to man. 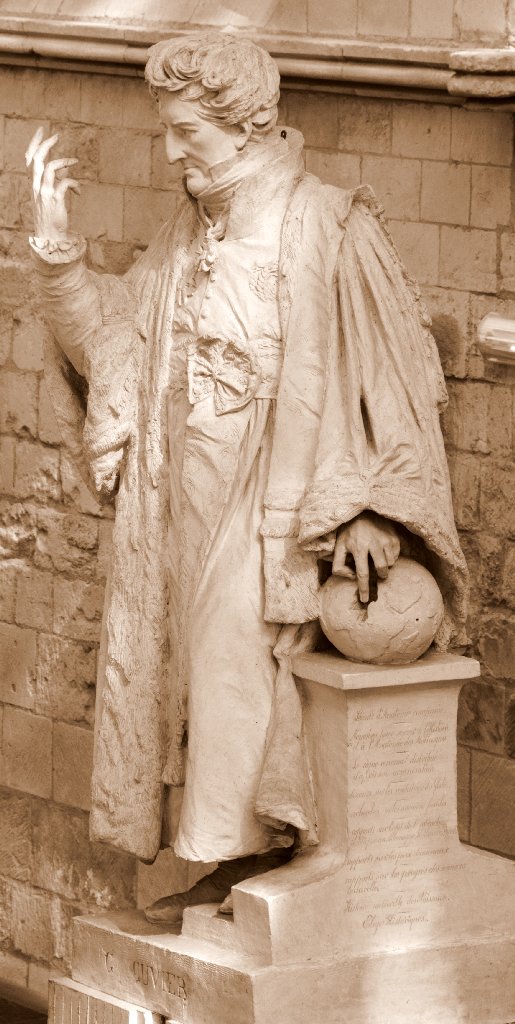 In effect, Cuvier described the principles of Reuse, as well as the Tree of Life and the Intelligence hierarchy.

He also elucidated the difference between configurations, which are very major changes in both function and form, as well as increments, which are the tweaking that occurs afterwards.

He established and explained the nature of the systems of the universe, described function dependencies, and the integrated nature of all natural systems.

He also understood the principle of aggregates, that aggregates have functions specific to them, as opposed to the individual functions of their constituent parts.  So, for example, a plant has specific functions as a whole and is not just the sum of its chemicals, a theory poorly understood even today.

In 1819, he was created a peer for life in honour of his scientific contributions.

Thereafter, he was known as Baron Cuvier.

He died in Paris during an epidemic of cholera.

At first sight the process of evolution looks extremely wasteful with most development running into the dead ends of extinction, but even in their failure these contribute something to the few species that do succeed.

It is imperative that there should be a multitude of participants so that life can move on a broad front, testing all possibilities in a search for the right ones.  Even those that die have not lived in vain, because news of their failure is broadcast and becomes part of the inheritance of supernature.  This communion is possible because life shares a mutual sensitivity to the cosmos, has a common origin and speaks the same organic language