Constantine "Cus" D'Amato (January 17, 1908 – November 4, 1985) was an American boxing manager and trainer who handled the careers of Mike Tyson, Floyd Patterson, and José Torres.  All three went on to become members of the International Boxing Hall of Fame. Several successful boxing trainers, including Teddy Atlas, Kevin Rooney, and Joe Fariello, were also tutored by D'Amato.

A great deal of discussion is wasted on the style of boxing he taught and his approach, when his approach was essentially entirely spiritual – something which may not seem to go with the world of boxing at all.  But when Mike Tyson in his autobiography – The Undisputed Truth – writes that much of Cus’s coaching involved “talking about the spiritual aspects of the game”, then indeed one sits up and takes notice. 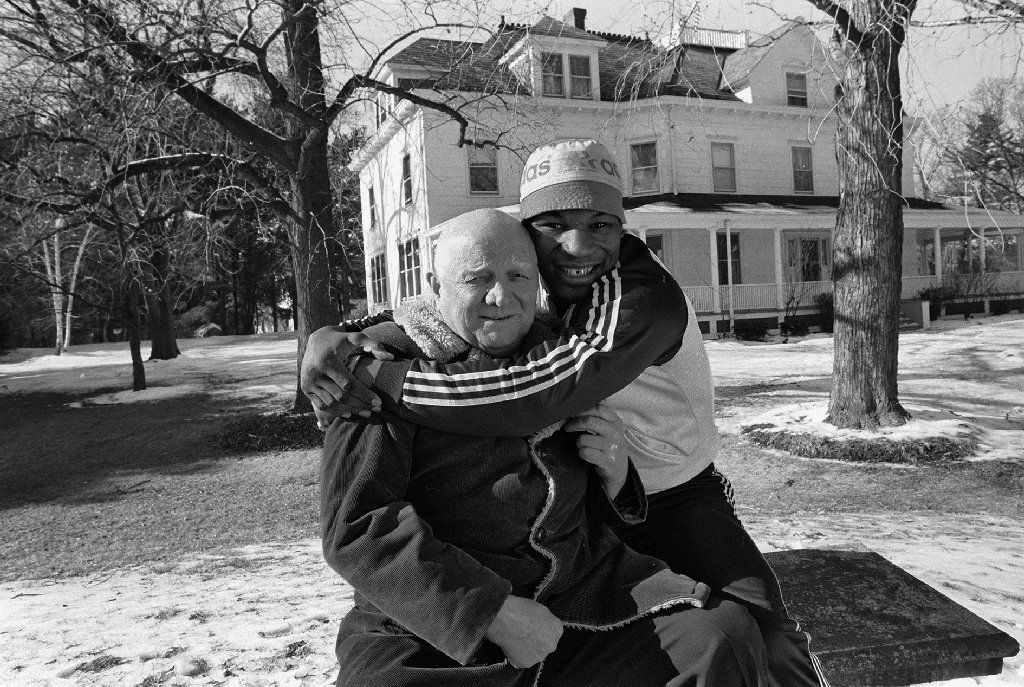 D'Amato was born to an Italian family in the Bronx, on January 17, 1908. His father Damiano D'Amato delivered ice and coal in the Bronx using a horse and cart. At a young age Cus became very involved and interested in the Catholic church, and at times during his youth, he even considered becoming a priest.

He had a brief career as an amateur boxer, boxing as a featherweight and lightweight, but was unable to get a professional license because of an eye injury he had suffered in a street fight.

In 1933 he opened the Empire Sporting Club with Jack Barrow at the Gramercy Gym. D'Amato lived in the gym for years. According to D'Amato, he spent his time at the gym waiting for a "champion," but his best fighters would routinely be poached by "connected" managers. One fighter discovered by D'Amato was Rocky Graziano, who signed with other trainers and managers and went on to become middleweight champion of the world.

… Cus was totally ‘colour blind’.  His father’s best friend was black.  When he was in the army, stationed in the South, he had a boxing team.  When they travelled, no hotel would take his black fighters, so he slept with them in parks……Cus could relate to me because he’d had a hard life too.  His mother died at a very early age.  He’d lost his vision in one eye in a street fight when he was a little kid.  His father died in his arms when he was a young man. 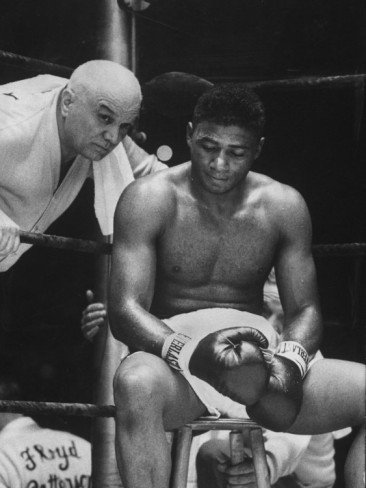 D'Amato then guided Patterson through the professional ranks, manoeuvering Patterson into fighting for the title vacated by Rocky Marciano.

He beat Moore by a knockout in five rounds and became the youngest World Heavyweight Champion in history at the time, at the age of 21 years. He was the first Olympic gold medalist to win a professional Heavyweight title. 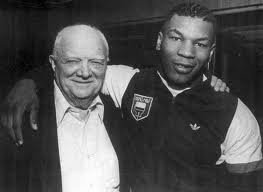 After Patterson's and Torres's careers had ended, D'Amato worked in relative obscurity.

He eventually moved to Catskill, New York, where he opened a gym.  And it is here that it gets especially interesting because Mike Tyson is a very good documenter of what happened next.

Shortly after … Bobby came to me with an idea. "I want to bring you to see this legendary boxing trainer Cus D’Amato. He can take you to the next level.

"What the heck is going on here?" I asked. I didn't trust anybody but Bobby Stewart at that particular time. Now he was going to transfer me over to another person?

"Just trust this man," he told me.

So one weekend in March of 1980, Bobby and I drove to Catskill, New York. Cus's gym was a converted meeting hall that was above the town police station. There were no windows so they had some old-fashioned lamps to provide light. I noticed there were posters on the walls and clippings of some of the local boys who were doing well.

Cus looked exactly like what you'd envision a hard-boiled boxing trainer to look like. He was short and stout with a bald head and you could see that he was strong. He even talked tough and he was dead serious; there wasn't a happy muscle in his face. 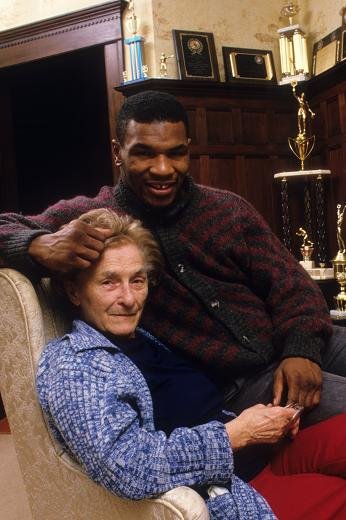 "How you doin', I'm Cus," he introduced himself. He had a strong Bronx accent. He was with a younger trainer named Teddy Atlas.  Bobby and I got in the ring and started sparring. I started out strong, really knocking Bobby around the ring. We would usually do three rounds, but in the middle of the second round Bobby hit me in the nose with a couple of rights and I started bleeding. It didn't really hurt but the blood was all over my face.

"But, sir, please let me finish this round and go one more round. That's what we normally do," I pleaded. I wanted to impress Cus.  I guess I had. When we got out of the ring, Cus's first words to Bobby were, "That's the heavyweight champion of the world."

Right after that sparring session, we went to Cus's house for lunch.  He lived in a big white Victorian house on ten acres. You could see the Hudson River from the porch. There were towering maple trees and large rosebushes on the side of the house. I had never seen a house like that in my life.

We sat down and Cus told me he couldn't believe I was only thirteen years old. And then he told me what my future would be. He had seen me spar for not even six minutes, but he said it in a way that was like law.

"You looked splendid," he said. "You're a great fighter." It was compliment after compliment. "If you listen to me, I can make you the youngest heavyweight champion of all time."

Fuck, how could he know that shit? I thought he was a pervert. In the world I came from, people do shit like that when they want to perv out on you. I didn't know what to say. I had never heard anyone say nice things about me before. I wanted to stay around this old guy because I liked the way he made me feel. I'd later realize that this was Cus's psychology. You give a weak man some strength and he becomes addicted.

I was excited on the ride back to Tryon. I was sitting with a bunch of Cus's roses in my lap. I had never seen roses in person before, only on television, but I wanted some because they looked so exquisite. I wanted to have something nice to take back with me so I asked him if I could take some. Between the smell of the roses and Cus's words ringing in my ears, I felt good, like my whole world had changed. In that one moment, I knew I was going to be somebody.

"I think he likes you," Bobby said. "If you're not a prick and an asshole, this will go well."

I got back to my cottage and put the roses in water. Cus had given me a huge boxing encyclopedia to look at and I didn't sleep that whole night, I just read the whole book. I read about Benny Leonard and Harry Greb and Jack Johnson. I got turned out real bad. I wanted to be like those guys; they looked like they had no rules. They worked hard, but on their downtime they just lounged and people came to them like they were gods.

I started going out to Cus's house every weekend to work out. I'd work with Teddy in the gym and then I’d stay over at Cus's house.  There were a few other fighters living there with Cus and his companion, a sweet Ukrainian lady named Camille Ewald. When I first got to the house, I would steal money from Teddy's wallet. Hey, that shit doesn't go away just because you got some good shit going on. I had to get money for weed. I would hear Teddy tell Cus, "It has to be him."

I was excited about the boxing, but I became certain that boxing was what I wanted to do with my life. 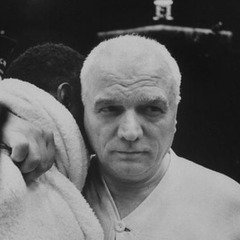 Cus took Tyson under his wing and adopted him after Tyson's mother died. D'Amato trained him over the next few years, encouraging him and gradually, by kindness, teaching him.

It was Kevin Rooney, a protégé of D'Amato, who would eventually guide Tyson to the heavyweight championship sixteen months after D'Amato's death.  D'Amato thus sadly died before seeing Tyson become the youngest world heavyweight titleholder in history at the age of 20 years 4 months, thus supplanting Patterson's record.

Footage of D'Amato can be seen in Tyson, a documentary film released in 2008. Tyson credits D'Amato with building his confidence, turning his life around, and being the only father figure in his life.

Cus D'Amato died at Mount Sinai Hospital of pneumonia in November of 1985. He was 77 years of age.

One day Cus said, "When you make a lot of money, you could really help everybody you ever cared about. You could help the black churches." He thought the black churches were the best grassroots social net for black people. He loved the Reverend Martin Luther King.
Cus was always into helping people and that was how he gave all his money away.
"Money is something to throw off the back of trains," he'd tell me.
"Money means security, and to me security means death, so I never cared about money. To me all the things that I value I couldn't buy for money. I was never impressed with money. Too many of the wrong people have a lot of money so the association is not good. The truth was, I wasn't careless about money. I gave money to people in trouble.  I don't consider that wasting it." 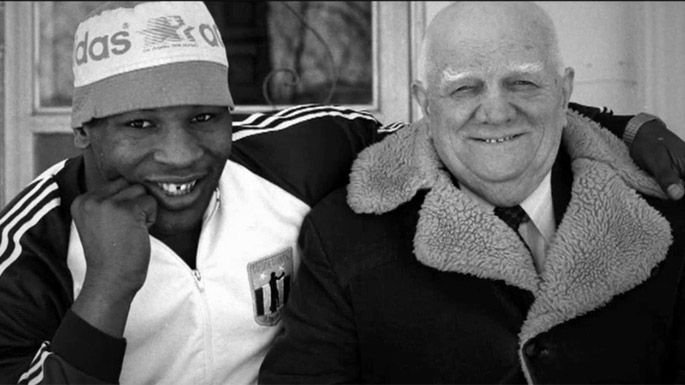