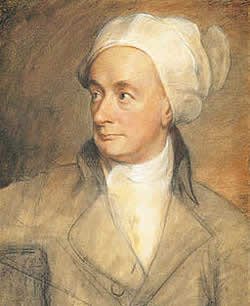 William Cowper (1731 –1800) was an English poet who was also well known for his hymns.  He was one of the most popular poets of his time, and mixed poems about  everyday life and scenes of the English countryside with themes inspired by ' fervent evangelical Christianity', the inspiration behind his hymns.  He also translated  Homer's Iliad and Odyssey into blank verse, and his versions (published in 1791) were the most significant English renderings of these epic poems since those of Alexander Pope earlier in the century.

His evangelical Christianity provided the source of his spiritual insights , but not in the way one might imagine, it was through angst, doubt, fear and terror of being doomed to eternal damnation. He was, in short, traumatised by religion.  His father John Cowper was rector of the Church of St Peter.  So the poor man was immersed in hell fire and damnation from his birth.

Cowper was a sensitive, nervous man.  He fell in love with his cousin Theodora, whom he wished to marry. But, "her father, from an idea that the union of persons so nearly related was improper, refused to accede to the wishes of his daughter and nephew." This refusal left Cowper utterly distraught.

In 1763, he broke under the strain of an approaching examination and experienced 'a period of insanity' – he had a nervous breakdown. At this time, he tried three times to commit suicide and was sent to Nathaniel Cotton's asylum at St. Albans for recovery. His poem beginning "Hatred and vengeance, my eternal portions"  was written in the aftermath of his suicide attempt.

After recovering, he settled at Huntingdon with a retired clergyman named Morley Unwin and his wife Mary. Cowper grew to be on such good terms with the Unwin family that he went to live in their house.  So as we can see he never really managed to escape from religion.  Morley Unwin was killed in a fall from his horse, but Cowper continued to live in the Unwin home and became greatly attached to Mary Unwin.

In 1773, Cowper experienced another attack of insanity, - another nervous breakdown - imagining not only that he was eternally condemned to hell, but that God was commanding him to make a sacrifice of his own life. Mary Unwin “took care of him with great devotion” and after a year he began again to recover. We may get the impression that Mary was Cowper's guardian angel at this time, but in reading some of the explanations, I did wonder whether she might not have been a contributory factor to his illness.  When he was ill for example, Mary Unwin, wanting to keep Cowper's mind occupied, suggested that he write on the subject of The Progress of Error!  Hardly a subject designed to give him much light relief.

Up until then Cowper had principally written hymns, but in 1779,  he started to write  poetry.  All these poems were published in 1782 .

All Cowper's best work was completed whilst he was ill – traumatised.

He wrote other poems, but they have none of the force or spiritual insight of those he wrote when in pain.  For example things took a turn for the better when Cowper met  Lady Austen who served as a new impetus to his poetry. Cowper himself said,

"...a lady, fond of blank verse, demanded a poem of that kind from the author, and gave him the SOFA for a subject. He obeyed; and, having much leisure, connected another subject with it; and, pursuing the train of thought to which his situation and turn of mind led him, brought forth at length, instead of the trifle which he at first intended, a serious affair—a Volume!"

But no one remembers this work like they do his others.  In the same volume Cowper also printed "The Diverting History of John Gilpin", a notable piece of comic verse. But this is of course just jolly poetry.

Cowper and Mary Unwin moved to Weston in 1786 and in 1795 Cowper moved with Mary to Norfolk. But Mary Unwin died in 1796, plunging Cowper into a gloom from which he never fully recovered.

During this time he wrote one powerful and bleak poem "The Castaway".

Cowper was 'seized with dropsy' in the spring of 1800, which means his heart was probably failing as today we call this oedema,  and died the same year aged 69.