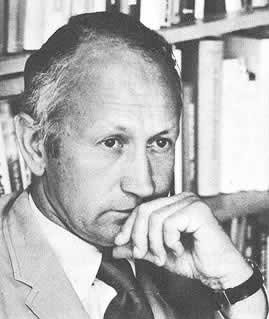 He worked as a journalist and editor for the New York Evening Post, Current History as a book critic, and the Saturday Review of Literature (later renamed Saturday Review), where he was editor-in-chief until 1972. His philosophy toward his work can be summarised by his instructions to his staff “not just to appraise literature, but to try to serve it, nurture it, safeguard it.” Cousins believed that “there is a need for writers who can restore to writing its powerful tradition of leadership in crisis.”

Cousins was a tireless advocate of human rights and 'good' causes, such as nuclear disarmament and world peace, which he promoted through his writing in Saturday Review. When the United States dropped the atomic bomb in Hiroshima, Cousins wrote an article for the Saturday review entitled “The Modern Man is Obsolete,” in which he expressed “the deepest guilt” over the bomb’s use and discussed the social and political implications of both the atomic bomb and nuclear power.

The response was considerable, and the article was reprinted in newspapers around the country. In the 1950s, Cousins played a prominent role in bringing the 'Hiroshima Maidens', a group of twenty-five Hibakusha, to the United States for medical treatment.

In the 1960s, he began the American-Soviet Dartmouth Conferences for peace.  Cousins also wrote a collection of non-fiction books on the same subjects, such as the 1953 Who Speaks for Man?  which advocated a World Federation and nuclear disarmament. He also served as president of the World Federalist Association and chairman of the Committee for Sane Nuclear Policy, which in the 1950s, warned that the world was bound for a nuclear holocaust, if the threat of the nuclear arms race was not stopped. 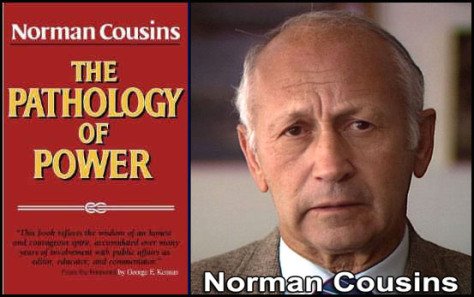 Cousins became an unofficial ambassador in the 1960s, and his facilitating communication between the Holy See, the Kremlin and the White House helped lead to the Soviet-American test ban treaty, for which he was thanked by President John F. Kennedy and Pope John XXIII, the latter of which awarded him his personal medallion. Cousins was also awarded the Eleanor Roosevelt Peace Award in 1963, the Family Man of the Year Award in 1968, the United Nations Peace Medal in 1971, and the Niwano Peace Prize in 1990. He also served on the board of trustees for Science Service, now known as Society for Science & the Public, from 1972-1975. His proudest moment , however, was when Albert Einstein called him to Princeton University to discuss issues of nuclear disarmament and world federalism.

So he was quite a special man. But what is of especial interest for us on this website is that Cousins also served as Adjunct Professor of Medical Humanities for the School of Medicine at the University of California, Los Angeles.  Whilst there, he did research on the biochemistry of human emotions, which he believed were the key to human beings’ success in fighting illness. In effect he believed that high emotion was a function that was linked to illness – not disease which tends to be linked to toxins, viruses and bacteria, but illness such as heart disease. 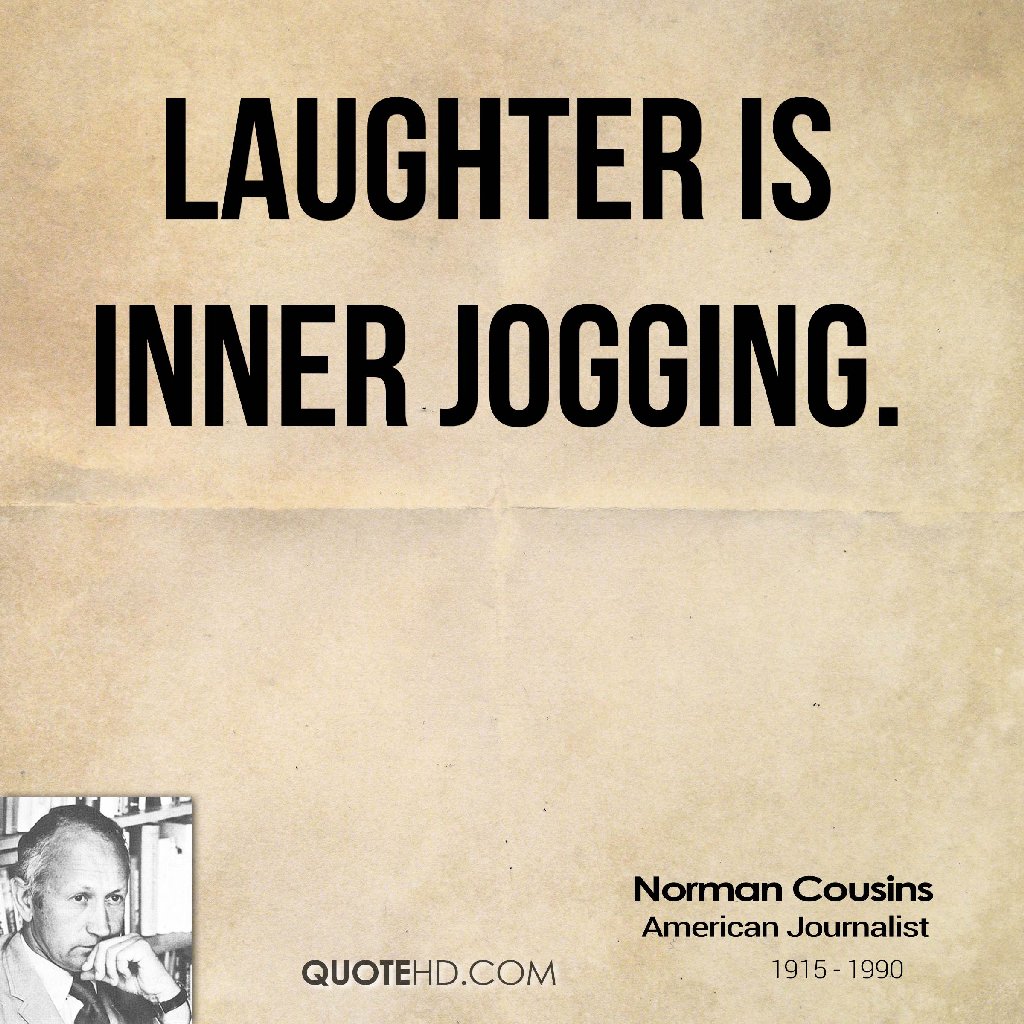 The irony was that his long battles with government and the high emotional stress he was under gave him heart disease, so he became living [barely living] proof of this fact.

His solution? Well, he did not meditate or go on long retreat holidays or teach himself relaxation or sex magick techniques  - although he had a very happy family life and four daughters who were his pride and joy, so this helped him.  He was also a strong advocate of love as a healer.

Instead he used very large doses of Vitamin C [which probably had no direct effect, but helped to boost his immune system] and trained himself [sic] to laugh.

As someone who laughs quite a lot [mostly at my own jokes], I found it incomprehensible that anyone would have to teach themselves how to laugh, but Cousins was clearly an intense serious man and indeed he had to be made to laugh – to learn how to relax through laughter. 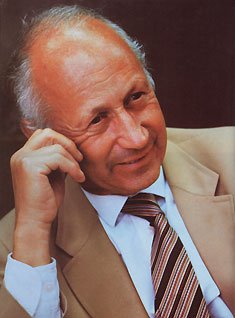 Late in life Cousins was diagnosed with a form of arthritis which caused him immense pain. Now I have arthritis and I have heart disease and I think they are linked and it may be the medication that is the culprit – statins for example are known to attack the muscles - and many people [my cousin being one – so this may run in families] have been reduced almost to a wheelchair by taking statins – when my cousin stopped taking the statins, the 'arthritis' stopped.

Unfortunately those with high cholesterol are told to take them OR ELSE. The implication being that there will be no treatment if you stop. 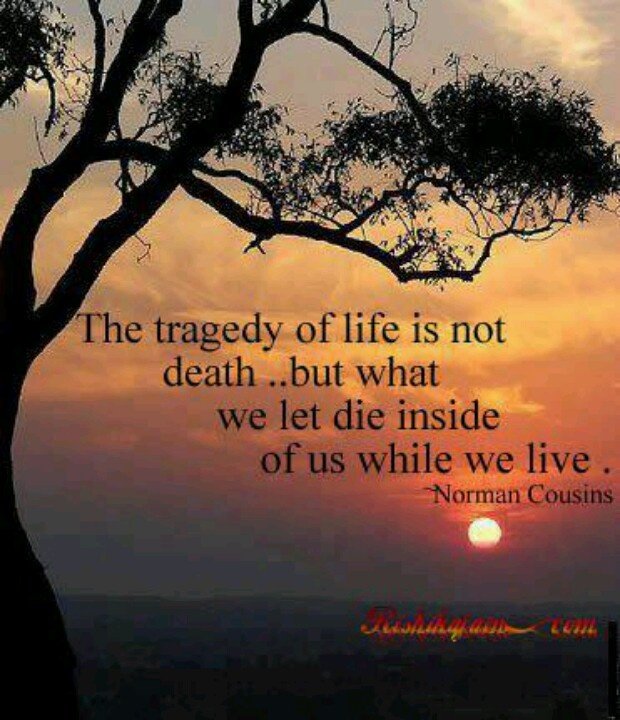 Either way, poor Norman Cousins also suffered inordinate amounts of pain. His struggle with this illness is detailed in the book and movie Anatomy of an Illness.

Cousins received the Albert Schweitzer Prize in 1990. He died of heart failure on November 30, 1990, in Los Angeles, California many years after his heart disease was diagnosed - so his system worked. He is buried at the Mt. Lebanon Jewish Cemetery in New Jersey, alongside his wife and parents. 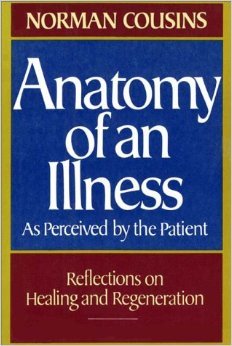