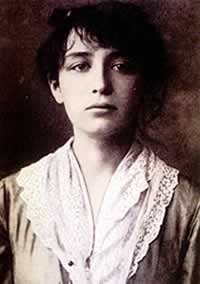 Fascinated with stone as a child, as a young woman she studied at the Académie Colarossi with sculptor Alfred Boucher. (At the time, the École des Beaux-Arts barred women from enrolling to study.)

Alfred Boucher became her mentor and provided inspiration and encouragement to Claudel.

Before moving to Florence and after having taught Claudel and others for over three years, Boucher asked Auguste Rodin to take over the instruction of his pupils. This is how Rodin and Claudel met and their tumultuous and passionate relationship started.

Around 1884, she started working in Rodin's workshop. Claudel became a source of inspiration, his model, his confidante and lover. She never lived with Rodin, who was reluctant to end his 20-year relationship with Rose Beuret.

Knowledge of the affair agitated her family; as a consequence, she left the family house. In 1892, after an unwanted abortion, Claudel ended the intimate aspect of her relationship with Rodin, although they saw each other regularly until 1898.

After 1905, Claudel appeared to be mentally ill. She destroyed many of her statues, disappeared for long periods of time, and exhibited signs of paranoia.  She was diagnosed as having schizophrenia.   She accused Rodin of stealing her ideas and of leading a conspiracy to kill her.  She lived secluded in her workshop.

On 10 March 1913 at the initiative of her brother, she was admitted to the psychiatric hospital of Ville-Évrard in Neuilly-sur-Marne. The form read that she had been "voluntarily" committed, although her admission was signed by a doctor and her brother. Doctors tried to convince the family that she need not be in the institution, but still they kept her there.

On 7 September 1914 Camille was transferred to the Montdevergues Asylum, at Montfavet, near Avignon. Her certificate of admittance reported that she suffered "from a systematic persecution delirium”.

For a while, the press accused her family of committing a sculptor of genius. Her mother forbade her to receive mail from anyone other than her brother. The hospital staff regularly proposed to her family that Claudel be released, but her mother adamantly refused each time. On 1 June 1920, physician Dr. Brunet sent a letter advising her mother to try to reintegrate her daughter into the family environment. Nothing came of this.

Camille Claudel died on 19 October 1943, after having lived 30 years in the asylum at Montfavet, and without a visit from her mother or sister (her mother died on 20 June 1929). Her body was interred in the cemetery of Monfavet. No one from the family attended the ceremony (only a few members from the hospital staff). 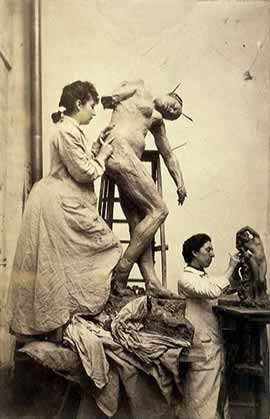 Grief and shock of the level she experienced especially in someone artistic and sensitive can result in symptoms that resemble schizophrenia and may cause such permanent damage that indeed without the support of a ‘safe house’ environment, a person’s condition only deteriorates more.  I think this is what happened to Camille.

Mirbeau described her as "A revolt against nature: a woman genius".

Her early work is similar to Rodin's in spirit, but shows an imagination and lyricism quite her own, particularly in the famous Bronze Waltz (1893) , The Mature Age (1900) and her onyx and bronze small-scale Wave (1897).