Christina the Astonishing (1150 – 24 July 1224), also known as Christina Mirabilis, was a Christian woman born in Brustem (near Sint-Truiden, Belgium). Christina receives attention today as much for the strange descriptions of her miracles as for her faith. Her memorial day is 24 July.

Born a peasant, Christina was orphaned at age 15. She is said to have suffered a massive seizure when she was in her early 20s. According to the story, her condition was so severe that witnesses assumed she had died.

A funeral was held, but during the service, she "arose full of vigor, stupefying with amazement the whole city of Sint-Truiden, which had witnessed this wonder. "

She then levitated up to the rafters.

Then "[t]he astonishment increased when they learned from her own mouth what had happened to her after her death."  In effect, Christina the Astonishing had had a near death experience.

She related that she had witnessed Heaven, Hell and Purgatory. She said, "As soon as my soul was separated from my body it was received by angels who conducted it to a very gloomy place, entirely filled with souls" where the torments there that they endured "appeared so excessive" that it was "impossible to give an idea of their rigor." 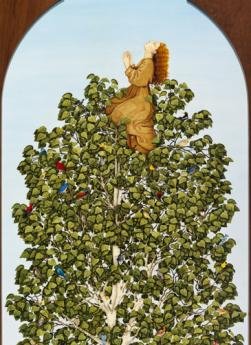 So shaken was she by her vision that she renounced all the comforts of life, reducing herself to extreme destitution, living 'without home or hearth', in the belief she was 'doing God's will'.  Not content with privations she 'eagerly sought all that could cause her suffering'.

Elizabeth Spearing from the Introduction to Medieval writings on female spirituality
Despite her extraordinary resurrection during her own funeral, her sisters and the local community saw her subsequent behaviour as madness and she was treated as the insane were treated; she was chained up and neglected. 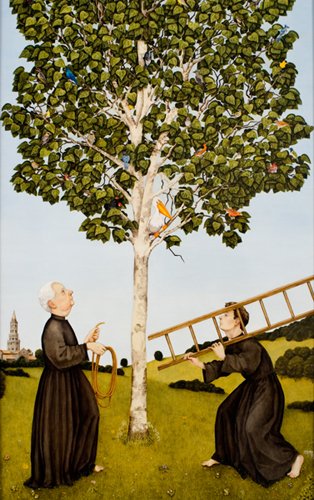 One of the rather unfortunate aspects about Christina’s life is that it was chronicled by her contemporaries, especially Thomas of Cantimpré, then a canon regular who was a noted professor of theology, and Cardinal Jacques de Vitry.  There is just the feeling that they took great liberties with the truth in chronicling what happened to her.

I think her experiences were genuine, and they didn’t need the embellishment these two added, but it leaves you with no real idea what actually happened and what not.

But she certainly began a process of pointless self-mutilation almost unequalled in the Christian church.

She would throw herself into burning furnaces and there suffered great tortures for extended times, uttering frightful cries, yet coming forth with no sign of burns upon her. In winter she would plunge into the frozen Meuse River for hours and even days and weeks at a time, all the while praying to God and imploring God's mercy. She sometimes allowed herself to be carried by the currents downriver to a mill where the wheel "whirled her round in a manner frightful to behold," yet she never suffered any dislocations or broken bones. She was chased by dogs which bit and tore her flesh. She would run from them into thickets of thorns, and, though covered in blood, she would return with no wound or scar. 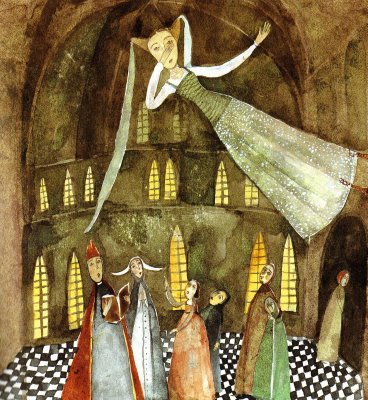 Christina died at the Dominican Monastery of Saint Catherine in Sint-Truiden, of natural causes, aged 74. The prioress there later testified that, despite her behavior, Christina was actually quite a helpful soul and did fulfill her duties.  Veneration of Christina has never been formally approved by the Catholic Church, but there still remains ‘a strong devotion to her in her native region of Limburg’.

Elizabeth Spearing from the Introduction to Medieval writings on female spirituality

A twentieth century psychiatrist might have called Christina [the Astonishing] psychotic or schizophrenic.  Her bizarre behaviour and Thomas’s interpretation of it certainly proved interesting in the Middle Ages as it survives in a number of manuscripts in Latin, Dutch and English.  Though astonishing, Christina was not as unusual as one might suppose.  There seem to have been a number of people ‘possessed by the spirit’ in some way and even those possessed by a devil could be seen as having supernatural authority…
Christine fled from the presence of men, climbed onto high things like a bird and stayed in the water for a long time like a fish.  So they prayed that God would make her more like other people – and this was successful, for after plunging into a baptismal font she became calmer more socialised and less embarrassing….
[In time] like other ‘holy’ women, Christina became a preacher and a spiritual advisor.  She even exerted considerable influence over Count Lewis of Looz, who treated her as a priest when he made his deathbed confession to her.  A woman who three to four centuries later would have been burned as a witch, who nowadays might have been on medication, in an institution, or even living rough; in the Middle Ages moved from cows to castle, an honoured and valued member of the community

The  Life of Christina the Astonishing, by Thomas de Cantimpré