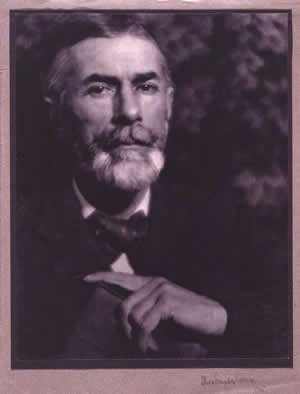 Edward Carpenter (29 August 1844 – 28 June 1929) was an English poet, philosopher and anthologist. A leading figure in late 19th- and early 20th-century Britain, he was instrumental in the foundation of the Fabian Society and the Labour Party.

As a philosopher he is particularly known for his publication of Civilisation, Its Cause and Cure in which he proposes that civilisations rarely last more than a thousand years before collapsing. His 'cure' was a closer association with the land and greater spiritual development of our inner nature. Carpenter developed a philosophy which argued for a radical simplification of life, focusing on the need for the open air, rational dress and a healthy diet based on "fruits, nuts, tubers, grains, eggs, etc... and milk in its various forms".

Carpenter was gay and an early advocate of sexual freedoms. His early private life was however, marked with tragedy after tragedy. After gaining a place at Trinity Hall, Cambridge, 'he began to explore his feelings for men'. He formed a 'close friendship' with Edward Anthony Beck. Beck eventually ended their friendship, causing Carpenter great emotional heartache. Carpenter's sense of rejection mirrored his general unease with his sexuality. He had a succession of relationships with men over these years, but none provided him with a stable partnership. 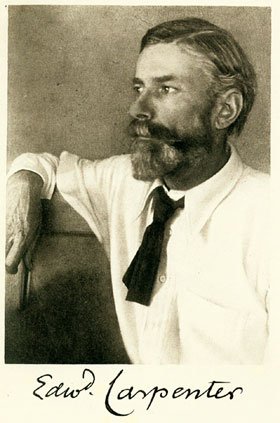 In the 1880s, Carpenter developed an intellectual passion for Hindu mysticism and Indian philosophy. In 1890 he travelled to Ceylon and India to spend time with the Hindu teacher Gnani. The experience had a profound effect on his social and political thought. Carpenter began to believe that Socialism should not only concern itself with man's outward economic conditions, but also effect a profound change in human consciousness. In this new stage of society, Carpenter argued that mankind would return to a primordial state of simple joy:
"The meaning of the old religions will come back to him. On the high tops once more gathering he will celebrate with naked dances the glory of the human form and the great processions of the stars, or greet the bright horn of the young moon."
He began a number of campaigns against air pollution, promoting vegetarianism and opposing vivisection.

Edward's father, Charles Carpenter, died in 1882, leaving his son a considerable fortune. Up to that point, Carpenter had had a succession of lecturing and teaching jobs, ending up eventually in Sheffield. This inheritance enabled Carpenter to leave his lecturing job and take up market gardening in Millthorpe, near Barlow, Derbyshire. By this time he had fully acknowledged his sexual orientation, and this, along with his adoption of a life closer to nature, produced a period of artistic creativity.

Carpenter wrote, in a "kind of wooden sentinel box" in his garden, the poems that would become his book of verse, Towards Democracy, which was heavily influenced by Eastern spirituality and Carpenter's long reading of the writings of Walt Whitman.

So, it was not angst that inspired Carpenter's poetry, but nature and the reduction of threats. To this can be added one more activity - love. 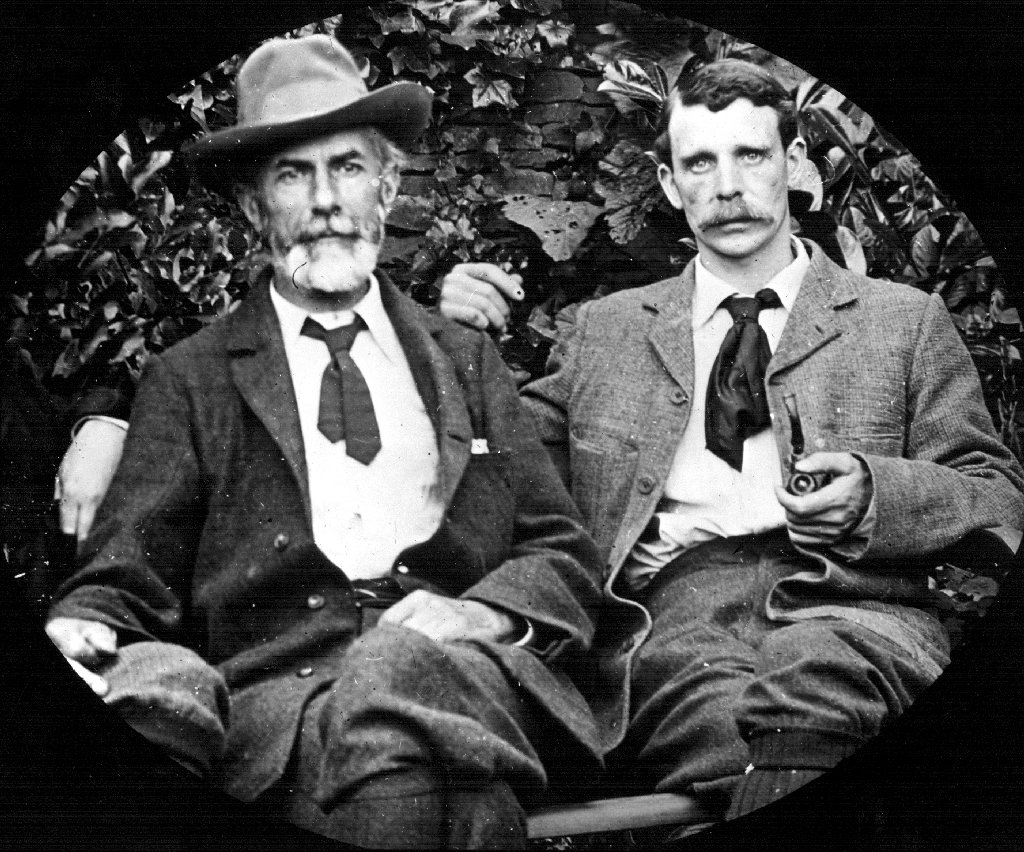 On his return from India in 1891, Edward met George Merrill, a working class man also from Sheffield, and the two men struck up a relationship. They eventually moved in together in 1898. Merrill had been raised in the slums of Sheffield and had no formal education. Their relationship endured and they remained partners for the rest of their lives.

"Eros is a great leveller. Perhaps the true Democracy rests, more firmly than anywhere else, on a sentiment which easily passes the bounds of class and caste, and unites in the closest affection the most estranged ranks of society. "
In January 1928, Merrill died suddenly, leaving Carpenter devastated. G Lowes Dickinson recalled

"Edward's grief when that occurred was overwhelming. I remember him walking on my arm to the cemetery at Guildford where they had buried George a few days before, and where he himself was to lie a year or so later. It was a day of pouring rain, and we stood beside the grave, while Carpenter [cried] again and again, 'They have put him away in the cold ground'."

In May 1928, Carpenter suffered a paralytic stroke. He lived another 13 months before he died on Friday 28 June 1929. His own epitaph reads

"Do not think too much of the dead husk of your friend, or mourn too much over it, but send your thoughts out towards the real soul or self which has escaped — to reach it. For so, surely you will cast a light of gladness upon his onward journey, and contribute your part towards the building of that kingdom of love which links our earth to heaven."