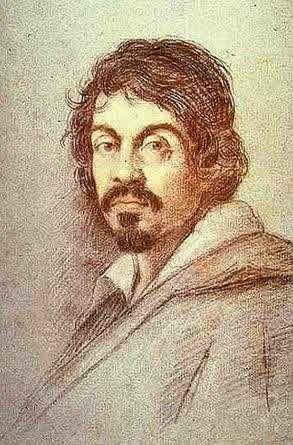 Michelangelo Merisi da Caravaggio (1571 – 1610) was an innovative Italian artist . His paintings combine realism with a dramatic use of lighting, novel composition and considerable use of symbolism.  Some of the angles of the 'shots' he uses are totally novel for the time.  His paintings also show  meticulous attention to detail – pure perception – from the marks on a piece of fruit to the muscles of a person's body.

His technique of painting was also quite new for the time.  He did not use drawings or studies, but  worked at great speed, using live models, scoring basic guides directly onto the canvas with the end of the brush handle.  His models were his friends and street urchins.  He clearly also  knew a lot of prostitutes as many appear in his paintings. His female models include Fillide Melandroni, Anna Bianchini, and Maddalena Antognetti  all well-known prostitutes, who appear as female religious figures including the Virgin and various saints.

His paintings are hugely theatrical in their depictions.  They are full of emotional intensity and drama.   The Fortune Teller, for example, shows Mario being cheated by a gypsy girl. The Cardsharps — showing another naïve youth of privilege falling the victim of card cheats — is even more novel.  His last picture, The Martyrdom of Saint Ursula shows Saint Ursula  caught in a moment of highest action and drama, as the arrow fired by the king of the Huns strikes her in the breast.  Ultimately it is theatre captured on canvas.

Opinion among Caravaggio's artist peers was polarized. Some denounced him for various perceived failings,  but for the most part he was hailed as a great artistic visionary:

"The painters then in Rome were greatly taken by this novelty, and the young ones particularly gathered around him, praised him as the unique imitator of nature, and looked on his work as miracles."

He was naturally talented, but recent study has identified that he, along with numerous other painters and artists suffered from lead poisoning from the paints he was constantly exposed to, as such his brilliance could easily have been given that extra inspirational boost from the damage the lead caused.  It certainly affected his character.   Lead poisoning seems to result in aggressive behaviour and Caravaggio was generally regarded as emotional, argumentative, and volatile.  He was jailed on several occasions, vandalized his own apartment, and ultimately had a death warrant issued for him by the Pope.

Caravaggio was deliberately confrontational in everything he did on an ongoing basis.  One cardinal's secretary wrote: "In this painting there are but vulgarity, sacrilege, impiousness and disgust...One would say it is a work made by a painter that can paint well, but of a dark spirit, and who has been for a lot of time far from .... any good thought..." The Death of the Virgin was rejected by the Carmelites in 1606 because Caravaggio had used a well-known prostitute as his model for the Virgin.

Caravaggio started his career in Milan, but left Milan for Rome in mid-1592, in flight after "certain quarrels" and the wounding of a police officer. He arrived in Rome "naked and extremely needy ... without fixed address and without provision ... short of money." A few months later he was performing hack-work for the highly successful Giuseppe Cesari, Pope Clement VIII's favourite artist, "painting flowers and fruit" in his factory-like workshop.  He was frequently ill, a serious illness  ended his employment with Cesari.

An early published notice on him, dating from 1604 and describing his lifestyle three years previously, tells how "after a fortnight's work he will swagger about for a month or two with a sword at his side and a servant following him, from one ball-court to the next, ever ready to engage in a fight or an argument, so that it is most awkward to get along with him."

Caravaggio  was notorious for brawling, even in a time and place when such behavior was commonplace, and the transcripts of his police records and trial proceedings fill several pages. On 29 May 1606, he killed, possibly unintentionally, a young man named Ranuccio Tomassoni from Terni (Umbria). Previously his high-placed patrons had protected him from the consequences of his escapades, but this time they could do nothing. Caravaggio, outlawed, fled to Naples. There, outside the jurisdiction of the Roman authorities and protected by the Colonna family, the most famous painter in Rome became the most famous in Naples.

Despite his success in Naples, after only a few months in the city Caravaggio left for Malta, the headquarters of the Knights of Malta. He enjoyed considerable success there, yet by late August 1608 he was arrested and imprisoned, the result of yet another brawl, during which the door of a house was battered down and a knight seriously wounded. He was imprisoned by the knights, but managed to escape.

Caravaggio made his way to Sicily where he met his old friend Mario Minniti. Together they set off on a tour from Syracuse to Messina and on to the island capital, Palermo.  Contemporary reports depict a man whose behaviour was becoming increasingly bizarre, sleeping fully armed and in his clothes, ripping up a painting at a slight word of criticism, mocking the local painters.

After only nine months in Sicily, Caravaggio returned to Naples. In Naples an attempt was made on his life. At first it was reported in Rome that the "famous artist" Caravaggio was dead, but then it was learned that he was alive, but seriously disfigured in the face.   But on his way from Naples to Rome Caravaggio died, it was said of fever, or murdered.

Caravaggio might have died of the lead poisoning that probably caused much of his irrational and violent behavior.  He was just 39 years old.

During all this time of conflict and strife, he painted prodigiously and painted works of total genius.

Caravaggio shows all the hallmarks of one inspired.  He never established a workshop and thus had no school to spread his techniques. Nor did he ever 'set out his underlying philosophical approach to art'.  Inspired artists never do, because they do not have a philosophy, nor can they teach what they do.  Only about 80 paintings by Caravaggio have survived.

But the price he paid to gain that inspiration was indeed high, eventually of course he paid with his life.

Wikigallery collection of his paintings and sculptures.