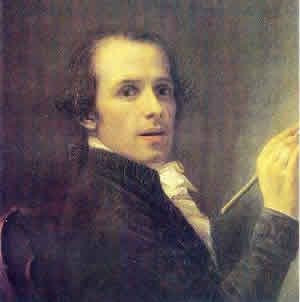 Antonio Canova (1757 – 1822) was an Italian sculptor from the Republic of Venice who became famous for his marble sculptures that delicately rendered nude flesh. The epitome of the neoclassical style, his work marked a return to classical refinement after the theatrical excesses of Baroque sculpture.

Antonio Canova was brought up by his grandparents.  His father died when he was three and his mother remarried.  His father and grandfather followed the occupation of stone-cutters and it was from his grandfather that he learnt sculpture, from an early age his grandfather allowed him to use his workshop and by the age of nine he had already produced two small shrines of Carrara marble.

One of his grandfather's clients was the patrician family Falier of Venice, who became his patron.  Falier placed  Canova, still only 13, under Bernardi, [also known as Giuseppe Torretto], a sculptor of considerable eminence.  He moved to Venice on the death of Torretto and was  placed under a nephew of Torretto. With this instructor he continued about a year, until he was about 16.

His first work commissioned by his patron on his own account, was Orpheus and Eurydice.  To complete it, he studied nature, anatomy, performers in the theatre, archaeology and history.  Other works followed including Daedalus and Icarus.   He moved to Rome when he was 24 and used the move to study the antiquities there.  The work which first established his fame at Rome was Theseus Vanquishing the Minotaur, now in the collections of the Victoria & Albert Museum, in London.

By now I think you should be getting a feel for what Canova was – a workaholic – a perfectionist who had worked and sculpted from when he was small.  He never knew childhood, all he knew was sculpture and he worked and worked and worked.  Sculpture is not like painting, it is extremely hard physical work.  And marble, although a beautiful stone to work with is not easy to carve into the soft gentle and delicate sculptures that he produced.

It was not lack of money that drove him, he received continual monetary support from patrons, but he just seemed driven.  He must have worked sometimes day and night - Psyche, with a butterfly, which is placed on the left hand, and held by the wings with the right; two sculptures of Cupid with his bride; in the one they are standing, in the other recumbent; numerous works in the years 1795–1797,  including the  Parting of Venus and Adonis, not to mention the odd tomb or two or three....

“The events which marked the life of the artist during the first fifteen years of the period in which he was engaged on the above-mentioned works scarcely merit notice. His mind was entirely absorbed in the labors of his studio, and, with the exception of his journeys to Paris, one to Vienna, and a few short intervals of absence in Florence and other parts of Italy, he never quit Rome. In his own words, "his statues were the sole proofs of his civil existence."

He even considered sculpting a colossal statue of Religion, a statue which he would have financed, the marble was procured,  when “the jealousy of churchmen as to the site, or some other cause, deprived the country of the projected work”. In the meantime the vast expenditure exhausted his resources, and “compelled him to labor with unceasing assiduity notwithstanding age and disease”.

During this period, he executed or finished some of his most striking works. Amongst these were the group Mars and Venus, the colossal figure of Pius VI, the Pietà, the St John, the recumbent Magdalen. The last sculpture he completed was a colossal bust of his friend, the Count Cicognara.

In May 1822 he paid a visit to Naples, to superintend the construction of wax moulds for an equestrian statue of the  Bourbon king Ferdinand VII. This journey injured his health, but he rallied again on his return to Rome. Towards the latter end of the year he paid his annual visit to the place of his birth, when he experienced a relapse. He proceeded to Venice, and died there at the age of nearly sixty-five.

He died from “a disease  which had affected him from an early age, caused by the continual use of carving-tools, producing a depression of the ribs”. Overwork and physical exhaustion.

And it is worth adding he was left handed.  The self portrait made using a mirror shows this well.