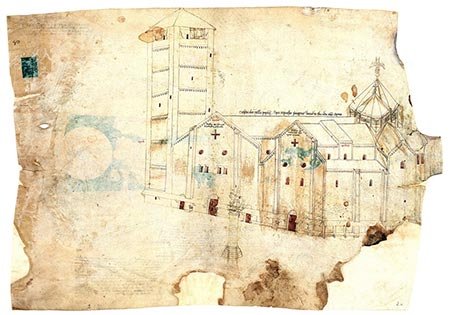 Opicinus de Canistris was an Italian priest, writer and artist.

On 31 March 1334 Opicinus suffered a serious illness in which he became comatose for nearly two weeks. When he finally recovered he discovered that much of his memory was gone, that he could not speak and that his right hand was useless. We do not know exactly what it was that Opicinus suffered from, but the symptoms have all the hallmarks of a stroke.  He writes that,

“On March 31, 1334 I fell sick. I received the sacraments and was near death through the first third of April. When I came to I found my limbs out of action…I had forgotten everything and could not even remember how the world looked outside of our dormitory…In the consequences of the disease I was mute, my right hand was lame and I had lost in a miraculous way a great deal of my literal memory.” 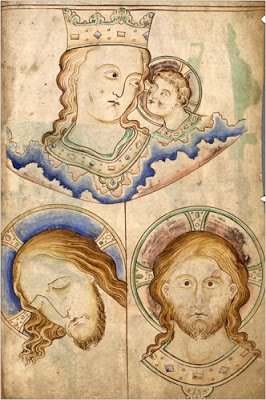 On August 15th he had his first vision.

“In the night of August 15, I saw a dream of the Virgin with the Child in her lap...and through her merits she has given me back not the littera (knowledge) but a double spirit. Since February 1, 1335, I began to retire, bit by bit, from the work in our office because of the weakness of my hand.”

Opicinus also started to be able to draw pictures and also to paint subjects which were, as it were, out of his control.

“In a spiritual work, however, this same hand proved stronger than before: since then it has drawn all these pictures without any human help. At present my lost literal knowledge is replaced twofold by spiritual knowledge; my right hand is weak in worldly work, but strong in spiritual endeavors.”

The “pictures” he refers to are a complex series of maps and schematic diagrams in two manuscripts currently held at the Vatican library, Palatinus 1993 and Vaticanus 6435. These drawings were a means for Opicinus to chart the spiritual realities that he believed were the underpinnings of the physical world. 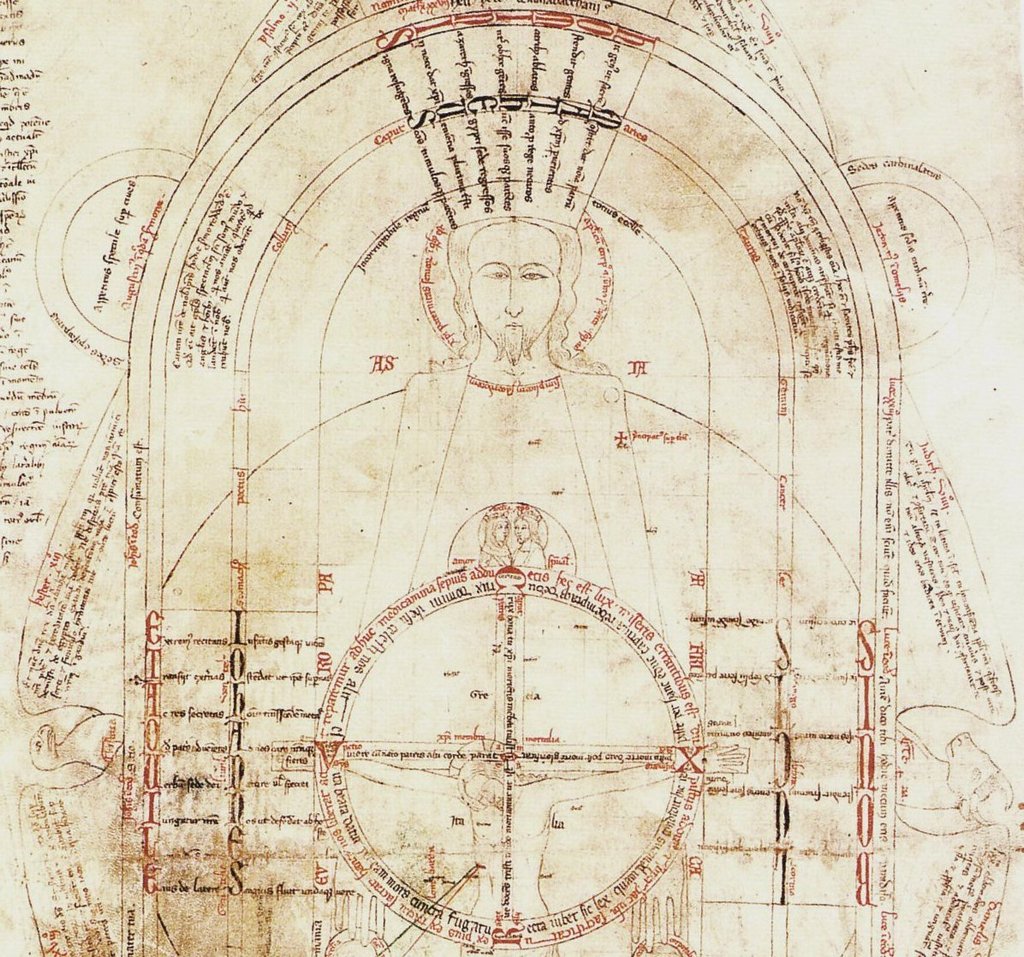 This detailed view shows the crown chakra, the levels and layers - in effect man is a reflection in spiritual terms of the
universe itself, the cross and the Egg

Opicinus wrote this between June and November 1337 and subsequently inserted addita (the last in December 1352). This manuscript, which was only identified on the eve of the 2nd World War, was recently fully published and translated by the medievalist Muriel Laharie.  Unfortunately it is accompanied by comments by a psychiatrist - Guy Roux – but these can be ignored.

The Vaticanus comes in the form of a paper codex with 87 folios, with only written text in the first half, text and drawings (often map based) in the second half.

All the maps are spiritual maps – maps of the layout of the cosmos, although they appear to be of the Mediterranean area, as Wikipedia says “precise and curiously organised” – which of course they would be because they are not maps of the physical.

Opicinus began this work in 1336, as a sequel to the vaticanus. It was identified in 1913 (therefore before the codex).  It has 52 large colour drawings on parchment and is covered with notes, it relies much less on a cartographic format. The drawings are extremely symbolic, using human figures covered in circles and ellipses. Opicinus also included a plethora of biblical quotations, calendars, astrological charts and medical imagery.

The observations provide some examples and also the symbolism used.