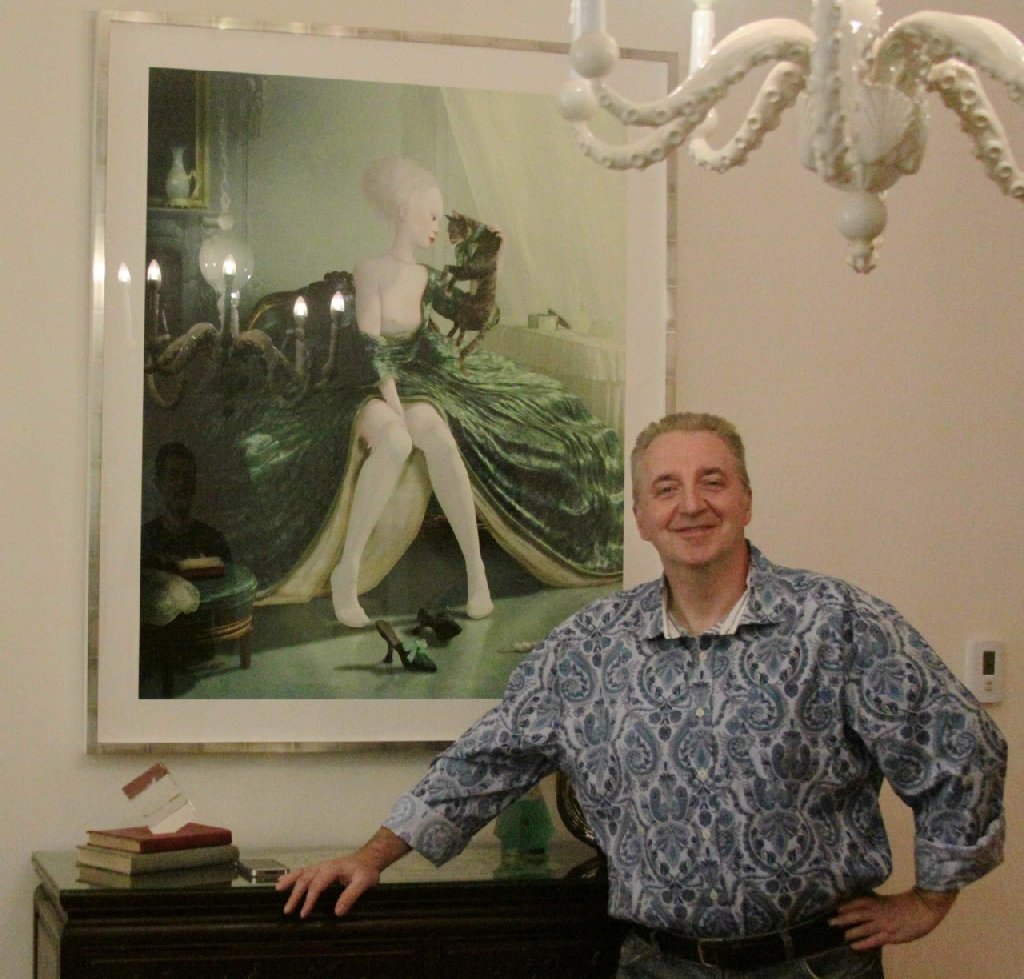 Ray Caesar is an artist, born in London, England on October 26 1958, the youngest of four.

The family moved to Toronto, Canada when he was still a child.

Caesar has described his childhood as ‘traumatic’ and although he drew and painted as a child, he only started to paint full time after his mother and sister died, as a form of therapy.

Ray studied architecture at the Ontario College of Art, then spent several years working at the Art and Photography Department of a children’s hospital.  He studied computer animation and his pictures are created using three dimensional modeling software called Maya.  He worked in many fields over the years, medical art facilities, digital service bureaus, casino computer game companies, eventually working at computer modeling, digital animation and visual effects for television and film.   But what finally persuaded him to become a full-time artist was a vision he had, of his dead mother – see the observation. Ray lives in ‘a brick house with my wonderful wife Jane and a dog called Bonnie’. 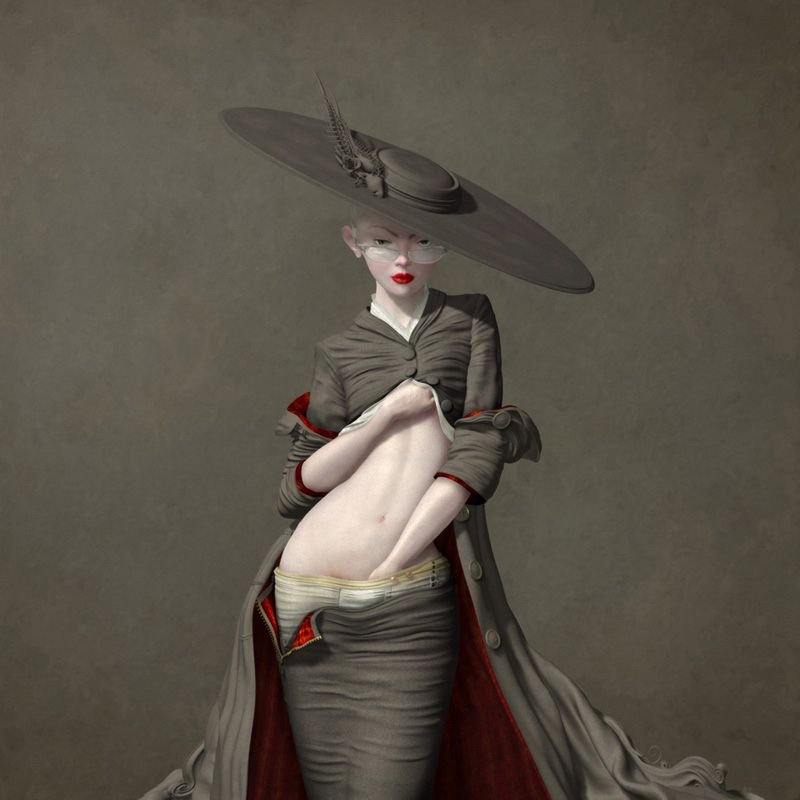 Ray Caesar:  Making pictures has always been a way for me to communicate from my subconscious to my conscious mind – I did this as a child without even realizing what I was doing.

It was also a way to escape from a difficult situation and create a world that was a happier and kinder place, a kind of sanctuary. I found over the years that any difficulty was alleviated by drawing the situation and dissociating the experience to paper.

In many ways, it is like writing a visual diary and once we have put our thoughts and feelings to paper or to a hard drive, we can calm our minds and then we are able to cope. I believe the mind uses a kind of external memory to displace difficulty and combined with a form of creative energy, the dissociated residue of images or words becomes “Art”.  We do the same with “Music” and “Movement” and any form of creative expression, as I believe it is in our nature to turn the worst of things into the best of things. 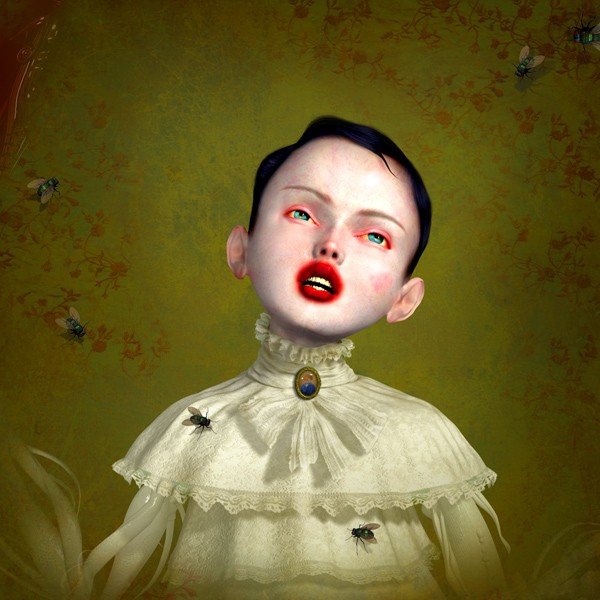 My work contains aspects of a story that unfolds and has a great deal to do with a process of intense psychotherapy and the years of dealing with dissociative identity disorder (a form of multiple personalities) and trauma I went through in childhood. … My work seems to keep on the regular themes of “Hunting Back Innocence” and “Revelations of Light” and the painful process of “Self Examination” and hidden voices calling like sirens in the night.

Premonitions and the worlds of pleasure and pain and ugliness and beauty and humiliation and dignity. For many people what I do is art, but for me the pictures are a communication from my subconscious to my conscious mind. That being said, I love and enjoy what I do and on one level it’s always simply been about sitting in the sun and  making pretty pictures. 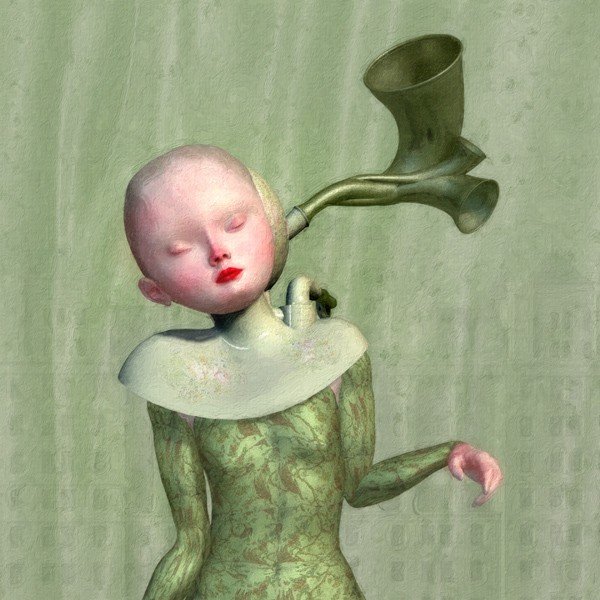 All my paintings are of a separate reality, with distinct characters and settings. Some characters are girls, some are boys, and some have mixed genders. We all have some male and female points and counterpoints in us such as the anima and animus. The same characters and environments often make appearances throughout my work. Every piece is also partly a self-reflection of my mind performed by my little cast of characters. When creating a picture, I approach the process like I am making a perfume, putting in a mixture of questionable ingredients. I put in elements of humor, horror, sexuality, darkness, kindness and joy. Some pieces also have a hunter/prey component, which expresses an emotion of  attempting to recapture a lost innocence, or of the power that a prey has over the hunter.

There is of course symbolism – for example, tentacles being from creatures of the deep are ways of expressing things from the subconscious, those things beneath the mind’s awareness. Tentacles and other deformities also are partly inspired by my father who had severely deformed feet.

Part of my work comes from a form of disassociation, stemming from a part of my psyche that isn’t always accessible, and isn’t always rational. It is not the sort of thing that can be improved with outside comment. It’s not the picture or image I am concerned with, it’s the feeling and emotion that lies below the surface of the picture.

There are two great endeavors in this world – healing and creating, and they work best when combined.

I have provided one observation of Ray's as a separate entry, but his pictures so graphically portray a kind of other reality, that I have used them in the description for HPV.  The reason is that there are some of his paintings that capture perfectly the sort of devastation the virus can do to girls and the beautiful.  The virus does indeed send them to the Light.

Ray Caesar’s art work is available at various galleries around the world and is managed by Toronto’s Gallery House – contact Gallery House to locate his next exhibition and find out which gallery is closest to you.  He also has his own website.