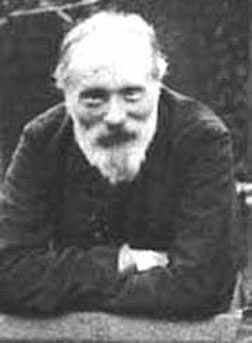 Sir Edward Coley Burne-Jones, 1st Baronet, A.R.A. (28 August 1833 – 17 June 1898) was a British artist and designer closely associated with the later phase of the Pre-Raphaelite movement.  In addition to painting, Burne-Jones worked in a variety of crafts; including designing ceramic tiles, jewellery, tapestries, mosaics and book illustration, most famously designing woodcuts for the Kelmscott Press's Chaucer in 1896.  He designed a number of very beautiful stained glass windows.

He was a great friend of William Morris.  In 1861, when William Morris founded the decorative arts firm of Morris, Marshall, Faulkner & Co, Burne-Jones was a partner along with  Dante Gabriel Rossetti, Ford Madox Brown and Philip Webb. 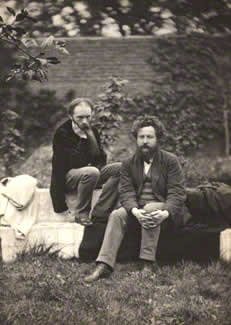 William Morris and Burne-Jones, together with a small group of Jones' friends  formed a very close and intimate society, which they called "The Brotherhood". Burne-Jones had intended to become a church minister, but under Rossetti's influence both he and Morris decided to become artists, and Burne-Jones left college before taking a degree to pursue a career in art. The Brotherhood has a special meaning spiritually, so we know from this that this group were already involved in a spiritual life.

Burne-Jones' early paintings show the heavy inspiration of Dante Gabriel Rossetti, but by the 1860s Burne-Jones was discovering his own artistic "voice". In 1877, he was persuaded to show eight oil paintings at the Grosvenor Gallery (a new rival to the Royal Academy) and he was taken up as a herald and star of the new Aesthetic Movement. 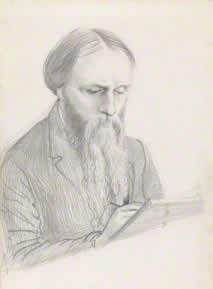 Aestheticism was based on the principle that art should be valued as an object of beauty engendering a sensual response, rather than for the story or moral implicit in the subject matter. So here we have one of the major influences in Burne-Jones' life – Beauty, Art and Music.

I mean by a picture a beautiful, romantic dream of something that never was, never will be - in a light better than any light that ever shone - in a land no one can define or remember, only desire - and the forms divinely beautiful - and then I wake up, with the waking of Brynhild.

So here we have the very essence of spiritual experience at its most beautiful.  Edward Burne-Jones had been there.

What, apart from the art  gave him this knowledge?

In 1856 Burne-Jones became engaged to Georgiana "Georgie" MacDonald (1840–1920). The couple married in 1860. Georgiana bore a son, Philip, in 1861. A second son, born in the winter of 1864 while Georgiana was gravely ill with scarlet fever, died soon after birth. So here we have Grief as a driver.  But there is more.

In 1866 Mrs Cassavetti commissioned Burne-Jones to paint her daughter, Maria Zambaco, in Cupid finding Psyche.  What followed was a consuming overwhelming and passionate  love affair,  which Burne-Jones described as the "emotional climax of his life".  The affair ended with Maria trying to commit suicide by throwing herself in Regent's Canal.

His painting The Depths of the Sea, is perhaps indicative of the way he must have felt - a painting of a mermaid carrying down with her a youth whom she has unconsciously drowned in the impetuosity of her love. 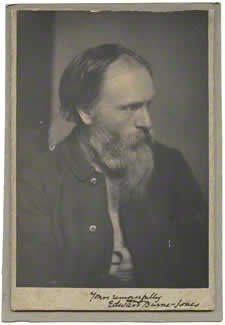 In 1870, Burne-Jones resigned his membership of the Royal society, following a controversy over his painting Phyllis and Demophoön. The features of Maria Zambaco were clearly recognizable in the barely draped Phyllis (as they are in several of Burne-Jones's finest works), and the undraped nakedness of Demophoön coupled with the suggestion of female sexual assertiveness “offended Victorian sensibilities”. Burne-Jones was asked to make a slight alteration, but instead "withdrew not only the picture from the walls, but himself from the Society."

I don't think he ever got over his love for Maria and his wife knew.

Georgiana turned for comfort to William Morris and developed 'a close friendship' with him.  Morris's wife Jane had fallen in love with Rossetti, so here we have two fellow spirits. In the end, the Burne-Joneses remained together, as did the Morrises, but Morris and Georgiana were 'close' for the rest of their lives.

So Edward Burne-Jones lost his lover and through her, he also lost his wife.

During the next seven years, 1870–1877, only two works of the painter were exhibited. These were two water-colours, shown at the Dudley Gallery in 1873, one of them being the beautiful Love among the Ruins.  I think this says it all.

But from this point on, overwhelmed with grief, he produced paintings so deeply spiritual in character that there is every reason to feel he had no need to seek spiritual experience because he was permanently there in the spiritual realm.  They are also a historical record of someone on the spiritual path, almost every stage is documented in allegorical form – including his demons!

All of the paintings are hugely symbolic – the  Briar Rose series, Laus Veneris, the Golden Stairs, the Pygmalion series,  The Mirror of Venus,  the Days of Creation, The Beguiling of Merlin,  the Chant d'Amour, Pan and Psyche,  the Annunciation, the  Wheel of Fortune ,  King Cophetua and the Beggar Maid,  The Story of Perseus. 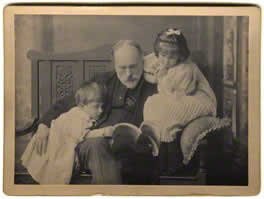 During this time he was ill.  Often this illness prevented his working, but he always resumed.  In the winter of 1892-1893, ill-health again interrupted the progress of his works, chief among which was the vast Arthur in Avalon.

“The earth, the sky, the rocks, the trees, the men and women of Burne-Jones are not those of this world. Charged with the beauty and with the strangeness of dreams, it has nothing of a dream's incoherence. Yet it is a dreamer always whose nature penetrates these works, a nature out of sympathy with struggle and strenuous action. Burne-Jones' men and women are dreamers too”.

If you would like to see the spiritual world – see his paintings.

Morris died in 1896, and the devastated Burne-Jones's health declined substantially. In 1898 he had an attack of influenza, and had apparently recovered, when he was again taken suddenly ill, and died on 17 June 1898.

“In my view, what he did for us common people was to open, as never had been opened before, magic casements of a land of faery in which he lived throughout his life ... It is in that inner world we can cherish in peace, beauty which he has left us and in which there is peace at least for ourselves. The few of us who knew him and loved him well, always keep him in our hearts, but his work will go on long after we have passed away. It may give its message in one generation to a few or in other to many more, but there it will be for ever for those who seek in their generation, for beauty and for those who can recognise and reverence a great man, and a great artist”