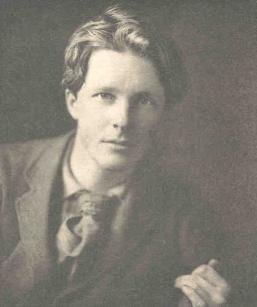 Rupert Chawner Brooke (3 August 1887 – 23 April 1915) was an English poet known for the poems and sonnets he wrote during the First World War.

Unlike many younger men of his generation he did not die in battle. He was commissioned into the Royal Naval Volunteer Reserve as a temporary Sub-Lieutenant shortly after his 27th birthday and took part in the Royal Naval Division's Antwerp expedition in October 1914.

He then sailed with the British Mediterranean Expeditionary Force on 28 February 1915 but developed sepsis from an infected mosquito bite. He died at 4:46pm on 23 April 1915 in a French hospital ship moored in a bay off the island of Skyros in the Aegean on his way to the landing at Gallipoli. 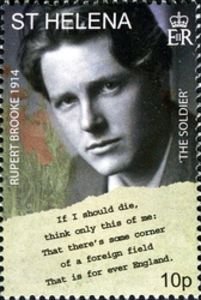 As the expeditionary force had orders to depart immediately, he was buried in an olive grove on Skyros, Greece.  The site was chosen by his close friend, William Denis Browne, who wrote of Brooke's death:

...I sat with Rupert. At 4 o’clock he became weaker, and at 4.46 he died, with the sun shining all round his cabin, and the cool sea-breeze blowing through the door and the shaded windows. No one could have wished for a quieter or a calmer end than in that lovely bay, shielded by the mountains and fragrant with sage and thyme.

Brooke was an exceptionally good looking young man and W. B. Yeats described him as "the handsomest young man in England".  The following extract from a wonderful anthology of war poems sums up his brief life

Rupert Brooke grew up in Rugby, Warwickshire. His father was a master at Rugby School, where Brooke himself was a pupil. He studied Classics at Cambridge and in 1913 won a fellowship at King's College. With Edward Marsh, he established the series of Georgian Poetry anthologies which, after their first appearance in1912, did much to popularise contemporary poetry.  In 1913 he travelled to Canada, the USA and Tahiti.

At the outbreak of war he took a commission with the Royal Naval Division, saying: 'If Armageddon is on, I suppose one should be there'. In October 1914 he arrived in Belgium to see thousands of refugees fleeing Antwerp after it had been taken by German forces. Being 'a witness to one of the greatest crimes of history' strengthened his resolve about the war. …..

Brooke's war sonnets captured a prevailing spirit of patriotic zeal.  They were instantly popular, deeply admired and widely imitated. At his death (on St George's Day, 1915), Brooke came to embody a national myth of golden youth and innocence, sacrificing itself for love of a noble country.

He died before he himself had the chance to question this view of the war, and his own role in it.