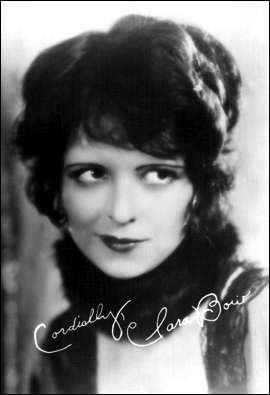 What was Clara Bow like? I will use a number of quotes to provide a feeling for who she was.

She is very young, only 16. But she is full of confidence, determination and ambition. .... She has a genuine spark of divine fire. The five different screen tests she had, showed this very plainly....

Director Frank Tuttle, with whom she worked in five later productions:

Her emotions were close to the surface. She could cry on demand, opening the floodgate of tears almost as soon as I asked her to weep. She was dynamite, full of nervous energy and vitality and pitifully eager to please everyone.

Alma Whitaker of The Los Angeles Times observed on September 7, 1924:

She radiates sex appeal tempered with an impish sense of humor ... She hennas her blond hair so that it will photograph dark in the pictures ... Her social decorum is of that natural, good-natured, pleasantly informal kind ... She can act on or off the screen—takes a joyous delight in accepting a challenge to vamp any selected male—the more unpromising specimen the better. When the hapless victim is scared into speechlessness she gurgles with naughty delight and tries another.

Bow was keen on poetry and music, but according to Rogers St. Johns, her attention span did not allow her to appreciate novels. Her creativity made directors call in extra cameras to cover her spontaneous actions, rather than holding her down.  Years after Bow left Hollywood, director Victor Fleming compared Bow to a Stradivarius violin:
"Touch her and she responded with genius". 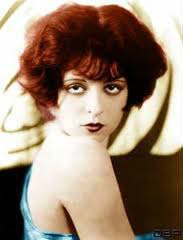 Movie stardom isn't acting ability—it's personality and temperament ... I once directed Clara Bow (Wings). She was mad and crazy but WHAT a personality!.

Adela Rogers St. John, a noted screenwriter, who had done a number of pictures with Bow wrote :

[T]here seems to be no pattern, no purpose to her life. She swings from one emotion to another, but she gains nothing, stores up nothing for the future. She lives entirely in the present, not even for today, but in the moment. Clara is the total nonconformist. What she wants she gets, if she can. What she desires to do she does. She has a big heart, a remarkable brain, and the most utter contempt for the world in general. Time doesn't exist for her, except that she thinks it will stop tomorrow. She has real courage, because she lives boldly. Who are we, after all, to say she is wrong?

In the early 1920s, roughly 50 million Americans—half the population at that time—attended the movies every week. Bow used the movies - both by watching them and being in them - to escape:

For the first time in my life I knew there was beauty in the world. For the first time I saw distant lands, serene, lovely homes, romance, nobility, glamor....I always had a queer feeling about actors and actresses on the screen ... I knew I would have done it differently. I couldn't analyze it, but I could always feel it...I'd go home and be a one girl circus, taking the parts of everyone I'd seen, living them before the glass. 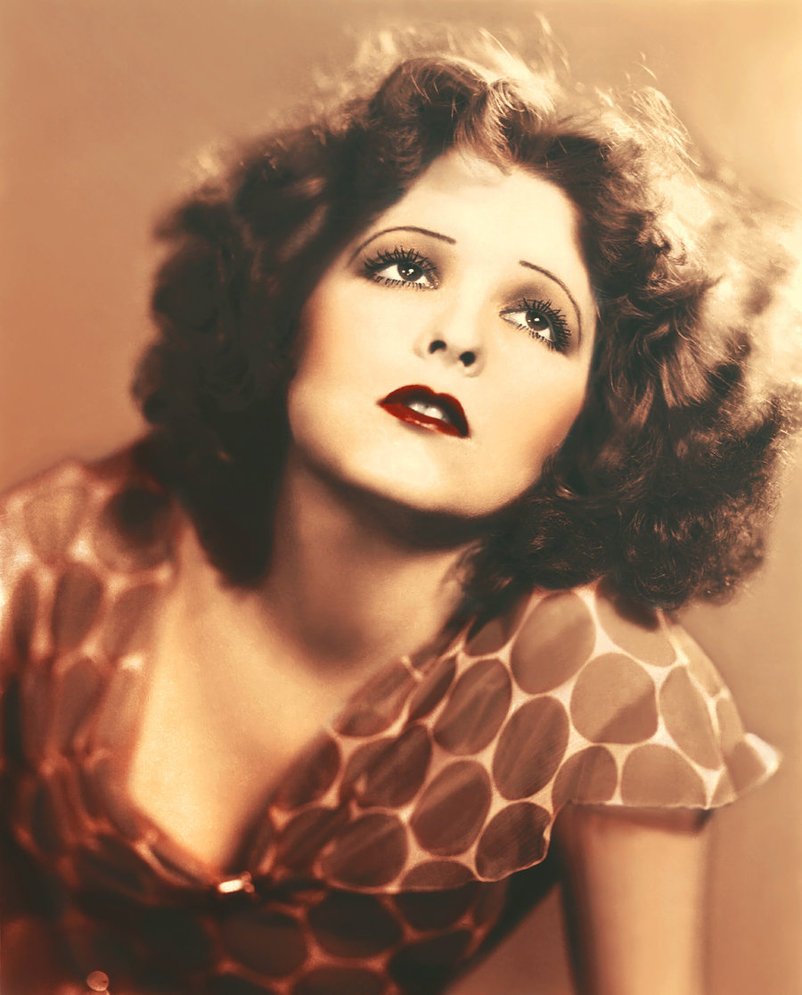 Thus Clara Bow was the ultimate right brainer – all emotion, creativity, imagination, sex drive, energy, femininity, amoral, and with little interest in intellect or reasoning, nothing could have been more perfect for constant inspiration.

To what did she owe her talent and appeal?

Difficult birth - Bow was her parents' third child; her two older sisters died in infancy. Her mother, Sarah was told by a doctor not to become pregnant again for fear the next baby might die as well. Despite the doctor's warning, Sarah became pregnant. In addition to the risky pregnancy, a heat wave besieged New York in July 1905 and temperatures peaked around 100 °F (38 °C);

I don't suppose two people ever looked death in the face more clearly than my mother and I the morning I was born. We were both given up, but somehow we struggled back to life.

Inherited genes - Bow's parents were descended from English-Irish and Scottish immigrants who had come to America the generation before.

Psychological trauma - At sixteen, Clara's mother Sarah fell from a second-story window and suffered a severe head injury. Clara had to look after her. Sarah worsened gradually, and when she realized her daughter was set for a movie career, told her she "would be much better off dead". One night in February 1922, Bow awoke to a butcher knife held against her throat. She was able to fend off the attack and locked her mother up. In the morning, Sarah had no recollection of the episode but was later committed to a sanatorium. Clara :

It was snowing. My mother and I were cold and hungry. We had been cold and hungry for days. We lay in each others arms and cried and tried to keep warm. It grew worse and worse. So that night my mother—but I can't tell you about it. Only when I remember it, it seems to me I can't live.

I'm almost never satisfied with myself or my work or anything...I worked in two and even three pictures at once. I played all sorts of parts in all sorts of pictures ... It was very hard at the time and I used to be worn out and cry myself to sleep from sheer fatigue after eighteen hours a day on different sets. 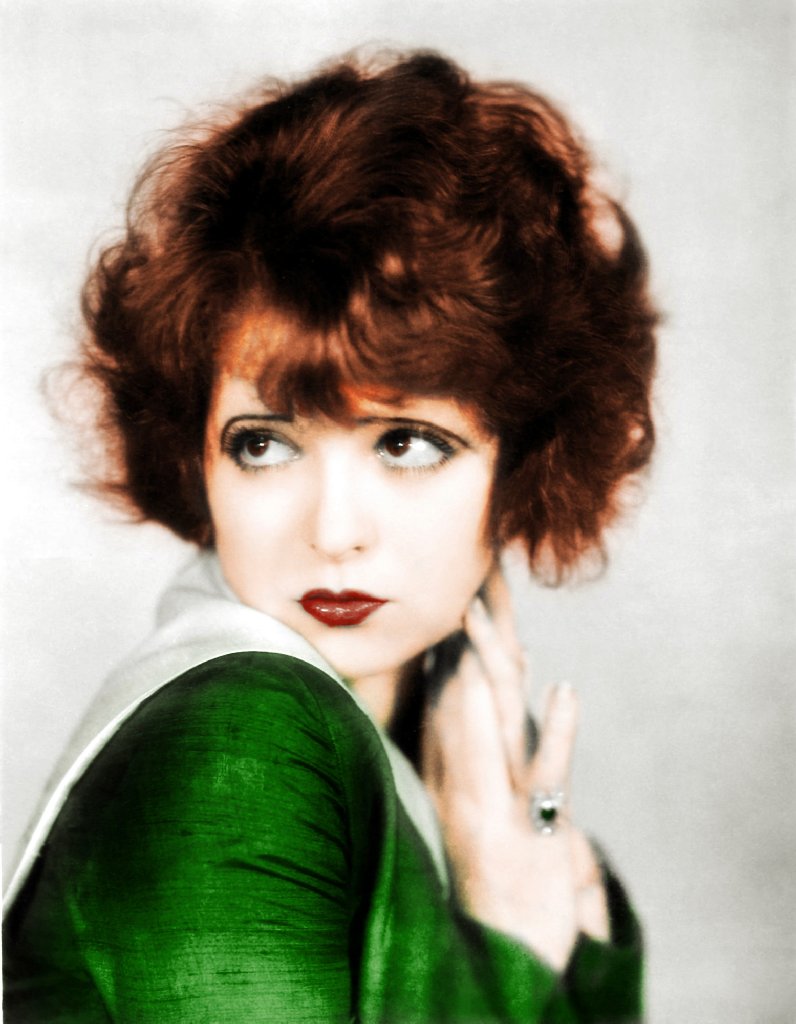 Mania and Mis-prescribed pharmaceuticals - With "talkies" Bow kept her position as the top box-office draw, but she found the new medium difficult to master: "I hate talkies," she said, "they're stiff and limiting. You lose a lot of your cuteness, because there's no chance for action, and action is the most important thing to me." A visibly nervous Bow had to do a number of retakes in The Wild Party because her eyes kept wandering up to the microphone overhead. "I can't buck progress," Bow sighed. "I have to do the best I can." By October 1929, Bow described her nerves as "all shot", and that she had reached "the breaking point". Photoplay reported "rows of bottles of sedatives" by her bed

Nervous breakdown - the pressures of fame, public scandals, overwork, and a damaging court trial charging her secretary Daisy DeVoe with financial mismanagement, took their toll on Bow's fragile emotional health. As she slipped closer to a major breakdown, her manager B.P. Schulberg began referring to her as "Crisis-a-day-Clara". In April, Bow was brought to a sanatorium, and at her request, Paramount released her from her final undertaking: City Streets. At 25, her career was essentially over.

Mental illness – Clara lived her life at overdose levels and eventually suffered. Today she might have been diagnosed with Manic depression. She retired from acting in 1933 showing symptoms of psychiatric illness. She became socially withdrawn and fearful. In 1944, when her husband was running for the U.S. House of Representatives, Bow tried to commit suicide. 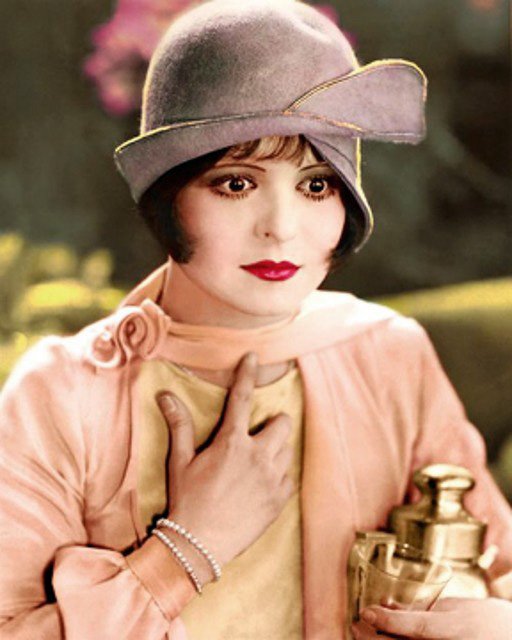 A note was found in which Bow stated she preferred death to a public life. In 1949 she checked in to The Institute of Living to be treated for chronic insomnia and diffuse abdominal pains. Shock treatment was tried. Her pains 'were considered delusional' and she was diagnosed with schizophrenia, despite experiencing neither sound nor vision hallucinations. Bow rejected the diagnosis and left the Institute.

After leaving the institution, Bow lived alone in a bungalow, which she rarely left, until her death. She spent her last years under the constant care of a nurse, living off an estate worth about $500,000 at the time of her death. She died of a heart attack on September 27, 1965 at the age of 60. An autopsy revealed that she suffered from atherosclerosis [Endothelial dysfunction], a disease of the heart that can begin in early adolescence. Bow's heart showed scarring from an earlier undetected heart attack.