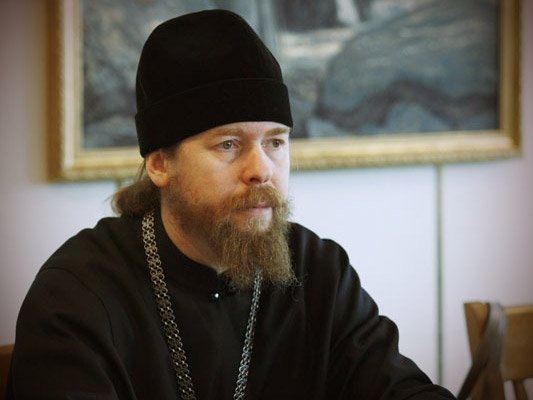 He is the titular bishop of Yegoryevsk, vicar of the Patriarch of Moscow and all Rus' and the head of the Western Vicariat (ru) of Moscow city. He is also Superior of the Sretensky Monastery in Moscow.   He has also been awarded the Order of Friendship (2008) and a number of other church and state awards.

There is another interesting aspect to Bishop Tikhon.

Putin and the monk  January 25, 2013 by: Charles Clover [Financial Times]
Father Tikhon wields influence in the church far above his modest rank of Archimandrite, or abbot, due primarily to his contacts in the Kremlin. The story that travels with him, which he will neither confirm nor deny, is that he is the confessor to Vladimir Putin. The only details he gives is that Putin, sometime before he became president at the end of 1999 (most likely while he was head of Russia’s FSB security service from 1998 to 1999) appeared at the doors of the monastery one day. Since then, the two men have maintained a very public association, with Tikhon accompanying Putin on foreign and domestic trips, dealing with ecclesiastical problems. 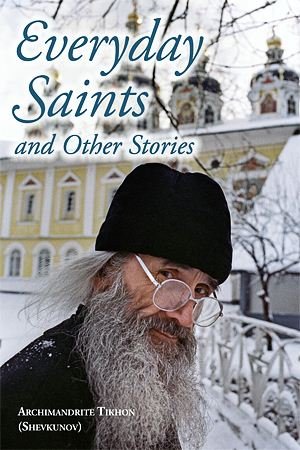 But according to persistent rumour, Tikhon ushered the former KGB colonel into the Orthodox faith and became his dukhovnik, or godfather. Father Tikhon does appear to have a very intimate knowledge of Putin’s religious life: in 2001 he gave an intriguing interview to a Greek newspaper, saying Putin “really is an Orthodox Christian, and not just nominally, but a person who makes confession, takes communion and understands his responsibility before God for the high service entrusted to him and for his immortal soul”.

He also would appear to have influence – he has campaigned almost single-handedly for anti-alcohol legislation in Russia, and achieved surprising results: just before the New Year, Russia’s parliament banned alcohol sales after 11pm. When I press on the real extent of his influence, he is blunt, saying only that he and Putin are well-acquainted, but he refuses to be drawn on the dukhovnik question. “You can believe those rumours if you want, but they certainly aren’t spread by me,” he says. The word “Putin” is nowhere to be found in his autobiography Everyday Saints and Other Stories, which became a publishing sensation in Russia last year – the top-selling book of 2012, beating even the Russian translation of Fifty Shades of Grey.

Whatever the truth of the dukhovnik question, it is something that the Kremlin finds it useful not to deny. “It’s a very private matter,” says Putin’s spokesman Dmitry Peskov, “I simply don’t know,” though he confirmed that Tikhon is “very popular” and the two men do know each other well.

Russia is undergoing a revival in religion at the moment under the auspices of the Russian Orthodox Church. According to a 2010 poll, the Orthodox Church is now the second most trusted public institution in Russia, despite the fact that only a small minority of Russians attend church regularly. According to Geraldine Fagan, author of Believing in Russia, “Russians identify with the Orthodox church as the only major social institution to have survived their nation’s turbulent history.”

President Putin in particular has a vision of spiritual revival underpinned by the ethical guidance of the church.  This alone is almost worth its own entry, as Putin has visited Mount Athos on a special pilgrimage and is said to have even had his own 'awakening' spiritually in an experience that served to ensure he was instrumental in this revival.  Thus the link between the two men is especially interesting.

Father Tikhon has indicated that what drew him to Christianity was that it became obvious to his generation that “all the great figures of the world and Russian history” –Dostoevsky, Tolstoy, Kant, Goethe and Newton, among others – “all those whom we trusted and loved and respected, all of them had thought about God in a completely different way from us.” On the other hand, “those who evoked no sympathy whatsoever” – Marx, Lenin, Trotsky – “all these destructive revolutionaries who led our state to what it had become, all were atheists.”

In other words atheism actually provides nothing culturally or scientifically, and it is this view that Putin appears also to have come to. 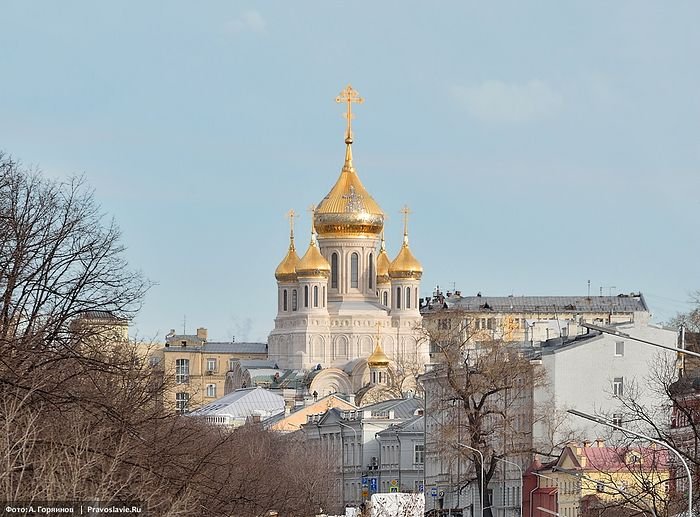 Putin and the monk  January 25, 2013 by: Charles Clover [Financial Times]
Father Tikhon Shevkunov looks a little too polished to fit the image of the Orthodox Christian monk branded into the western imagination by Dostoevsky. The beard is just unkempt enough, but his chin is a bit too sculpted, his mane of shoulder-length hair too full and flowing, and his TV delivery too flawless to belong to any crazed, self-flagellating anchorite from The Brothers Karamazov. Father Tikhon is a picture of movie-star self-assurance – with a passing resemblance to Russell Crowe. While Dostoevsky’s monks stuck to their unheated monastic cells, Tikhon is no recluse. When I interviewed him in December, he was back from a visit to China and off soon to Latin America. The whitewashed walls and onion domes of Sretensky monastery, which he presides over in downtown Moscow, is not exactly an ecclesiastical island of contemplation, isolated from the modern world. Call the monastery, for example, and you will get a switchboard operator. Need to use WiFi? No problem. Walk into an outbuilding and you will see the largest publishing house of the Russian Orthodox church and, since 2000, the best-known and most-used Orthodox website: Pravoslavie.ru. “At Mount Athos they only just got electricity, and at Sretensky [monastery] the monks all have iPads,” laughs Yevgeny Nikiforov, a friend of Tikhon’s and head of Orthodox radio station Radio Radonezh, referring to the Greek monastery which is the Orthodox religion’s gold standard in terms of cloistered asceticism. “Of course, they need these [iPads] for their proselytising work,” he says, turning serious when he sees that I am writing this down. 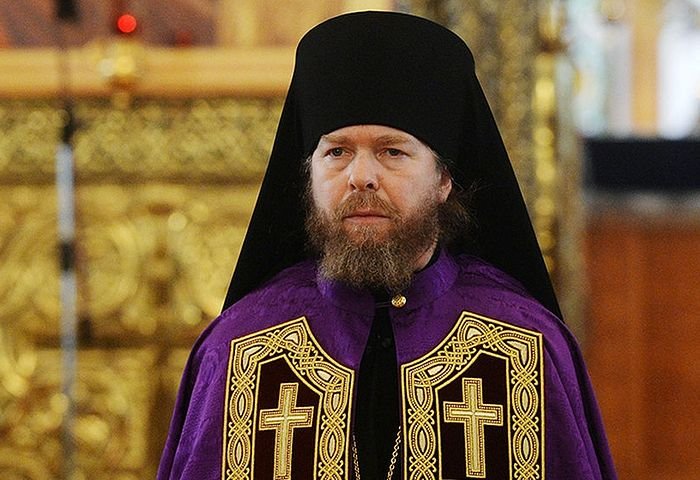 Georgy Shevkunov is a former film-school student who was baptised in 1982 at the age of 24.  Shevkunov graduated from the Screenwriter school of the Gerasimov Institute of Cinematography in 1982. The same year he accepted Christianity, was baptized and moved to the Pskov-Caves Monastery first as a toiler then as a novitiate. Pskov Caves monastery is an onion-domed former hermitage in Russia’s northeast, one of only two functioning male monasteries that remained by the 1980s of the nearly 1,000 which had existed before the 1917 revolution.

His confessor was Archimandrite John Krestiankin.  Tikhon’s autobiography is mainly devoted to those “everyday saints” whom he calls his teachers, who endured far more than he did at the hands of the Soviet regime. Father Krestiankin, the late Archimandrite of the Pskov Caves monastery, had his fingers broken during interrogation by the NKVD shortly before being sent off to Gulag for five years in 1950. “Thank God, I did not have the same serious conflicts which my predecessors had,” Tikhon says today. “In the 1980s, we did not have such repressions, they could ruin your professional life, ban you from studying, or from having prestigious work, but no more than that.”

On 2 July 1991 in Donskoy Monastery Georgiy Shevkunov took monastic vows assuming the name Tikhon after Patriarch Tikhon of Moscow. In 1993 Tikhon was appointed the head of the newly created Moscow Metochion of the Pskov-Caves Monastery.  He became the Archimandrite of the Sretensky monastery in 1995. 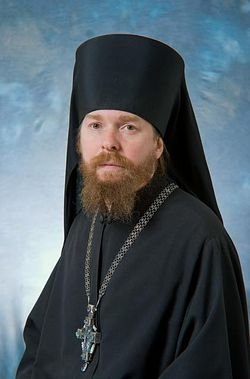 Putin and the monk  January 25, 2013 by: Charles Clover [Financial Times]
The association between Putin and Father Tikhon is odd for any number of reasons, but the first and foremost is historical. Visitors to the Sretensky monastery may miss the innocuous stone cross unless they are looking for it specifically. It sits in the garden, abutting one of the whitewashed walls, tended by cassocked monks and genuflected over by kerchiefed ladies with the look of salvation on their faces. “In memory of faithful Orthodox Christians, tortured and killed here in the years of turmoil”, reads a bronze plaque set to one side. Placed in its present spot in 1995, the cross seems to exist in oddly tragic symmetry with the building just a block away at the other end of Bolshaya Lubyanka street – the eponymous headquarters of the former KGB, an organisation which in various incarnations has killed or imprisoned more than 300,000 church workers in the name of official atheism since 1917. During Soviet times the 600-year-old monastery was closed and housed an NKVD (precursor to the KGB) barracks. It is said the premises was even used for executions. Today, much has changed. The Lubyanka, which houses the KGB’s successor, the Federal Security Service, now has its own dedicated Orthodox chapel. Sretensky monastery, reopened and renovated, has come to symbolise an awkward alliance of the church and its former persecutors. It has become the centre of a spiritual revival among Russia’s ruling circles, who are disproportionately drawn from among the former KGB, and who flooded into the Kremlin 12 years ago on Putin’s coat-tails. For Father Tikhon, the ravages directed at the church by the institution which to all intents and purposes governs Russia today are not something to dwell on – not a matter for public confrontation – but neither are they something to be specifically hidden away. They are, like the stone cross in his cloister garden, there to be seen only if one is looking for it. He says he will never be reconciled with the Soviet period of Russian history, but he nonetheless does not consider the crimes of the NKVD or the KGB to be the responsibility of contemporary individuals: “They didn’t have anything to do with that. It would be like blaming some American soldier today for what happened in Vietnam,” he says. 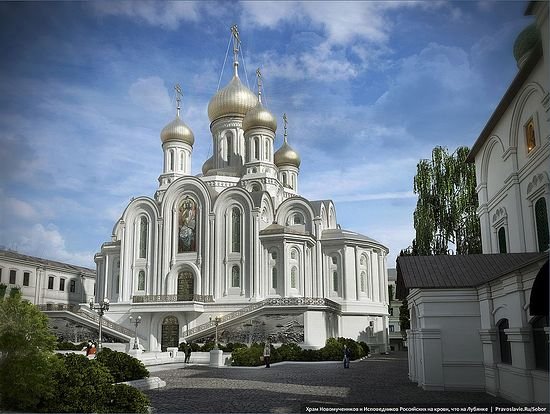 Father Tikhon has of late raised funds for the monastery’s children’s centre that cares for about 100 handicapped children, which is financed jointly by the monastery and the state. “If you are looking for a ‘symphony’ of church-state power – this is it,” he says, using the fifth-century Byzantine term for theocratic rule. “This is an example of the church and the state working together for good.”