Robert Laurence Binyon, CH (10 August 1869 – 10 March 1943) was an English poet, dramatist and art scholar. He was born in Lancaster, Lancashire to a Quaker family.  Binyon studied at St Paul's School, London. Then he read Classics (Honour Moderations) at Trinity College, Oxford, where he won the Newdigate Prize for poetry in 1891.  Immediately after graduating in 1893, Binyon started working for the British Museum. 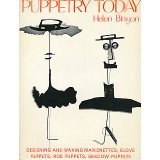 In 1904 he married historian Cicely Margaret Powell, and the couple had three daughters - Helen, Margaret and Nicolete.  Helen became an artist and studied with Paul Nash and Eric Ravilious, illustrating many books for the Oxford University Press, and was also a marionettist. She later taught puppetry and published Puppetry Today (1966) and Professional Puppetry in England (1973). Margaret wrote children's books, which were illustrated by Helen.  And Nicolete, as Nicolete Gray, was a distinguished calligrapher and art scholar.

In 1915, despite being too old to enlist, Binyon volunteered at a British hospital for French soldiers, Hôpital Temporaire d'Arc-en-Barrois, Haute-Marne, France, working briefly as a hospital orderly. He returned in the summer of 1916 and took care of soldiers taken in from the Verdun battlefield. He wrote about his experiences in For Dauntless France (1918) and his poems, "Fetching the Wounded" and "The Distant Guns", were inspired by his hospital service in Arc-en-Barrois. 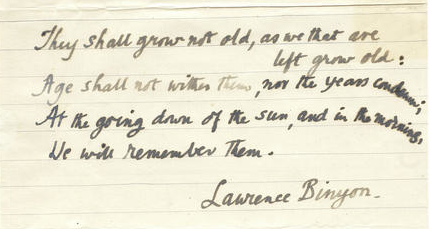 After the war, he returned to the British Museum and wrote numerous books on art; in particular on William Blake, Persian art, and Japanese art.  In 1931, his two volume Collected Poems appeared.

Laurence Binyon was born in Lancaster, studied Classics at Oxford and worked at the British Museum for forty years, latterly as Keeper of Prints and Drawings. By 1914, he had an established reputation as a poet and art historian.

'For the Fallen', written at the very start of the war, was set to music by Edward Elgar in 1917.  Its iconic fourth verse is recited at services of Remembrance and was carved (by Eric Gill, in 1921) on the stone entrance of the British Museum, as well as on countless war memorials. 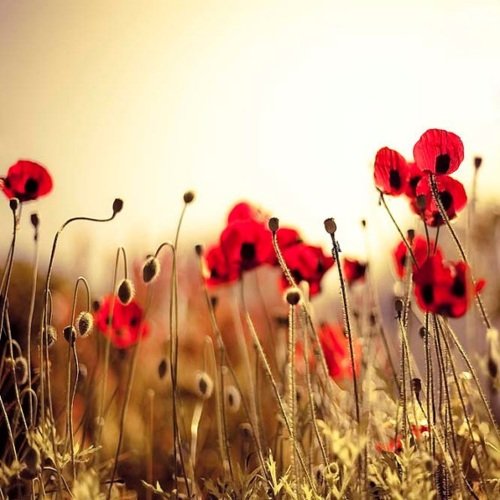 Over-age for active military service, Binyon enlisted in the County of London Regiment (Territorial Force), manning a machine gun in Holland Park and Woolwich as part of the city's defence against air attack. In July 1915 he volunteered with the French Red Cross, serving at the front as an ambulancier and medical orderly. His job involved hard, dirty, menial work, as well as assisting the surgeon during operations, and afterwards burning the amputated limbs.

He was shocked by 'the misery, the wasting and maiming', and by 'the horrible slaughter', but wrote to a friend: 'one's great longing is to be made use of in some way or other'.

Binyon later lectured British troops on Chinese civilisation as part of the YMCA education programme for soldiers at the front. He wrote a number of ground-breaking books on English, Japanese and Chinese art, as well as much poetry, including a translation of Dante's Divine Comedy.