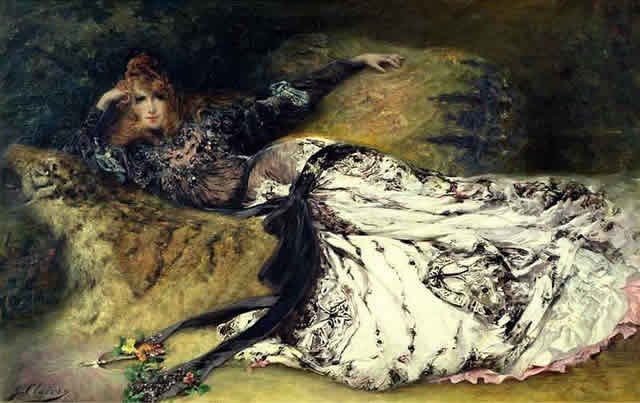 Sarah Bernhardt (1844 –1923) was a French stage and early film actress.  She was born in Paris, the illegitimate daughter of a courtesan.  Her grandfather was an itinerant Jewish spectacle merchant and petty criminal. Although much has been written about her, no one knows the real details of her life because of her tendency to exaggerate and distort. Alexandre Dumas, described her as a notorious liar.

She had an eclectic 'education'.  First an Augustine convent school near Versailles.  She then entered the Conservatoire de Musique at Déclamation in Paris.  She was not entirely successful at the conservatory, and left to become a courtesan in 1865. She eventually ended up at  the Comédie Française.  Her time there was short lived, she was asked to resign after slapping another actress across the face.

Sarah secured a contract at the Théâtre de L’Odéon where she began performing in 1866. After the end of the Franco-Prussian war she made her fame on the stages of Europe in the 1870s and was soon in demand all over Europe and in New York.  In between tours, Sarah took over the lease of the Théâtre de la Renaissance, which she ran as producer-director-star from 1893 to 1899.  In 1899 Bernhardt took over the former Théâtre des Nations on the Place du Châtelet, renaming it the Théâtre Sarah-Bernhardt.   Bernhardt continued to direct the theatre until her death, when her son  took over.

What is perhaps not so well known, is that she was an accomplished artist and sculptor.  Fifty sculptures have been documented, of which 25 are known to still exist, including the naturalistic marble Après la Tempête (National Museum of Women in the Arts [see below]. 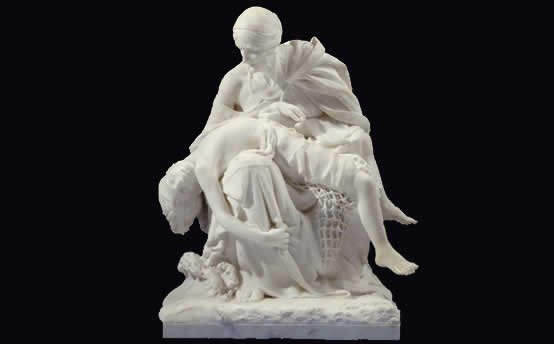 And the 1880 Art Nouveau decorative bronze inkwell, which portrays a self-portrait with bat wings and a fish tail (Museum of Fine Arts, Boston).  Personally I think her sculpture is better than her acting.......... much better! 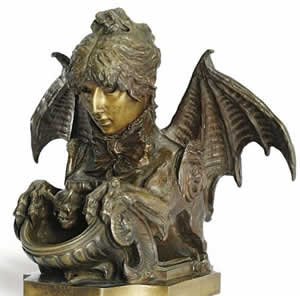 Sarah was “AC/DC”.  She had a passionate love affair with Louise Abbéma, nine years her junior. In 1990, a painting by Abbéma, depicting the two on a boat ride on the lake in the bois de Boulogne, was donated to the Comédie-Française, with a note which said  "Peint par Louise Abbéma, le jour anniversaire de leur liaison amoureuse". But early on in her life, Sarah was also the mistress of Henri, Prince de Ligne, and gave birth to their son, Maurice, in 1864.  She later married Greek-born actor Aristides Damala in London in 1882, but the marriage, quickly collapsed, “largely due to Damala's dependence on morphine”.  What is not added in these descriptions, is that Ms Bernhardt was dependent on laudanum.  And I am afraid this [and possibly her love affairs], was her main source of inspiration.

In 1905, Bernhardt injured her right knee during a performance.  The leg never healed properly. By 1915, gangrene had set in and her entire right leg was amputated; she was required to use a wheelchair for several months. Despite this she continued her career using an artificial limb almost continuously until her death. Sarah Bernhardt died from uremia following kidney failure in 1923; she is believed to have been 78 years old.