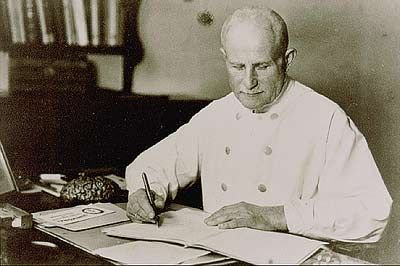 Hans Berger (21 May 1873 – 1 June 1941) was a German neurologist, best known as the inventor of electroencephalography (EEG) (the recording of "brain waves") in 1924,  and the discoverer of the alpha wave rhythm known as "Berger's wave".

I have used an article about Berger published in Perspectives in Biology and Medicine in 2001 by John Hopkins University Press, as it both describes the background to Berger’s discovery and also has the reason why he pursued the development of the EEG.

Hans Berger - from psychic energy to the EEG - David Millett
Electroencephalography has served as one of the fundamental tools of clinical neurology for over half a century.  The spontaneous electrical rhythms of the mammalian brain were first demonstrated in the 1870s by Liverpool physiologist Richard Caton, and were subsequently investigated by Napoleon Cybulski, Adolf Beck, Fleischl von Marxow and others.  The development of the human EEG, however, can be traced to only one man: the German psychiatrist Hans Berger.....
Berger's work on the human EEG was part of a 40 year program of psychophysical research, beginning in the late 1890s.  By the time Berger recorded the first human EEG in the mid-1920s, his own life had become a strange dualism.
The University of Jena had been Berger's institutional home for nearly three decades and Berger had served as Professor of Psychiatry and Director of the University Psychiatric Clinic since the end of World War I.
Yet Berger became isolated in Jena as a result of his eccentric research program, the contentious circumstances of his professional appointment and his brooding, introverted personality.
While he recorded his poetry, scientific aspirations and spiritual reflections in his diaries and secretly pursued his scientific dreams in the laboratory, Berger's rich, introspective private life was completely insulated from his austere public persona.
Berger followed a strict, conservative and routinised approach to his professional duties as a psychiatrist, completely separating his clinical obligations from his real passion for psychophysical research.
Berger was born in 1873 to Paul Friedrich Berger, chief physician of the regional asylum in Coburg, located in the heart of Thuringen. His maternal grandfather was the famous poet Friedrich Ruckert, whose verses provided  a constant source of inspiration for Berger throughout his life.  Although details of Berger's childhood are sketchy, he appears to have been a generally happy and introspective child. As he neared graduation from the gymnasium at the age of 18, Berger planned to pursue a career in the natural sciences and aspired to become an astronomer. Thus, despite his father’s position, a career in medicine did nor interest the younger Berger, who initially pursued mathematics and astronomy at the University of Berlin.
Life in Berlin turned out to be too much for the 19-year-old Berger, who was much more accustomed to the traditional life of Coburg, and he enlisted for a year of military service in Wurzburg in 1892. And it was during this period that Berger was involved in a bizarre incident that inspired his life-long search for a connection between the mind and the brain.
[see Observation]