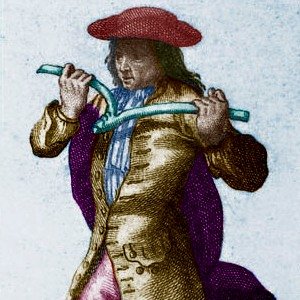 Jacques Aymar-Vernay, was a French born at St. Veran, Sept. 8,1662; his time of death is unknown. He was originally a stonemason from the village of Saint Marcellin in Dauphiné, France, but abandoned that occupation to become a dowser.  He appears to have been very good at it for a while, so good he managed to  reintroduce the idea of dowsing with a divining rod back into popular usage in Europe.

He is said to have discovered ‘springs, mines and hidden treasures’ in the earth using his rod.  He was even employed to find stolen property and detect thieves.  It is clear from the many accounts of the time that he had no idea how he did it.  It is however also clear that his success depended on inter composer communication and the use of bridges.  When he had the right bridge he was successful, when he didn’t he failed.  He even managed to find the scene of a murder using a divining rod.  He would break into a sweat, shudder, and in some instances, even faint.

Unfortunately , Aymar-Vernay had little idea of why he had these powers or why they worked, which meant that he was very vulnerable to things going wrong.  In the end he allowed himself to be submitted for testing by Prince de Condé, however, he failed every single test. He was forced to declare himself ‘an imposter’.  His case had some interesting repercussions:

This paper describes the development of the blind protocol, and its place in this history of consciousness research. It was first devised by Croesus, King of the Lydians (BCE 560-547) and reported by Herodotus ( approximately BCE 484 - approximately 424), and was created to protect against fraud in assessing an Anomalous Perception (AP) event; a Remote Viewing (RV) experiment little different from those conducted today.

Its next use in the 17th century was to study a peasant farmer, Jacques Aymar, who solved crimes with Anomalous Perception, using dowsing. Not only was a blind protocol employed, but the rudiments of controls were introduced to assess Aymar.

The next documented use of a blind protocol in consciousness research occurred in 1784 …. King Louis the XVIth created a commission to evaluate Franz Anton Mesmer's claims concerning healing through "animal magnetism," administered while people were in a trance, and asked Benjamin Franklin to be the commission's head. .. Franklin … created the blind protocol to answer the king's question as to whether "animal magnetism" was real, and he not only introduced demographic variables and controls, but literally blindfolded people, which is why today we call it the blind protocol.

…. Ultimately,  …. research in areas such as therapeutic intent/healing and remote viewing suggest that all consciousness from single-celled organisms to human beings may be interlinked through a non-local aspect of awareness they all share.