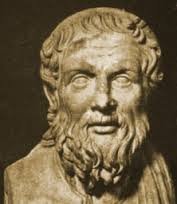 Apollonius of Tyana was a Greek Neopythagorean philosopher, mystic, seer and prophet  from the town of Tyana in the Roman province of Cappadocia in Asia Minor. Little is known about him with certainty. He appears to have lived around about the same time as Jesus.   By far the most detailed source is the Life of Apollonius of Tyana, a lengthy biography written by the sophist Philostratus at the request of empress Julia Domna.

But facts are hard to come by, as James Francis has said, "the most that can be said ... is that Apollonius appears to have been a wandering ascetic/philosopher of a type common to the eastern part of the early empire."

However we do know that he was a Pythagorean and as such, in conformity with the Pythagorean tradition, opposed animal sacrifice, and lived on a frugal, strictly vegetarian diet and had views and practises similar to Pythagorus.

Philostratus devoted two and a half of the eight books of his Life of Apollonius (1.19–3.58) to the description of a journey of his hero to India. According to Philostratus' Life, en route to the Far East, Apollonius reached Hierapolis Bambyce (Manbij) in Syria, where he met Damis, a native of that city who became his lifelong companion. 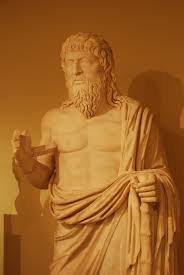 Apollonius was a known figure in the medieval Islamic world. In the Arabic literature he appears as Balinus (or Balinas or Abuluniyus). Arabic-speaking occultists dubbed him "Lord of the talismans" and related stories about his achievements as a talisman-maker. They appreciated him as a master of alchemy and a transmitter of Hermetic knowledge.

Medieval alchemist Jabir ibn Hayyan's Book of Stones According to the Opinion of Balinas contains an exposition and analysis of views expressed in Arabic occult works attributed to Apollonius. There were also medieval Latin and vernacular translations of Arabic books attributed to “Balinus”.

The Tablet of Wisdom written by Bahá'u'lláh, the founder of the Bahá'í Faith, names "Balinus" (Apollonius) as a great philosopher, who "surpassed everyone else in the diffusion of arts and sciences and soared unto the loftiest heights of humility and supplication”.

One of the reasons why Apollonius is not as well known in western cultures is the attitude taken by the church.  Beginning in the early 16th century, there was great interest in Apollonius in Europe, but the traditional ecclesiastical viewpoint prevailed, the Tyanean was usually treated as a demonic magician and a great enemy of the Church who collaborated with the devil and tried to overthrow Christianity.