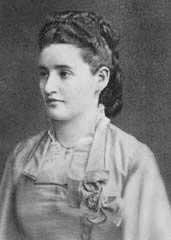 Anna O. was the pseudonym of a patient of Josef Breuer, who published her case study in his book Studies on Hysteria, written in collaboration with Sigmund Freud. Her real name was Bertha Pappenheim (1859–1936), an Austrian-Jewish feminist and the founder of the Jüdischer Frauenbund (League of Jewish Women).

Anna O. was treated by Breuer for severe cough, paralysis of the extremities on the right side of her body, and disturbances of vision, hearing, and speech, as well as hallucination and loss of consciousness. She was diagnosed with hysteria.

The problems started on the death of her father when she was prescribed Chloral hydrate  to sedate her and help her sleep.

This then made her psychotic and she sought help.

In perhaps one of the greatest ironies of all time, her treatment is regarded as marking the beginning of psychoanalysis. So the doctors buggered up her mind then invented psychoanalysis to study what they had achieved. [sorry for the cynicism]

Breuer observed that whilst she experienced 'absences' (a change of Personality accompanied by confusion - Multiple Personality disorder), she would mutter words or phrases to herself. In inducing her to a state of hypnosis, Breuer found that these words were "profoundly melancholy fantasies...sometimes characterized by poetic beauty". Not unusual for someone on drugs.

The technique of 'Free Association' came into being after Anna/Bertha decided (with Breuer's input) to end her hypnosis sessions and merely talk to Breuer, saying anything that came into her mind. She called this method of communication "chimney sweeping", and this served as the beginning of free association.

Sigmund Freud got involved and stated that her illness was “ a result of the resentment felt over her father's real and physical illness that later led to his death.”  Hmmm, typical Freud.

Historical records have since showed that when Breuer stopped treating Anna O. she was not becoming better but progressively worse. She was ultimately institutionalized:

"Breuer told Freud that she was deranged; he hoped she would die to end her suffering".

Once she stopped taking the chloral hydrate her doctors had prescribed and managed to get away from the institutions, she recovered and led a productive life. The West German government issued a postage stamp in honour of her contributions to the field of social work.

There has to be a moral to this somewhere don't you think?

As has been said 'the world is full of clever men but not wise men''.