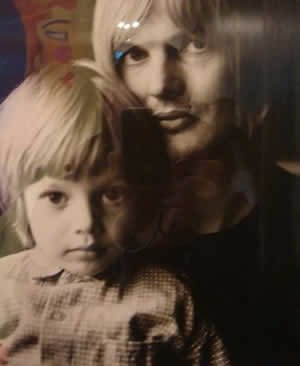 Alan Aldridge is an English artist, graphic designer and illustrator.  Born in 1943 in east London, he currently lives in Los Angeles.  His work is characterised by a ‘flowing, cartoony style and soft airbrushing’ .

Alan left school at 14 to work at Banana Wharf in London, unloading cargo boats, then later became an insurance clerk, a chicken plucker in a Halal butcher, a scene painter at The Old Vic and a barrow boy on Stratford Market.

In 1963, without having any art education, he started drawing portraits around the pubs of Soho and designing eye-popping book jackets for Penguin Books. He quickly became the ‘in-est’ artist in London, being dubbed by the press as ‘Beardsley in Blue Jeans’.

Aldridge first worked as an illustrator at "The Sunday Times Magazine.'' After doing some freelance book covers for Penguin Books, he was hired in March 1965 by Penguin's chief editor Tony Godwin to become the art director.   Over the next two years as art director, he especially focused on science fiction book covers and introduced his own unique style. In 1968 he moved to his own graphic-design firm, INK, which became closely involved with graphic images for the Beatles Apple Corp.  John Lennon awarded him the title of ‘His Royal Master of Images to Their Majesties The Beatles’

During the 1960s and 1970s he was responsible for a great many album covers, for example the Who’s album  ‘A Quick One’, The Rolling Stones and Cream. His involvement in the pop world included starring in the movie ‘Lets all make love in London’ with Mick Jagger and Jimi Hendrix.

Aldridge created the artwork for Captain Fantastic and the Brown Dirt Cowboy by Elton John in 1975.   It was developed as a film project, which took him to Hollywood. The album cover got him his second Grammy nomination.

He is possibly best known, however, for the picture book The Butterfly Ball and the Grasshopper Feast (1973), a series of illustrations of insects and other creatures, which he created in collaboration with William Plomer, who wrote the accompanying verses.  The Peacock Party (1979) and The Lion's Cavalcade (1980 are sequels to The Butterfly Ball.

He had a memorable encounter with Salvador Dali.  This story is derived from his autobiography:

“The anecdote that really stands out, though, is the one about Aldridge's encounter with Salvador Dali at Nice Airport in 1967. Waiting for a flight back to London, the scruffy young artist is sitting at the airport bar, doodling in the back of his copy of The Hobbit, when the great Dali flounces in, surrounded by a rumbustious gang of hangers-on. Realising he is in the presence of another artist, as if via some Jedi-like sixth sense, Dali makes his way over to where Aldridge is sitting. After ranting at him in Spanish ..he snatches the bewildered Londoner's book and pen, turns to a new page and begins to draw. Scribbling at incredible speed, and to roars from the assembled crowd, the master produces a magnificent, rearing unicorn – then pushes the book back towards Aldridge with a grin, daring him to do better.
At first, Aldridge freezes: "The crowd tightens. Dali's addled eyeballs bore through me. I stare at the page, my mind a blank." But then his boyhood hero John Tenniel, illustrator of Lewis Carroll's Alice books, pops into his head, and he draws Dali as the Mad Hatter. The onlookers laugh. Game on. Dali shoots back with a spectacular sketch of St George slaying the Dragon, putting Aldridge under pressure once more, but then the PA system announces the departure of the Iberia Airlines flight to Barcelona. That should be the end, but it isn't – the maestro isn't ready to leave just yet. He orders a couple of his flunkeys to delay the plane and waits patiently for Aldridge's next move. Hit by a sudden flash of inspiration, the young upstart creates another Dali caricature, this time imagining his adversary as a sort of half-plane, half-fish. The crowd goes wild. Dali smiles thinly, embraces Aldridge once and stalks off to catch his flight.

And the inspiration?  Principally LSD but other substances too.