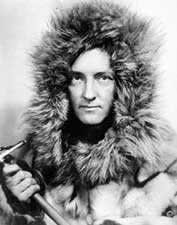 Rear Admiral Richard Evelyn Byrd, Jr., (1888 –1957) was an American naval officer who specialized in feats of exploration. He was a pioneering American aviator, polar explorer, and organizer of polar logistics. Aircraft flights, in which he served as a navigator and expedition leader, crossed the Atlantic Ocean, a segment of the Arctic Ocean, and a segment of the Antarctic Plateau.

Byrd learned to fly in World War I, where  he developed a passion for flight. On 9 May 1926, Byrd and pilot Floyd Bennett attempted a flight over the North Pole in a Fokker F-VII Tri-motor called the Josephine Ford. This flight went from Spitsbergen (Svalbard) and back to its take-off airfield. Byrd claimed to have reached the Pole. From 1926 until 1996, there were doubts, defenses, and heated controversy about whether or not Byrd actually reached the North Pole. In 1958 Norwegian-American aviator and explorer Bernt Balchen cast doubt on Byrd's claim on the basis of his extensive personal knowledge of the airplane's speed. In 1971 Balchen speculated that Byrd had simply circled aimlessly while out of sight of land.  The controversy has not been settled.

In 1928, Admiral Byrd began his first expedition to the Antarctic involving two ships, and three airplanes: A base camp named "Little America" was constructed on the Ross Ice Shelf and scientific expeditions by snowshoe, dog-sled, snowmobile, and airplane began. Photographic expeditions and geological surveys were undertaken for the duration of that summer, and constant radio communications were maintained with the outside world. After their first winter, their expeditions were resumed, and on 28 November 1929, a flight to the South Pole and back was made in 18 hours, 41 minutes.

On his second expedition, in 1934, Byrd spent five winter months alone operating a meteorological station, Advance Base, from which he narrowly escaped with his life after suffering carbon monoxide poisoning from a poorly ventilated stove.

“Unusual radio transmissions” from Byrd finally began to alarm the men at the base camp, who then attempted to go to Advance Base. The first two trips were failures due to darkness, snow, and mechanical troubles. Finally, Thomas Poulter, E.J. Demas, and Amory Waite arrived at Advanced Base, where they found Byrd in poor physical health. The men remained at Advanced Base until 12 October when an airplane from the base camp picked up Dr. Poulter and Byrd. The rest of the men returned to base camp with the tractor. This expedition is described by Byrd in his autobiography Alone.

What is not recorded is the number of hallucinations he had as a result of being poisoned.

Byrd died in his sleep on 11 March 1957 of a heart ailment at his Brimmer Street home in Boston.