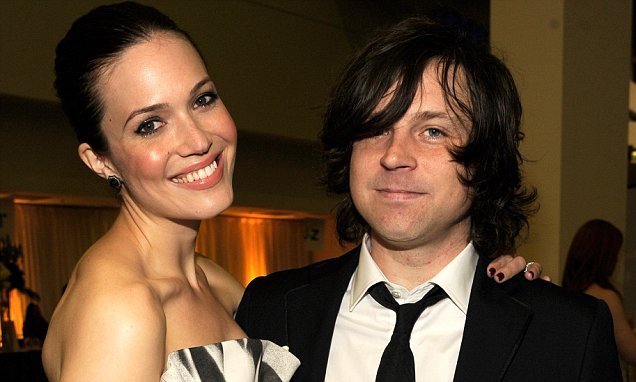 He is best known for his prolific solo career, and as a former member of alternative country band Whiskeytown, with whom he recorded three studio albums.

In 2000, Adams left Whiskeytown and released his first solo album, Heartbreaker, to critical acclaim. The album was nominated for the Shortlist Music Prize. In 2001, Adams released the UK certified-gold Gold, which included the hit single, "New York, New York".

He released five albums with the rock band The Cardinals and in 2009 he married singer-songwriter and actress Mandy Moore. Sadly in 2015, the actress and singer filed for divorce from the musician weeks before their sixth wedding anniversary.

On 2009, Adams left The Cardinals and announced that he was taking a break from music.   He resumed performing in October 2010 and released his thirteenth studio album, Ashes & Fire, on October 11, 2011. The album peaked at No. 7 on the Billboard 200. In September 2014, Adams released his fourteenth album Ryan Adams on his PAX AM label.

Adams has also written Infinity Blues, a book of poems, and Hello Sunshine, a collection of poems and short stories.

And he has Meniere’s disease.

Having your first album of new material immediately break into the Billboard Top 200 albums chart on release week is usually cause for celebration for most rock stars. But Ryan Adams isn't smiling just because his brilliantly subdued new disc, Ashes & Fire, slid right in at #7 this week. That's because the alternative singer, 36, is still grappling with Meniere's Disease, a debilitating and incurable inner ear condition that forced him to take a break from music for over two years.  Now back and on tour promoting the disc, the North Carolina native opens up to Us about living with it and how wife Mandy Moore has helped with his treatment.

UsMagazine.com: Your last album of brand new material was Cardinology (with your band, The Cardinals) in 2008. Why the time off?

Ryan Adams: I did my last live shows in March 2009, but I was really suffering from an inner ear disease called Meniere's disease and all the stuff that goes along with it, which is a lot of vertigo, balance issues, and problems with depth perception. When I was on stage, with one shift in the lighting, I couldn't quite see where to put my foot, and it made it really, really difficult for me to just do what I needed to do with my band. Also, I started experiencing tinnitus, which started in 2005, maybe even before. I actually was missing tours and shows, like little tours, from these intense ear infections and basically they started to graduate into this thing where somewhere around 2006, 2007, I was diagnosed. But the tinnitus was an overwhelming noise that never stopped in my left ear, 24 hours a day.

Us: So the tinnitus just accelerated very quickly because of this disease? 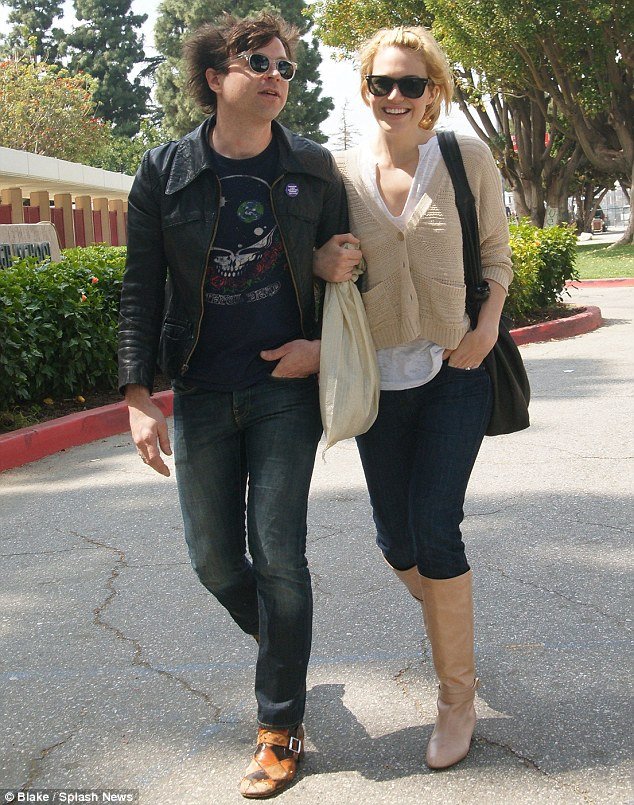 Early days of romance: Mandy and Ryan are pictured in March 2009,
two weeks after their wedding

RA: I don't know if the kind of tinnitus that I'm experiencing is the kind of tinnitus that someone with just tinnitus experiences. The way I can explain mine is on a good day, it sounded like the wind was howling and there was a siren. On a bad day, it sounded like I was standing in front of a jet engine in front of my left ear. As all that stuff was going on, I was losing my hearing. I would hear these very high-pitched noises would be in my left ear and they would come on with the feeling of pressure and then after that there would be this very, very intense high-pitched frequency that would sort of emanate to an almost unbearable level until it would completely disappear. And when it would disappear, it would also feel like pressure as well and then there would be silence where that was. But it would be because I could no longer hear that note. So I was listening to the sound of my hearing going, which is terrifying, extremely painful, and it was causing me to lose sleep. And the side effects for me were seasickness, some people experience vertigo, but mine manifested itself in a sort of extreme nausea and like seasickness. I was really worn down and ill and I was always carsick, and I was on tour from 2007 to 2009 as this is happening. It was getting to the point where just going to a radio station in the morning before a show was making me violently ill and I was being not able to perform on stage. I weighed like 130 lbs. or something, I looked like shit and I was just destroyed. I was completely destroyed. At the same time, we got a nice review in Rolling Stone, but people were starting to lay back into me as a musician and as a performer. I'm a pretty flawed dude, and I keep it pretty real, and I do my best to not act like a rock star, which means people think I'm being one. I just don't cover stuff up, I am who I am, and sometimes in my life I feel like I've stepped into the role of punching bag, and I couldn't do it. I didn't have the strength to be punk rock.

Us: Are you cured or are you still going through it?

RA: No, it's a degenerative disease, and it's not curable. It happens and you deal. You can change your life to try to get on top of it, which is what I've done. Different people experience different symptoms but the main thing you do is do your best to live well.

Us: Have you taken medication or yoga or breathing exercises or something to
deal with it? 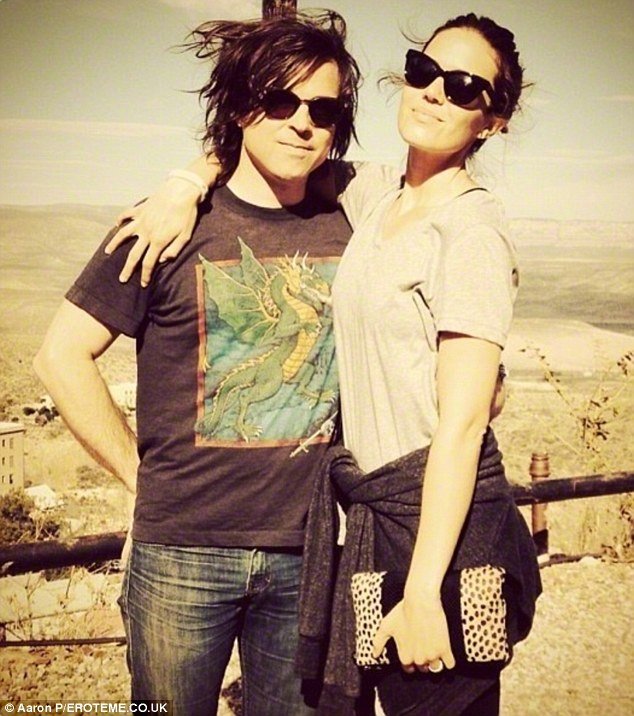 RA: Yoga is really good for it actually. I went to see an acupuncturist that my wife sees who's an extremely beautiful man and he has this great place and I started there. I also went to see a nutritionist who works on doing blood labs with you do change your supplements or add supplements to your life. And then I started to see a hypnotherapist and that was to deal with my doubt about playing music again after I was feeling a bit better. Having to play was like having a panic attack, and the panic attack would make me have a Meniere episode. And the Meniere episode would make me forget a lyric, or I would feel like I was going to fall down on stage. So there was a great amount of psychological damage that it did, there was a great amount of stage fright that culminated from this. So, I went to see this man and eventually we even worked on training my mind so that I did not hear my tinnitus, and I don't hear it anymore. I changed everything I eat, I don't smoke anymore, I started to hike, I don't drink coffee.

Us: Weren't you going to announce your retirement at one point?

RA: I don't think I ever said retiring. I think some of what I said got misconstrued; I think I said I was going to take a step back from music. I was really emotional when I said it and I was in a lot of pain, but I remember saying that I need to take a step back. I was becoming more and more ill, and I was hearing people less and less. I didn't know if I was able to do what I do anymore. I thought maybe this is done, maybe I just need to walk away.

Us: I know you're from the South, so where are you living and recording now?

RA:I haven't lived in North Carolina since I was 20-years-old, New York City was my home base for all of my adult life, and then in 2008 I moved to Los Angeles. I've actually been coming out here the whole time I've been making albums, and I've always loved being out here and I have great, great friends out here. It was an interesting move because I had been in New York for as long as I had and was very used to living in New York. I still go to New York quite often, and I love it as much as I ever did. But it wasn't completely hard for me to move to the West Coast.

Us: Obviously you're going on the road, and you have a sold-out tour to support this record. Are you nervous given the last time that you toured you had such major health issues?

RA: No. I just actually did a month of these shows in Europe and it was amazing. I was playing these great, old school theaters because I wanted to play the oldest, coolest theaters that I could find. We haven't had a show like that in a long time. It was a fun tour, and I would say, the best tour that I've ever had. That's a pretty big step up and I'm happy that that's the way it's working.