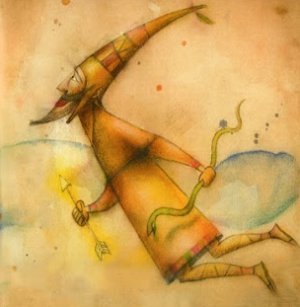 Abaris the Hyperborean, son of Seuthes, was a legendary sage, healer, prophet and follower of  Apollo known to the Ancient Greeks.  He was supposed to have learned his skills in ‘Hyperborea’ which itself was a legendary place, equivalent to the spiritual realm. He fled his actual homeland Scythia during a plague.

Although legendary he was described by numerous Greek writers in glowing terms and in general one gets the impression he was a very gifted shaman healer.  His Scythian dress and simplicity and honesty created a great sensation in Greece, and he was held in high esteem.  Gregory the Theologian mentions him in his Epitaphios for Basil the Great.

According to Herodotus he was said to have “travelled around the world like an arrow” which in symbolic terms mean he was capable of out of body experiences.  Heraclides Ponticus wrote that Abaris “flew on the arrow” in similar ways to the legends of broomsticks.

Plato in the Charmides  classed him amongst the "Thracian physicians who practice medicine upon the soul as well as the body by means of incantations" (epodai). So in effect he knew spells.  He is also extensively described in Iamblichus's Vita Pythagorica, where he manages to rid both Sparta and Knossos of the plague.

Iamblicus also attributes to Abaris a special expertise at ‘extispicy’, the art of predicting future events through the examination of anomalies in the entrails of animals.

But these accounts are legends and we have no first hand accounts.  There is a reason for including him, however, as all these accounts seem to tie in perfectly with the observations of a first hand nature that I found on shamanic healers in other cultures.  Thus the descriptions by Plato, Herodotus, Iamblicus and so on may well be true and the fact that Plato included them is as much an interesting reflection on Plato as it is on Abaris