The Oracles of Hystaspes 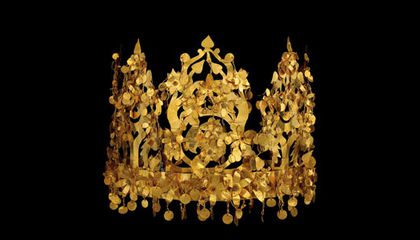 Vishtaspa (Old Persian: "Vištāspa", in Zoroastrian Middle Persian Wishtasp, in Ancient Greek Ὑστάσπης "Hystaspes") is the Avestan-language name of a figure of Zoroastrian scripture and tradition, portrayed as an early follower of Zoroaster, his patron, and as instrumental in the diffusion of the prophet's message.

Vishtaspa/ Hystaspes himself is referred to in the Gathas, the oldest texts of Zoroastrianism which were considered to have been composed by Zoroaster himself. In these hymns, the poet speaks of Vishtaspa as his ally (Yasna 46. 14), follower of the path of Vohu Manah (Y. 51. 16), and committed to spreading the prophet's message (Y. 51. 16, 46. 15, 53. 2). 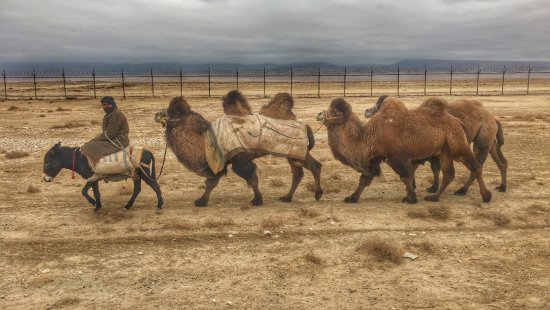 In Yasna 28. 1–28. 7, Zoroaster appeals to Mazda for several boons, including the power to vanquish their foes for Vishtaspa and himself. Considered collectively, the Gathas celebrate Vishtaspa as the "patron of Zoroaster and the establisher of the first Zoroastrian community. "

In the Gathas, Vishtaspa is repeatedly (Y. 46. 14, 51. 16, 53. 2) referred to as a kavi, which is etymologically a term for a mantic seer, poet-priest, or wise man. In tradition the kavis are kings, "evidently because Vīštāspa and his forebears, the 'kavis' par excellence, were princely rulers. Presumably the gift of prophecy, of mantic poetry, was hereditary in their family. " 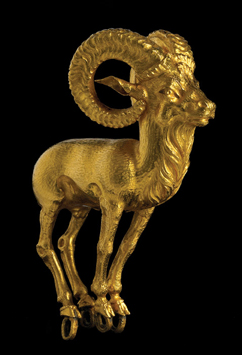 The name "Visthaspa" is "Hystaspes" in the Greek and Latin texts of the Hellenistic era. The Greeks and Romans imagined Hystaspes to be a sage of great antiquity, and he was grouped in their literature with two other Magi or Mages hellénisés, Zoroaster and Ostanes.

Zoroaster - The Greeks—in the Hellenistic sense of the term—had an understanding of Zoroaster as the "prophet and founder of the religion of the Iranian peoples." Zoroaster was set in the ancient past, and was described as a king of Bactria and having a mission preceded by ascetic withdrawal and enlightenment.  Plutarch presents Zoroaster as a "teacher of Pythagoras". Zoroaster has also been described as a sorcerer-astrologer – the creator of both magic and astrology.

Ostanes -  so Pliny states, was a Persian magus who had accompanied Xerxes in his invasion of Greece, and who had then introduced magic to that country. 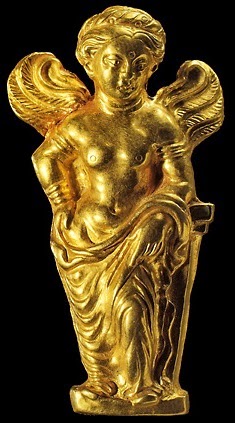 But the figure of Ostanes was such that Pliny felt "it necessary to supplement his history with doppelgangers"; so, not only does Ostanes appear as a contemporary of the early 5th century BCE Xerxes, but he is also contemporary with—and companion of—the late 4th century BCE Alexander. Pliny goes on to note that Ostanes's introduction of the "monstrous craft" to the Greeks gave those people not only a "lust" (aviditatem) for magic, but a downright "madness" (rabiem) for it, and many of their philosophers, such as Pythagoras, Empedocles, Democritus, and Plato traveled abroad to study it, and then returned to teach it. 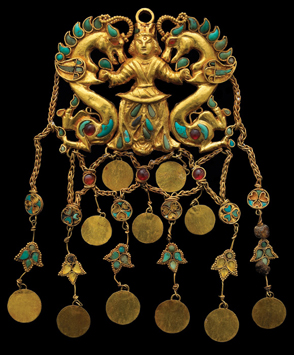 In Zoroastrian apocalyptic chronology, the dynasties of the world are divided into seven ages, each named after a metal, as in the Greek system. According to this chronology (Zand-i Wahman yasn 2. 16, Dabistan 140), Vishtaspa’s ascent to the throne ended the reign of silver, and his reign was over the age of gold. In tradition, the works of Zoroaster were said to have been kept in a royal library that was then destroyed by Alexander the Great. In Denkard 3. 420, it is Vishtaspa who is said to have been the king who had those texts made and placed in the royal library. 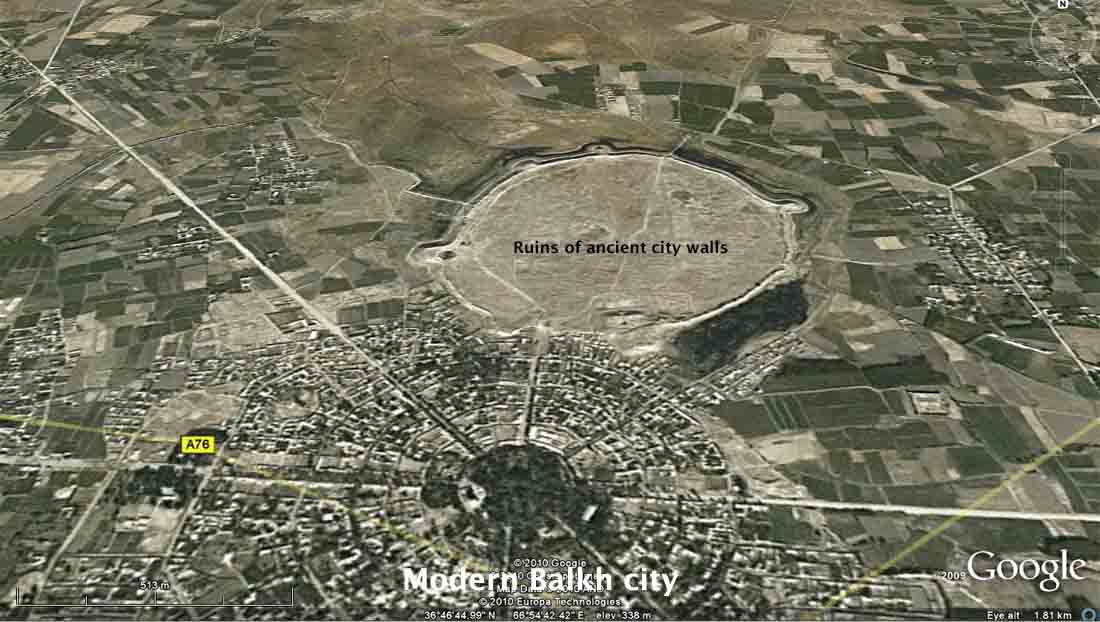 In "a legend [that] persisted down to Sasanian times and beyond, [...] both Zoroaster and his patron Vishtaspa [were associated] with the Bactrian capital of Balkh".  In fact in  V G Lukonin’s  (1983), "Political, Social and Administrative Institutions", in Yarshater, Ehsan (ed.), Cambridge History of Iran, vol. 3(2): The Seleucid, Parthian and Sasanian Periods, London: Cambridge UP,”  Balkh is regarded as the birthplace of Vishtasp and the 'holy land' of Zoroastrianism. 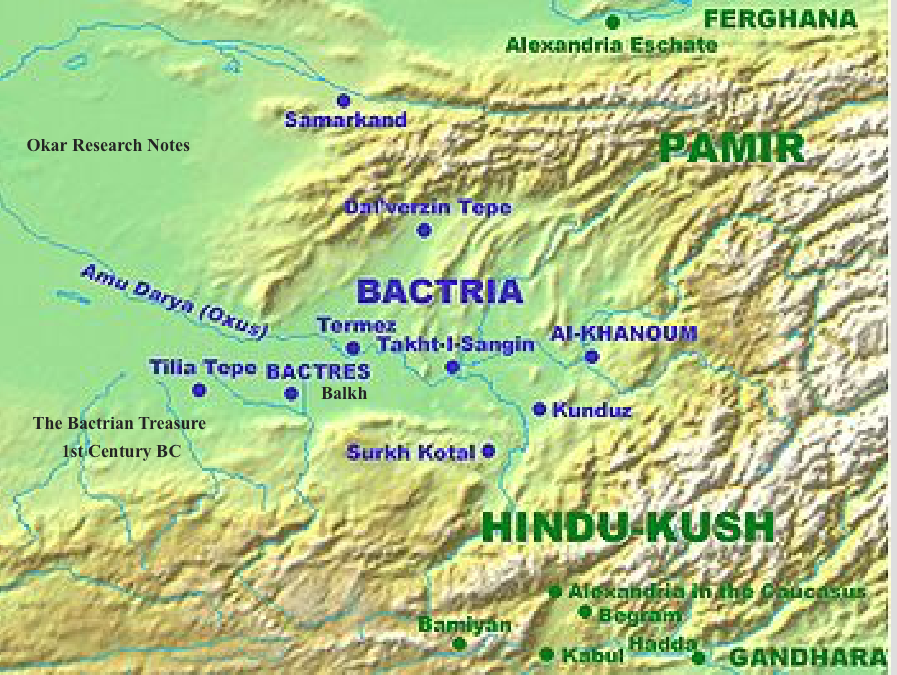 Bactria was not the only region that claimed Vishtaspa for its own; as recorded in post-Sassanid sources (but apparently older), at least four other Iranian provinces – Parthia, Drangiana (Sistan), Atropatene and Persia – also attributed events in their local history to Vishtaspa.

This is why we have chosen photos of some of the pieces from the ‘Bactrian Horde’ to illustrate this entry.  The Bactrian pieces were excavated in 1978-79 from the graves of six wealthy people at a site called Tillya Tepe ("Hill of Gold"), which as you can see from the map, is extremely close to Balk. “The 2,000-year-old artifacts exhibit a rare blend of aesthetic influences (from Persian to Classical Greek and Roman) and a high level of craftsmanship”.  They are fashioned into cupids, dolphins, gods and dragons and encrusted with semiprecious stones. 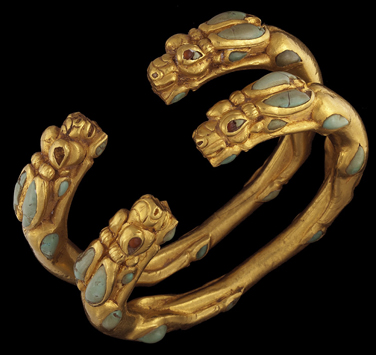 The diadem, a five-inch-tall crown of hammered gold leaf, conveniently folds for travel, and a thumb-size gold figure of a mountain sheep is delicately incised with curving horns and flaring nostrils.

In the grave of the only male found at the site—the excavation team uncovered turquoise-studded daggers and sheaths and a braided gold belt with raised medallions that bear the image, some say, of Dionysus, the Greek god of wine, riding side saddle on a panther.

The Oracles of Hystaspes

In Zoroastrian tradition, which builds on allusions found in the Avesta, Vishtaspa is a righteous king who helped propagate and defend the faith. But in Greco-Roman literature, Zoroaster's patron was the pseudo-anonymous author of a set of prophecies written under his name - The Oracles of Hystaspes.

The Oracles of Hystaspes was apparently based on genuine Zoroastrian myths, and "the argument for ultimate magian composition is a strong one. [...]   Although "[p]rophecies of woes and iniquities in the last age are alien to orthodox Zoroastrianism". 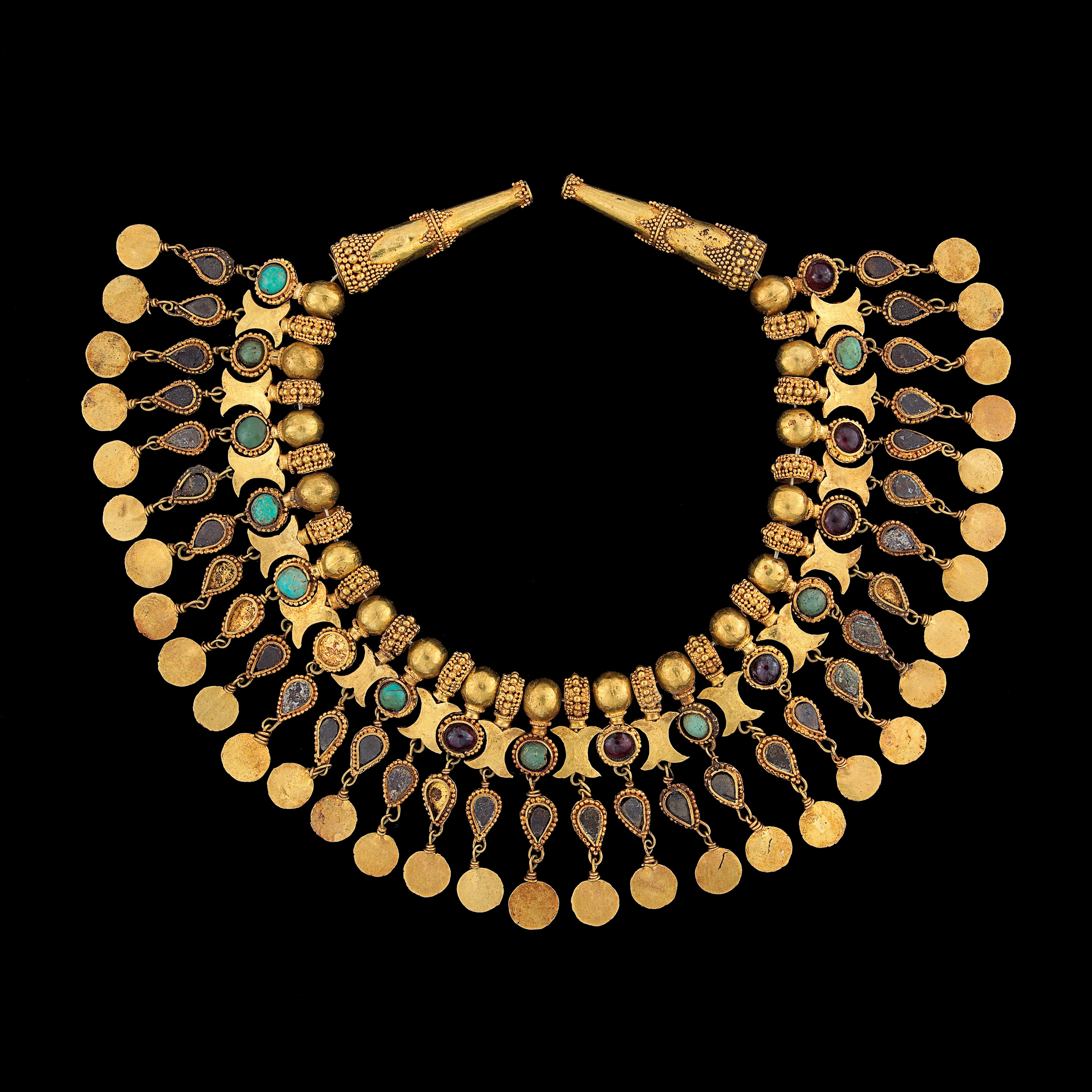 None of the works attributed to Pseudo-Hystaspes are still extant, but quotations and references have survived in the works of others, especially in those of two early Christian writers

·        Lactantius from the mid-3rd century in North Africa

It was "presumably" the prophecy of the destruction of a victorious power  that caused the work to be proscribed by Rome; according to Justin Martyr (Apologia, I. 44. 12), reading the work was punishable by death. 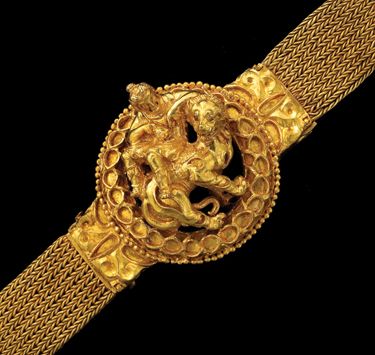 all of whom describe it as foretelling the downfall of the Roman empire, the return of rule to the east, and of the coming of the saviour. As is often the case with apocalyptic and prophetic literature, however, one finds the text to be an archetype to be repeated over many ages which could be applied as much to America, for example, one of the current incarnations of the Roman Empire as to, say, Russia. 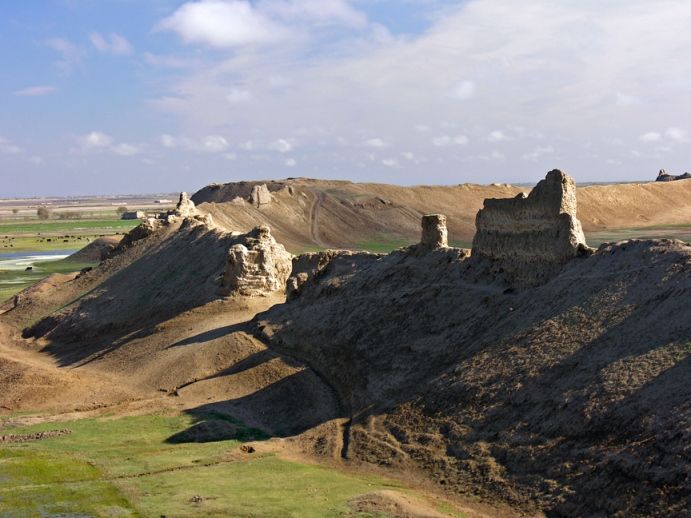 Who By Fire - Leonard Cohen

And who by fire, who by water
Who in the sunshine, who in the night time
Who by high ordeal, who by common trial
Who in your merry merry month of may
Who by very slow decay
And who shall I say is calling?

Lactantius provides a detailed summary of the Oracles of Hystaspes in his Divinae Institutiones (Book VII, from the end of chapter 15 through chapter 19). It begins with Hystaspes awaking from a dream, and needing to have it interpreted for him. This is duly accomplished by a young boy, "here representing, according to convention, the openness of youth and innocent to divine visitations. " As interpreted by the boy, the dream "predicts" the iniquity of the last age, and the impending destruction of the wicked by fire. 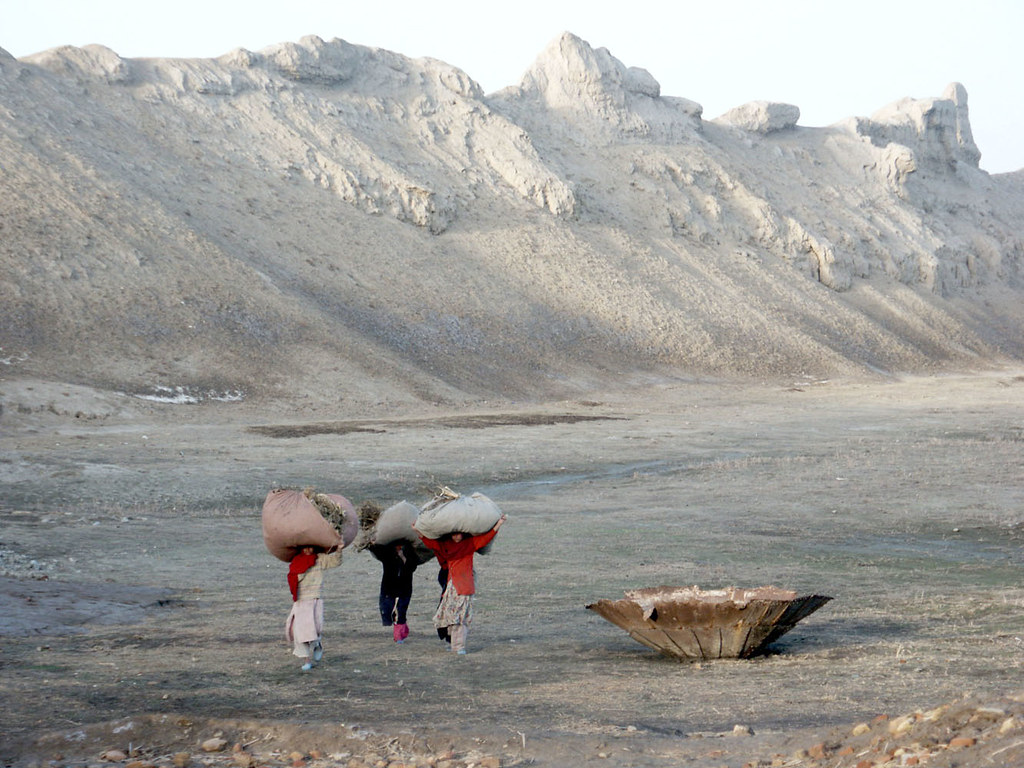 The divine fire will burn both the righteous and the wicked, but only the wicked will be hurt and neither will be destroyed.

During the eschatological inferno, the "followers of truth" will separate themselves from the wicked and ascend a mountain. The evil king who dominates the world will be angered on hearing this, and he will resolve to encircle the mountain with his army. The righteous implore to "Jupiter", who sends them a saviour, who will descend from heaven accompanied by angels and before him a flaming sword. Hystaspes "prophesies" that the wicked king will survive the destruction of his armies, but will lose power.

….the Sibyls openly say that Rome is doomed to perish, and that indeed by the judgment of God, because it held His name in hatred; and being the enemy of righteousness, it destroyed the people who kept the truth. Hystaspes also, who was a very ancient king of the Medes, from whom also the river which is now called Hydaspes received its name, handed down to the memory of posterity a wonderful dream upon the interpretation of a boy who uttered divinations, announcing long before the founding of the Trojan nation, that the Roman empire and name would be taken away from the world.