A Fellow of the Royal Society of Literature, he founded the Benson Medal in 1916, to be awarded "in respect of meritorious works in poetry, fiction, history and belles lettres". 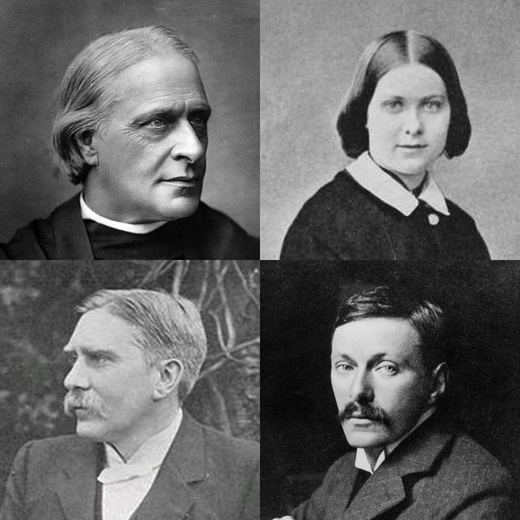 Benson was one of six children of Edward White Benson [top left], who was Archbishop of Canterbury from 1882–96 and the first headmaster of Wellington College, Berkshire and his wife Mary Sidgwick Benson, sister of the philosopher Henry Sidgwick.   The Benson family as a whole was exceptionally accomplished.  His brothers included Edward Frederic Benson, best remembered for his Mapp and Lucia novels, and Robert Hugh Benson, a priest of the Church of England before converting to Roman Catholicism, who wrote many popular novels. Their sister, Margaret Benson, was an artist, author, and amateur Egyptologist.

But their history was somewhat tragic: a son and daughter died young; and another daughter, as well as Arthur himself, suffered from a mental condition that was ‘possibly’ bipolar disorder, which they had inherited from their father. 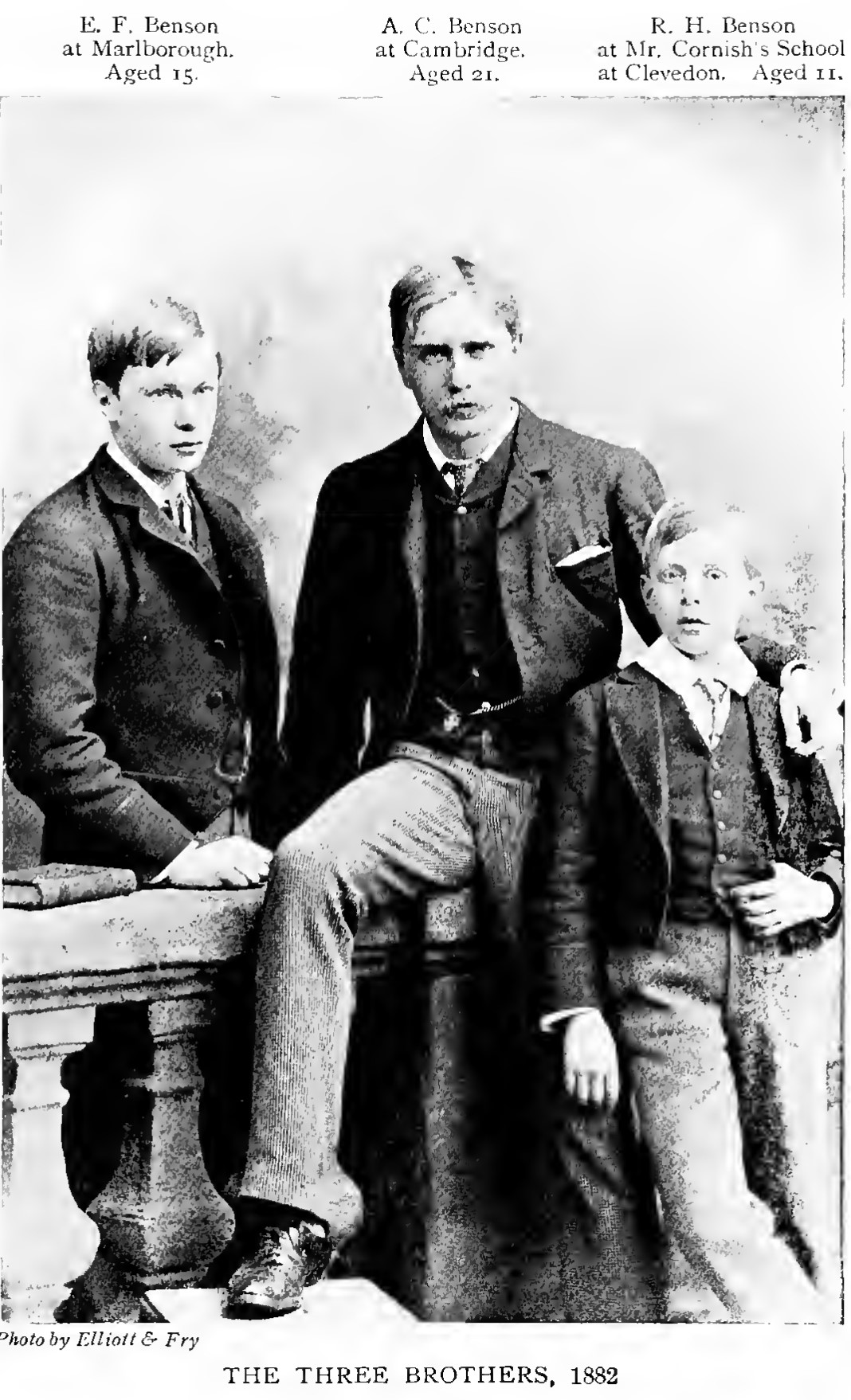 Benson suffered from 'hideous bouts' of depression, first at Eton in 1882 and then in 1908-09, 1918, and 1922. In poems sometimes neglected in his later collections (such as "Courage"), Benson gave expression to this disabling trauma.  None of the children married. Despite his illness, Arthur was “a distinguished academic and a prolific author”.

Manic depressives have an occasional tendency to be amoral and bisexual, and it appears that this tendency was present in the Benson family.  The following article almost implying that bipolar tendencies were stronger in A C Benson’s mother than his father.

The Benson family was one of the most extraordinary of Victorian England, and they certainly made sure that we have enough evidence to dwell on them. Edward White Benson was a brilliantly clever clerical young man of 23 when he proposed to his 11-year-old cousin Minnie Sidgwick. He had been the effective head of his family since his father’s death nine years earlier; Minnie, too, was fatherless. Despite doubts from Minnie’s mother, they agreed to marry when Minnie was 18. 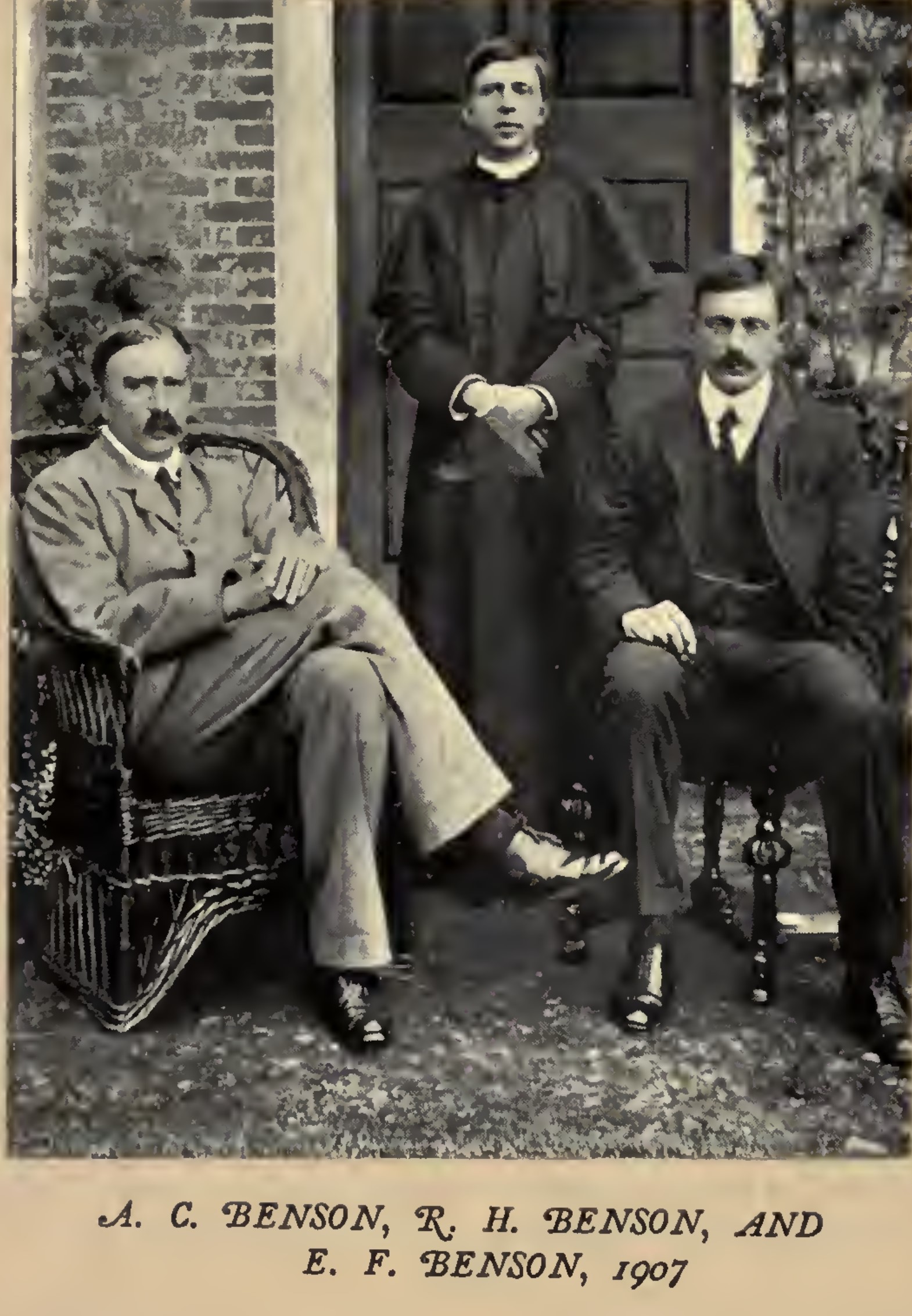 She, too, was clever — Gladstone famously described her as ‘the cleverest woman in Europe’ — but had no real attachment to Benson or to any other man. Her romantic passions were always directed towards women. Curiously, as Benson rose through the hierarchy of the Church of England, ending as Archbishop of Canterbury, Minnie Benson’s passions seem to have continued without abatement or comment. As soon as her husband died, she went to bed with Lucy Tait, the daughter of a previous Archbishop of Canterbury, and apparently stayed there.

Everyone seems to have known about this liaison and many others, and no one seems to have cared. One of Minnie’s sons, Fred, wrote about his mother and Lucy sleeping together much later; and created, too, as a sort of in-joke, a statuesque maid called Lucy, who catered to an enthusiastic lesbian painter, Quaint Irene, in his Mapp and Lucia novels. E.F. Benson — Fred’s publishing name — is now the best remembered of the Benson children; but all were extraordinary. None married. At least five of them were clearly lesbian or homosexual……………………… 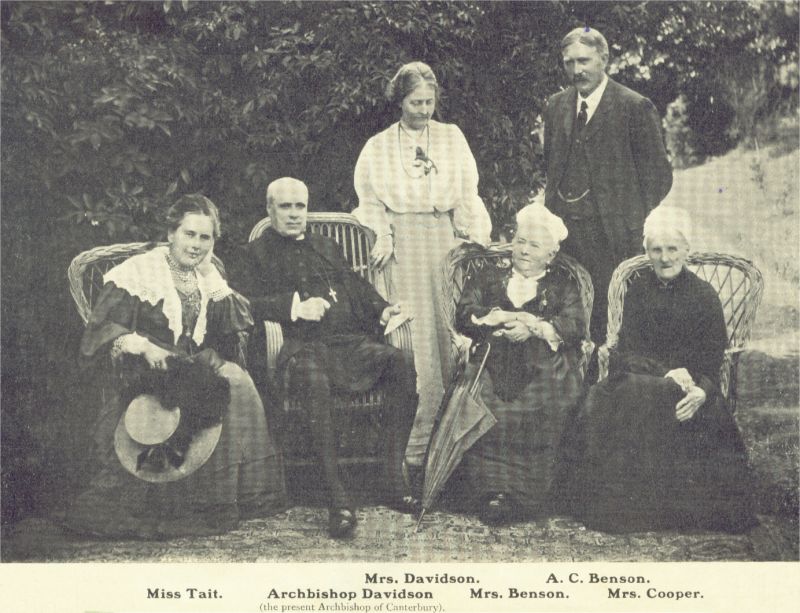 Arthur (A.C.) was a pillar of professional life, the distinguished editor of Queen Victoria’s letters [He collaborated with Lord Esher in editing the correspondence of Queen Victoria (1907)], remarkably dull in his published work and remarkably intense in his unpublished diaries. He was famous for passionate friendships with Cambridge undergraduates…………………The family has attracted considerable interest, and some biographers. …... A.C. Benson’s extant manuscript diary is three times the length of Proust……………Between them, they knew absolutely everyone, from Queen Victoria to Elgar. And A.C. wrote the words to ‘Land of Hope and Glory’ and invented King’s College’s Nine Lessons service. 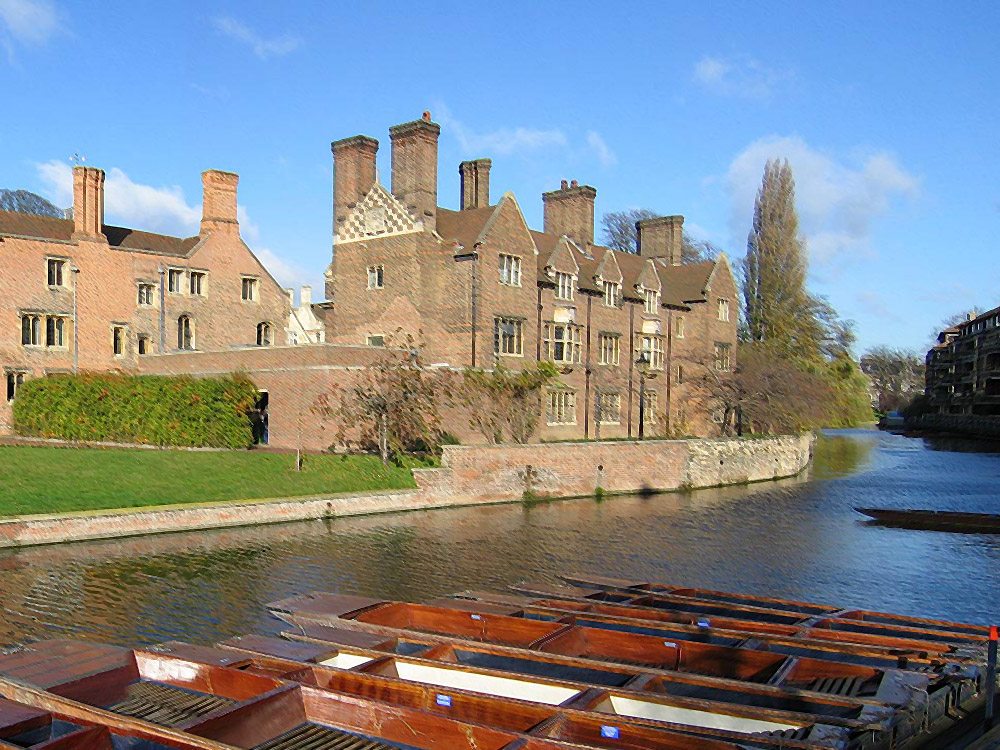 In 1874, he won a scholarship to Eton from Temple Grove School, a preparatory school in East Sheen. In 1881 he went up to King's College, Cambridge, where he was a scholar (King's College had closed scholarships for which only Etonians were eligible) and achieved first class honours in the Classical tripos in 1884. 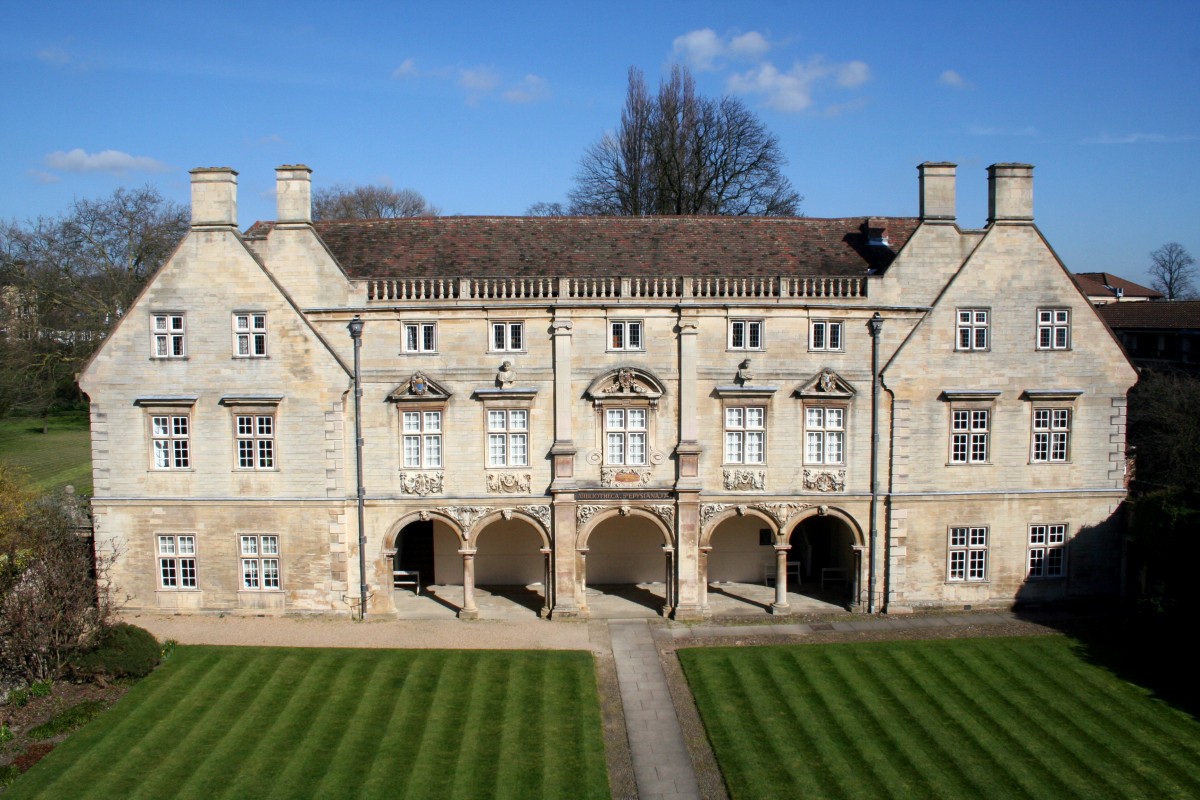 From 1885 to 1903 he taught at Eton, but returned to Cambridge in 1904 as a Fellow of Magdalene College to lecture in English Literature. He became president of the college (the Master's deputy) in 1912, and he was Master of Magdalene (head of the college) from December 1915 until his death in 1925. From 1906, he was a governor of Gresham's School.

The modern development of Magdalene was shaped by Benson. He was a generous benefactor to the college, with a significant impact on the modern appearance of the college grounds; at least twenty inscriptions around the college refer to him. In 1930, Benson Court was constructed and named after him.

Benson was also a member of the Alpine Club and this has relevance as one of the observations came to him as he was in the mountains. 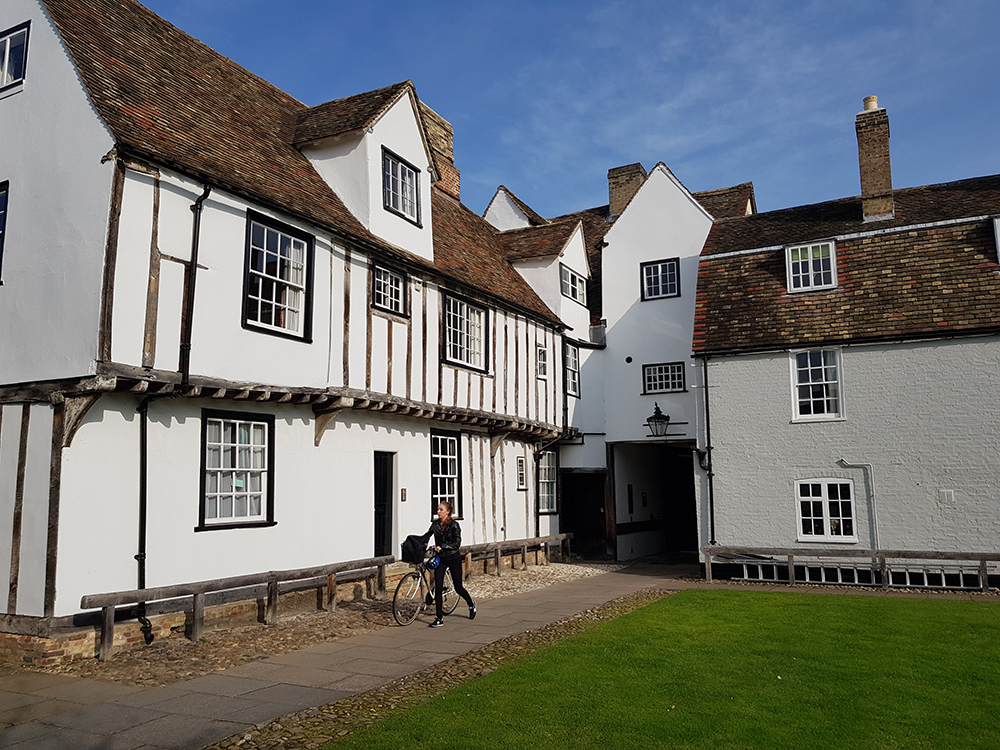 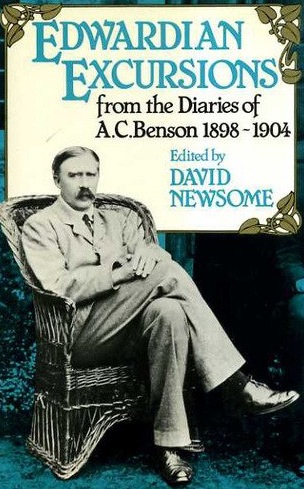 On June 17, 1925, Benson died of a heart attack, aged 63. He died at the Master's Lodge at Magdalene and was buried at St Giles's Cemetery in Cambridge.

He was remembered warmly every closing night of the London Proms at the Royal Albert Hall, which climaxed in a choric version of the patriotic "Land of Hope and Glory" -- audience joining in with performers. 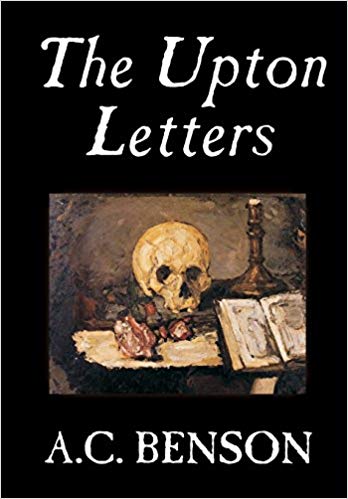 A C Benson’s poems and volumes of essays, such as From a College Window and The Upton Letters (essays in the form of letters) were famous in his time 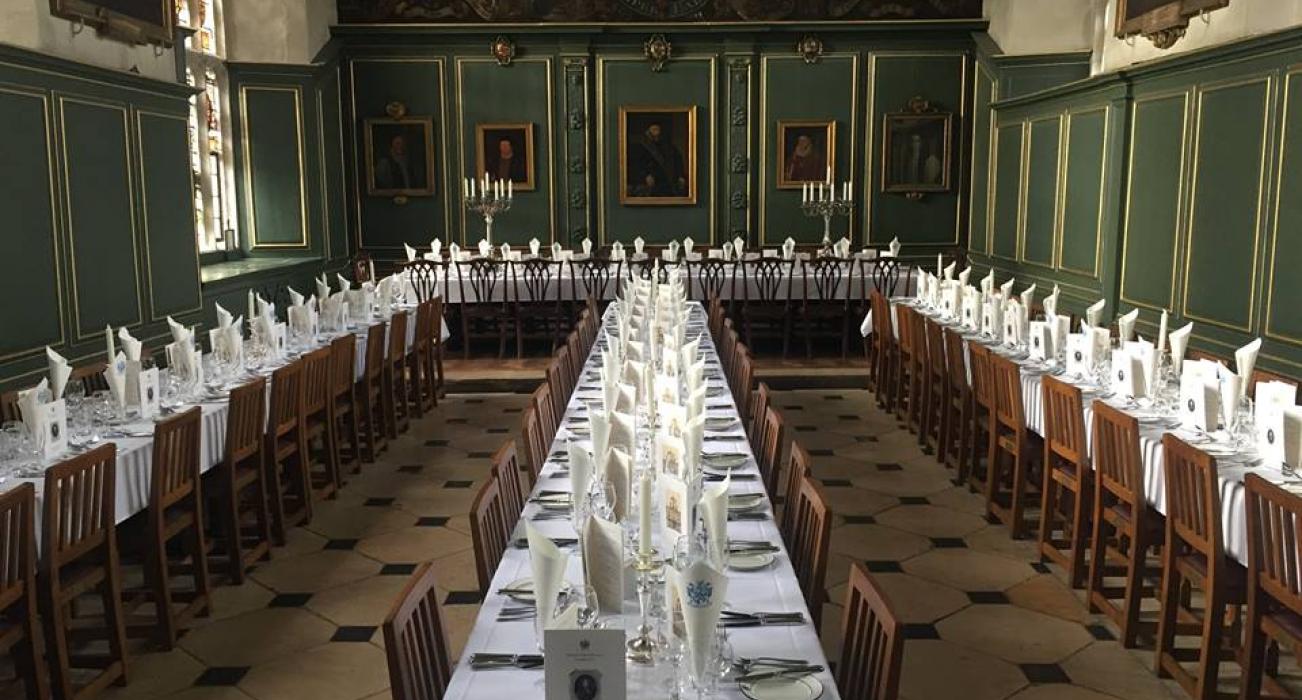