Grain can have the same symbolism as sand – that is grains of sand.  Both can also be  symbolic of atoms.

But the principle symbolism for a grain is the Soul.  The symbolism combines the idea of a granary which contains numerous little souls which pour down onto the Earth, where they sprout and grow only to be cut down when they are full grown by the Grim Reaper.

The symbolism is quite apt as we have children and a stalk of corn also has seeds which can be used for the next harvest.

In this we need to remember the analogy of a software package developer.  The master package is created and then lots of copies are sent out to be used.  Souls are copies of a human being master package, and symbolically are stored in the Granary, to be sown as and when needed. 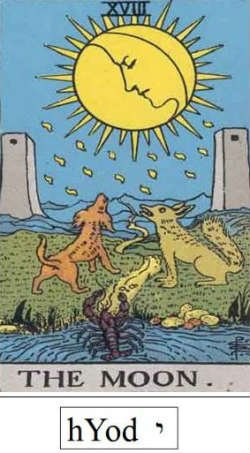 It is not unusual to see mixed symbolism in pictures where both the Granary and the Moon may be used - the Moon being another symbolic storer of souls.

In this version of the Tarot(right), the Moon is raining seeds onto the earth.  The grain here is in the shape of the Jewish letter Yodh.  Yodh or Yud is the smallest letter and much kabbalistic and mystical significance is attached to it. According to the Gospel of Matthew, Jesus mentioned it when he says: "One jot [that is Jot, Iota or Yud] or one tittle shall in no wise pass from the Law, till all be fulfilled."  So souls will not stop being created until the ‘plan’ - the Great Work -  is complete.

The Crowley Tarot [below] also shows the Yodh symbol as well as a crescent moon.  The symbolism here is extremely concise. 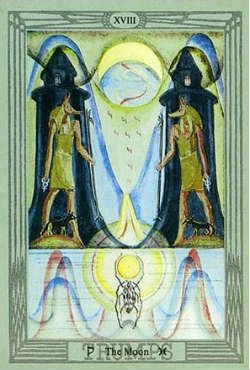