In 125 A.D. Apuleius experimented with a flickering light stimulus produced by the rotation of a potter's wheel, and found it could be used to induce 'a type of epilepsy'.

I shall now be so brave as to attempt a description of this marvellous form.  First she had an abundance of hair that fell gently in dispersed ringlets upon the divine neck.

A crown of interlaced wreaths and varying flowers rested upon her head; and in its midst, just over the brow, there hung a plain circlet resembling a mirror or rather a miniature moon, for it emitted a soft clear light.  This ornament was supported on either side by vipers that rose from the furrows of the earth and above it blades of grain were disposed.  Her garment, dyed many colours, was woven of fine flax.

One part was gleaming white, another was yellow as the crocus; another was flamboyant with the red of roses.  But what obsessed my gazing eyes by far the most was her pitch black cloak that shone with a dark glow.  It was wrapped round her, passing from under her right arm over the left shoulder and fastened with a knot like the boss of a shield.  Part of it fell down in pleated folds and swayed gracefully with a knotted fringe along the hem.  Upon the embroidered edges and over the whole surface sprinkled stars were burning and in the centre a mid month moon breathed forth her floating beams.  Lastly a garland wholly composed of every kind of fruit and flower clung of its own accord to the fluttering border of that splendid robe. 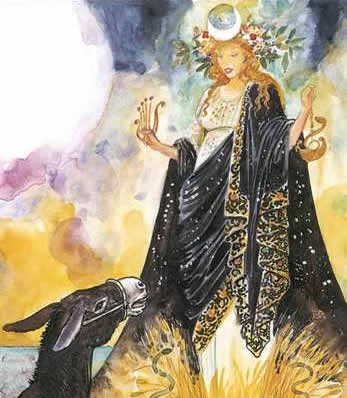