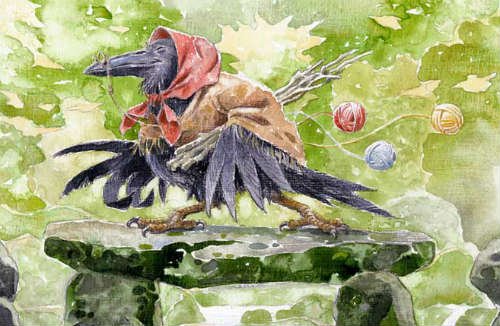 Crows take on the symbolism of all birds together with a number of characteristics that match the crows’ attributes.  Christianity has rather denigrated the crow until it has become associated in many people’s minds with evil, but this is not at all what crow symbolism shows us, nor how it was treated in olden days.  At one time the crow was greatly venerated - worldwide. 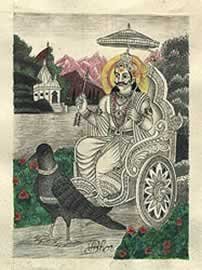 For example, it was venerated by the North American Indians as ‘the great civiliser and the creator of the visible world’.  It had a similar symbolic role for the Celts and the Germanic tribes, as well as in Siberia.   Hindu mythology is rich in shamanic figures and their mounts.

The Hindu god who chose the crow as his symbol or mount is Shani Graha.
Shani Devata is one of the ‘Navagrahas’, the nine primary celestial beings ruling their respective planets.
The Lord of Saturn, he is also the Lord of Saturday. He is referred to as  Shani Deva and is  the cousin of Yama, the God of Death.
Shani is depicted as being dark-complexioned. He is mostly shown mounted on a crow. 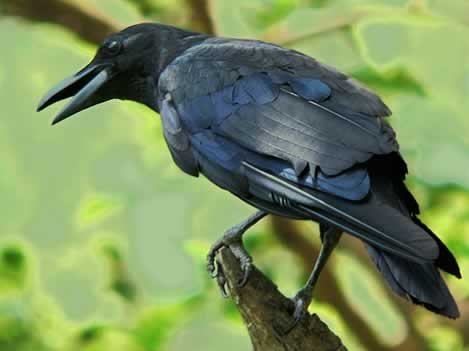 In all cultures it was revered for its ability to see the future – prophecy; hence its caw played a special part in rites of divination.

As a group, crows in ‘real life’ show remarkable examples of intelligence, and Aesop's fable of The Crow and the Pitcher  where he fills it with stones to get at the water [yes another symbolic tale] , shows that humans have long viewed the crow as an intelligent bird and a bird of the spirit. Crows and ravens often score very highly on intelligence tests. Certain species top the avian IQ scale. Wild hooded crows in Israel have learned to use bread crumbs for bait-fishing. Again in ‘real life’, one species, the New Caledonian Crow, is able to manufacture and use its own tools in the day-to-day search for food. These tools include 'knives' cut from stiff leaves and stiff stalks of grass. Another skill involves dropping tough nuts into a heavy trafficked street and waiting for a car to crush them open, and then waiting at pedestrian lights with other pedestrians in order to retrieve the nuts.

So symbolically crows are associated with intelligence.

Crows are also able to recognize one individual human from another by facial features.  So, though humans cannot tell crows apart, crows can recognize individual humans, and also intuitively know  "bad" humans  - they signal by squawking.

So more symbolism – the crow and intuition, the astute judge of character.

Another attribute of the crow is its kindness, which seems to go against its appearance which is somewhat foreboding.  But the  Compendium of Materia Medica states that crows are kind birds that feed their old and weakened parents.  This attribute of kindness and protection and the gift of prophecy are incorporated into Buddhist belief.

Avalokite?vara/Chenrezig, who is reincarnated on Earth as the Dalai Lama, is often closely associated with the crow.  When the first Dalai Lama was born, robbers attacked the family home. The parents fled and were unable to get to the infant Lama in time, but when they returned the next morning they found their home untouched, and a pair of crows were caring for the Dalai Lama. It is also believed that crows heralded the birth of the First, Seventh, Eighth, Twelfth and Fourteenth Lamas, the latter being the current Dalai Lama, Tenzin Gyatso.

The three legged crow seen in some pictures shows that the shaman has the ability to travel to all three worlds of the Trinity – Creator, Created and Implemented [us!]

So if I summarise.  If we find a shaman who in visions or trances ‘sees’ himself as a crow or uses crows as his helpers, then he has symbolically taken on the attributes of intelligence, the ability to astutely judge character and the gift of prophecy.  Crows are prophets.

The kindness, the intelligence, the resourcefulness, the ability to prophecy and the protective attributes make them ideal ‘guides’, providing sound advice and wisdom.

It should be noted that the one exception to this symbolism is the crow, as the carrion crow, which enjoys [if that is the right word] its own symbolic meaning - the role of destruction - this a crow may be a prophet of destruction.