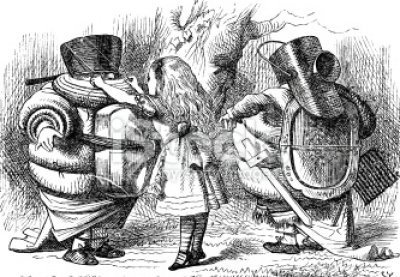 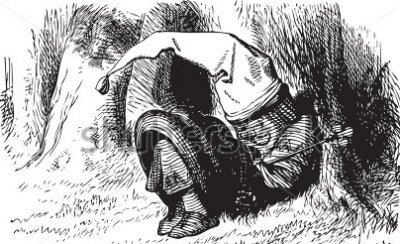 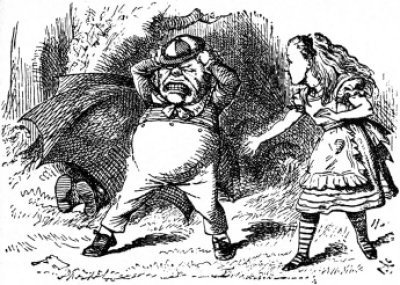 ' Here she checked herself in some alarm, at hearing something that sounded to her like the puffing of a large steam-engine in the wood near them, though she feared it was more likely to be a wild beast. 'Are there any lions or tigers about here?' she asked timidly.

'It's only the Red King snoring,' said Tweedledee.

'Come and look at him!' the brothers cried, and they each took one of Alice's hands, and led her up to where the King was sleeping.

Alice couldn't say honestly that he was. He had a tall red night-cap on, with a tassel, and he was lying crumpled up into a sort of untidy heap, and snoring loud--'fit to snore his head off!' as Tweedledum remarked.

'I'm afraid he'll catch cold with lying on the damp grass,' said Alice, who was a very thoughtful little girl.

Alice said 'Nobody can guess that.'

'Why, about YOU!' Tweedledee exclaimed, clapping his hands triumphantly. 'And if he left off dreaming about you, where do you suppose you'd be?'

'Where I am now, of course,' said Alice.

'Not you!' Tweedledee retorted contemptuously. 'You'd be nowhere. Why, you're only a sort of thing in his dream!'

'If that there King was to wake,' added Tweedledum, 'you'd go out--bang!--just like a candle!'

'I shouldn't!' Alice exclaimed indignantly. 'Besides, if I'M only a sort of thing in his dream, what are YOU, I should like to know?'

He shouted this so loud that Alice couldn't help saying, 'Hush! You'll be waking him, I'm afraid, if you make so much noise.'

'Well, it no use YOUR talking about waking him,' said Tweedledum, 'when you're only one of the things in his dream. You know very well you're not real.'

'I AM real!' said Alice and began to cry.

'You won't make yourself a bit realler by crying,' Tweedledee remarked: 'there's nothing to cry about.'

'If I wasn't real,' Alice said--half-laughing through her tears, it all seemed so ridiculous--'I shouldn't be able to cry.'

'I hope you don't suppose those are real tears?' Tweedledum interrupted in a tone of great contempt.

'I know they're talking nonsense,' Alice thought to herself: 'and it's foolish to cry about it.' So she brushed away her tears, and went on as cheerfully as she could. 'At any rate I'd better be getting out of the wood, for really it's coming on very dark. Do you think it's going to rain?'

Tweedledum spread a large umbrella over himself and his brother, and looked up into it. 'No, I don't think it is,' he said: 'at least—not under HERE. Nohow.'

'But it may rain OUTSIDE?'

'It may--if it chooses,' said Tweedledee: 'we've no objection. Contrariwise.'

'Selfish things!' thought Alice, and she was just going to say 'Good-night' and leave them, when Tweedledum sprang out from under the umbrella and seized her by the wrist.

'Do you see THAT?' he said, in a voice choking with passion, and his eyes grew large and yellow all in a moment, as he pointed with a trembling finger at a small white thing lying under the tree.

'It's only a rattle,' Alice said, after a careful examination of the little white thing. 'Not a rattleSNAKE, you know,' she added hastily, thinking that he was frightened: 'only an old rattle--quite old and broken.'

'I knew it was!' cried Tweedledum, beginning to stamp about wildly and tear his hair. 'It's spoilt, of course!' Here he looked at Tweedledee, who immediately sat down on the ground, and tried to hide himself under the umbrella.

Alice laid her hand upon his arm, and said in a soothing tone, 'You needn't be so angry about an old rattle.'

'But it isn't old!' Tweedledum cried, in a greater fury than ever. 'It's new, I tell you--I bought it yesterday--my nice new RATTLE!' and his voice rose to a perfect scream.

All this time Tweedledee was trying his best to fold up the umbrella, with himself in it: which was such an extraordinary thing to do, that it quite took off Alice's attention from the angry brother. But he couldn't quite succeed, and it ended in his rolling over, bundled up in the umbrella, with only his head out: and there he lay, opening and shutting his mouth and his large eyes--'looking more like a fish than anything else,' Alice thought.

'Of course you agree to have a battle?' Tweedledum said in a calmer tone.

'I suppose so,' the other sulkily replied, as he crawled out of the umbrella: 'only SHE must help us to dress up, you know.'

So the two brothers went off hand-in-hand into the wood, and returned in a minute with their arms full of things--such as bolsters, blankets, hearth-rugs, table-cloths, dish-covers and coal-scuttles. 'I hope you're a good hand at pinning and tying strings?' Tweedledum remarked. 'Every one of these things has got to go on, somehow or other.'

Alice said afterwards she had never seen such a fuss made about anything in all her life--the way those two bustled about--and the quantity of things they put on--and the trouble they gave her in tying strings and fastening buttons--'Really they'll be more like bundles of old clothes than anything else, by the time they're ready!' she said to herself, as she arranged a bolster round the neck of Tweedledee, 'to keep his head from being cut off,' as he said.

'You know,' he added very gravely, 'it's one of the most serious things that can possibly happen to one in a battle--to get one's head cut off.'

Alice laughed aloud: but she managed to turn it into a cough, for fear of hurting his feelings.

'Do I look very pale?' said Tweedledum, coming up to have his helmet tied on. (He CALLED it a helmet, though it certainly looked much more like a saucepan.)

'I'm very brave generally,' he went on in a low voice: 'only to-day I happen to have a headache.'

'And I'VE got a toothache!' said Tweedledee, who had overheard the remark. 'I'm far worse off than you!'

'Then you'd better not fight to-day,' said Alice, thinking it a good opportunity to make peace.

'We MUST have a bit of a fight, but I don't care about going on long,' said Tweedledum. 'What's the time now?'

Tweedledee looked at his watch, and said 'Half-past four.'

'Let's fight till six, and then have dinner,' said Tweedledum.

'Very well,' the other said, rather sadly: 'and SHE can watch us—only you'd better not come VERY close,' he added: 'I generally hit everything I can see--when I get really excited.'

'And I hit everything within reach,' cried Tweedledum, 'whether I can see it or not!'

Alice laughed. 'You must hit the TREES pretty often, I should think,'she said.

Tweedledum looked round him with a satisfied smile. 'I don't suppose,'he said, 'there'll be a tree left standing, for ever so far round, by the time we've finished!'

'And all about a rattle!' said Alice, still hoping to make them a LITTLE ashamed of fighting for such a trifle.

'I shouldn't have minded it so much,' said Tweedledum, 'if it hadn't been a new one.'

'I wish the monstrous crow would come!' thought Alice.

'There's only one sword, you know,' Tweedledum said to his brother: 'but you can have the umbrella--it's quite as sharp. Only we must begin quick. It's getting as dark as it can.'

It was getting dark so suddenly that Alice thought there must be a thunderstorm coming on. 'What a thick black cloud that is!' she said. 'And how fast it comes! Why, I do believe it's got wings!'

'It's the crow!' Tweedledum cried out in a shrill voice of alarm: and the two brothers took to their heels and were out of sight in a moment.

Alice ran a little way into the wood, and stopped under a large tree. 'It can never get at me HERE,' she thought: 'it's far too large to squeeze itself in among the trees. But I wish it wouldn't flap its wings so--it makes quite a hurricane in the wood--here's somebody's shawl being blown away!'